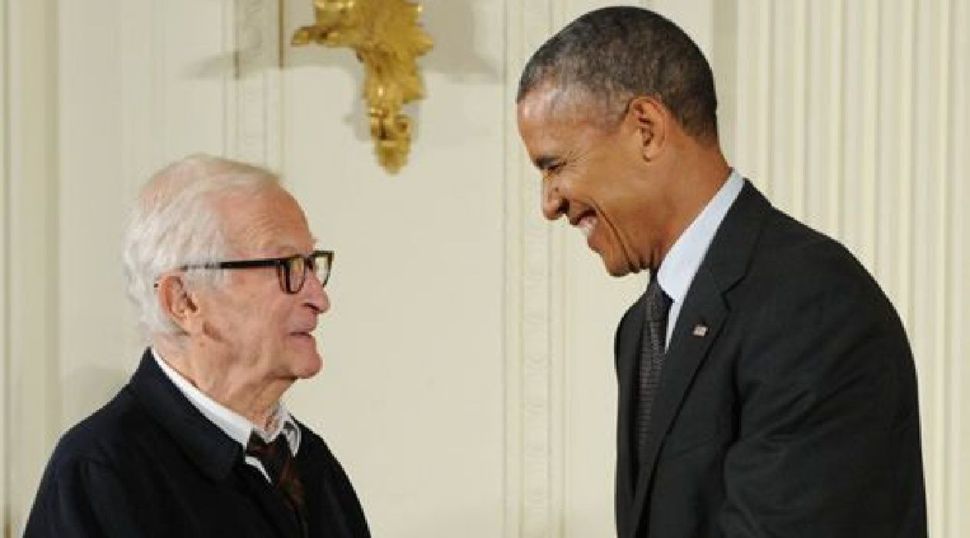 The American Jewish filmmaker Albert Maysles, who died on March 6 at age 88, received the National Medal of Arts in 2014 for his celebrated documentaries on the Beatles; the Rolling Stones; and the reclusive relatives of Jacqueline Kennedy Onassis in “Grey Gardens.”

Yet arguably, the most enduring inspiration for Maysles’s artistry was from Yiddishkeit. His mother was born in Slutsk, then part of Poland and now in Belarus, while his father was from the Ukraine, from a town “near Chernobyl,” as Maysles recalled in 2004 to interviewers from the Web of Stories. The parents came to America as small children, where they instilled ethical values in Albert, born in Boston in 1926, and his brother and filmmaking partner David (1931–1987), who would die prematurely of a stroke. In kindergarten, Albert provoked the ire of his schoolteacher by refusing to salute the flag, a gesture he felt from his parents’ recollections of the obligatory tyrannical patriotism of the Old Country, was un-American. Even at a young age, he was able to explain himself adequately to persuade the school principal of the reasonableness of his position, and he was excused from further such patriotic display.

As immigrants, Maysles’s parents struggled professionally. His father labored as a postal clerk, putting aside his dream of being a professional cornet player, despite his great love for music. His mother was a schoolteacher who when the family moved to Brookline, Massachusetts, found that the district never employed full-time Jewish teachers. She had to settle for the lowly rank of substitute instructor. At age 8 or 9, Maysles learned from a visiting Russian relative about the Dreyfus Affair and the Beilis case. Much later, Maysles’s “Scapegoat on Trial: Searching for Mendel Beilis” (2005) explored the notorious 1913 trials in which a Russian Jew was accused of the centuries-old blood libel, supposedly using the blood of Christian children to bake matzot for Passover. More than a mere historical echo, Maysles’s film underlines how such primitive lies are still circulated by Hamas and other anti-Semitic organizations.

Maysles recalled to the Web of Stories that at age eleven, his brother announced “that he couldn’t play with his friend Jamie any more because his mother told Jamie that no, you can’t play with a Jew boy. And so much before that even I was experiencing the anti-Semitism of that time. At the time there was a Catholic priest by the name of Father Coughlin who, every Sunday, would broadcast an hour speech which was broadcast over 435 radio stations and all of it total anti-Semitism.”

Another reminder “in an official way this time that anti-Semitism was going to be part of my life” occurred when cutting across railway tracks on his way to Hebrew School, Maysles was caught and threatened by a security guard who took the trouble to ask the boy first if he was “Irish or Jewish.” When Albert walked his Orthodox grandmother to the synagogue each shabbat, when she passed the Catholic Church “she would spit on the sidewalk each time we walked by there. So I wasn’t the first one in the family to experience anti-Semitism and I’m sure that there was a very compelling reason for both of my families to leave Eastern Europe,” Maysles added.

Yet his roots could also be the source of great joy, as Maysles realized when his father would delight in listening to music. Such moments would inspire Maysles’ extraordinarily sensitive and receptive films about music, such as “Journey to Jerusalem” (1968), made three weeks after Israel’s Six-Day War, when Leonard Bernstein rehearsed and performed a concert on Mount Scopus; played by Isaac Stern and the Israel Philharmonic. His later “Vladimir Horowitz: The Last Romantic” (1985) and “Horowitz Plays Mozart” (1987) are likewise informed with understanding of the healing powers of music. Prey to his own emotional troubles, Horowitz, the famed piano virtuoso, was in some obscure way akin to the fragile, vulnerable protagonists of “Grey Gardens.” The non-judgmental Maysles approach to mental troubles found its roots in his early training in psychology, a subject he taught at Boston University for three years, culminating in an early TV documentary, “Psychiatry in Russia” (1955), a further search into his family past, to understand the lunacy of the anti-Semitism historically inflicted on his family.