A Tale of Two Netanyahus, One Play and One Speech 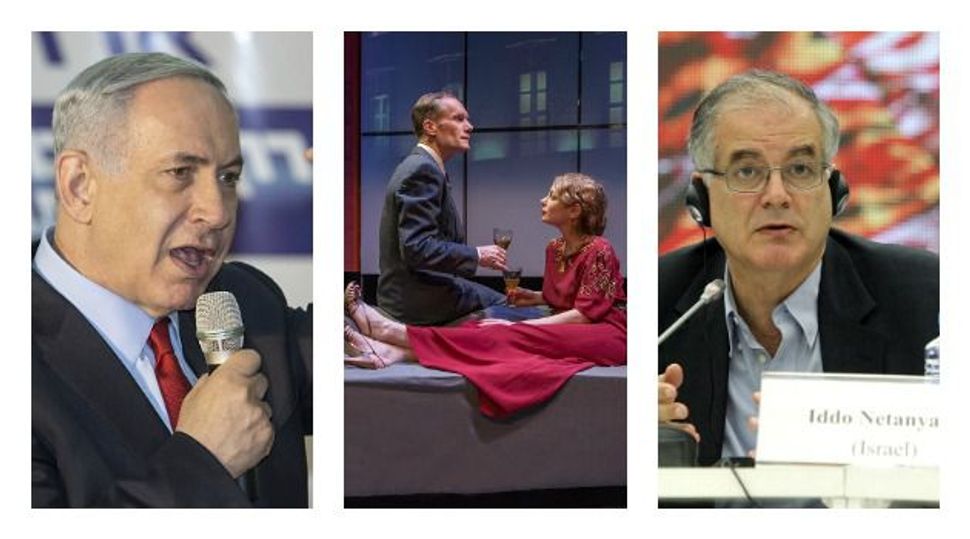 About a third of the way into “A Happy End” — Iddo Netanyahu’s play about a Jewish physicist’s family that naively chooses to remain in Berlin in the 1930’s — there’s a brief discussion about the impossibility of simultaneity. Young Hans Erdman reveals to his parents, Mark and Leah Erdman, that his anti-Semitic high school science teacher has upbraided him for daring to cite the scientific theories his father has taught him.

“I guess your teacher hasn’t yet heard of relativity,” Mark Erdman tells his son.

Still, science aside, the play and the timing of its Off-Broadway premiere at Abingdon Theatre Company, do serve to draw attention to two parallel, if perhaps not simultaneous, phenomena: “A Happy End” began performances during the same week that the playwright’s older brother Israel Prime Minister Benjamin Netanyahu was in Washington addressing the U.S. Congress, and offering some drama of his own.

Using the term “political theater” offers a rather cynical gloss on Netanyahu’s address and its speaker’s motives. It suggests the Prime Minister was using theatrical conventions — appealing to emotions (“never again”), utilizing props (e.g. Elie Wiesel), establishing heroes (Queen Esther; Harry Truman) and villains (Haman; Ayatollah Khamenei) — in the services of specific political goals, i.e. bolstering support in his political campaign while scuttling a potential nuclear deal between the U.S. and Iran. I’ll spare you any discussion of the relative merits and liabilities of such a characterization — we’re in the culture section and there’s been more than enough written on this topic elsewhere.

Nevertheless, a distinction needs to be made between effective political theater and effective theater about politics. We tend to flatter our politicians and our dramas about them by calling them “Shakespearean.” U.S. News Weekly wrote earlier this year that Mitt Romney’s decision to drop out of the 2016 presidential campaign was “driven by a dash of Shakespearean fatalism.” In the New York Daily News, the rise and fall of Anthony Weiner was called “the stuff of Shakespearean tragedy”; Sarah Palin has been credited with supplying “irony of Shakespearean proportions”; David Brooks has described Benjamin Netanyahu’s story as Shakespearean too (in his version, Sara Netanyahu plays the role of Lady Macbeth). A Nexis search of “Barack Obama” and “Hamlet” yields more than 3,000 hits. Full disclosure #1: I like Obama fine. Full disclosure #2: Hamlet, he ain’t.

For the most part, our contemporary political leaders remain, at best, pale imitations of Shakespearean characters. Their speeches make for, perhaps, good “political theater,” but they lack the spark and originality of actual drama. Theater, at its best, elevates, provokes, challenges, surprises —risky in politics. Which is why plays and movies like, say, “Frost/Nixon” or “Primary Colors” tend to be so crashingly dull and seemingly inconsequential no matter how many times critics call them Shakespearean. For, what is most effective in political theater — simplicity, predictability — tends to be deadly in drama. And what can make drama interesting — nuance, contradiction, imagination —is mostly undesirable in politics.

Which brings us back to Iddo Netanyahu’s play — a solid, well-constructed work in the lesser, late-period Arthur Miller mold. It’s concise and erudite, clearly the product of an estimable intellect (the author is also a physician who divides time between Israel and the U.S.). And Abingdon Theatre’s production, under the direction of Alex Dmitriev, is both respectful and respectable; its performers are competent and professional. But, as with Benjamin Netanyahu’s speech, the play is also schematic, obvious and familiar. It tells us what we already know in language we’ve heard before. The play’s reversals and revelations are telegraphed. Its language is lofty and stagey without being memorably theatrical or poetic. Its mercurial and unfaithful female characters are, shall we say, not entirely satisfying. Its doggedly intellectual and uncompromising men are, shall we say, not entirely credible. In addressing Congress, Benjamin Netanyahu spoke of Nazi Germany and Persia to underscore the severity and timelessness of the Iranian threat. With “A Happy End,” Iddo Netanyahu may or may not be attempting to draw our attention to the current situation in Israel, but his unimaginative plotting and familiar characterizations undercut such an argument anyway by making it seem contrived and dated. The youngest person I spotted in the play’s audience was Rabbi Shmuley Boteach.

In the end, and perhaps worst of all, unlike Benjamin Netanyahu’s speech, Iddo Netanyahu’s play seems unlikely to provoke or inspire any great emotional response. Maybe it’s not entirely fair to compare simultaneously (if such a thing is possible) a prime minister’s speech with a playwright’s drama but “A Happy End” remains a stolid affair on stage for many of the same reasons that his brother’s speech seemed to succeed in Congress. What’s good for political theater isn’t always good theater.

A Tale of Two Netanyahus, One Play and One Speech