Not Your Bubbe’s Brooklyn 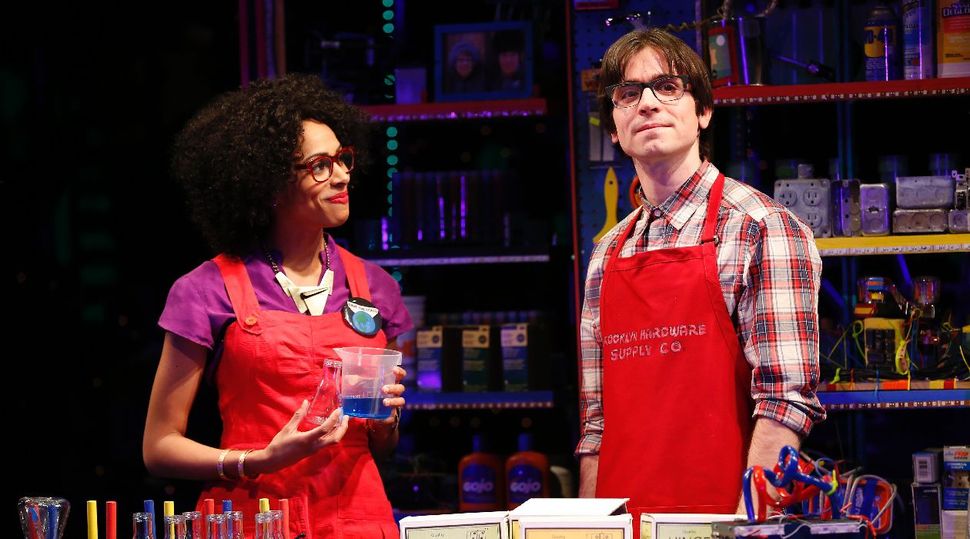 Louder Than a Speeding Bullet: Nicolette Robinson and Matt Doyle in the new musical ‘Brooklynite.’ Image by Vineyard Theatre

This theatrical season has seen not one but two musicals about superheroes in Brooklyn. The first, Itamar Moses, Michael Friedman and Daniel Aukin’s “The Fortress of Solitude,” which was mounted by the Public Theater in the fall, was a soulful, nuanced look at what’s been lost and discarded in the transition of the borough into the global brand that it’s become. The second, the trifle that is “Brooklynite,” Peter Lerman and Michael Mayer’s new show at the Vineyard, is a fawning and self-congratulatory ode to that brand.

Whereas “Fortress,” adapted from Brooklyn-centric author Jonathan Lethem’s novel of the same name, attempted to grapple with the reality of change in a city overflowing with disparate cultural and economic communities, “Brooklynite” aspires to nothing more than inspired goofiness. It strives to vapidly entertain, to celebrate the splendor that Brooklyn has become.

If “Fortress of Solitude” was about gentrification, Brooklynite is a symptom of it. It plays like a real estate brochure, full of shoutouts to the selling points from developers. Within the first five minutes someone proclaims she’s opening an artisanal cheese shop. There’s talk of the Park Slope Food Coop (of course) and the strollers that clog that neighborhood’s streets. Characters name-drop Peter Lugar, discuss their favorite vegan farm-to-table restaurants in Prospect Heights and roll their eyes indulgently at the artist collectives in Red Hook. They long for affordable brownstones in Bed-Stuy and winkingly mock the G train.

The conceit of the plot is that ten years ago, a radioactive, gamma-ray containing substance called Brooklynite smashed into the Gowanus Canal, emitting “Ditmas particles” and creating something called the “Gowanus Effect,” which turned a few people within its radius into superheroes. This group, which calls itself the Legion of Victory, consists primarily of lily-white transplants from elsewhere. There’s El Fuego (Andrew Call), the fire wielder, whose background isn’t fleshed out but whose body language and douche-y self-regard reminded me of those finance guys who troll Williamsburg for hipster girls on Friday and Saturday nights. There’s Blue Nixie (Grace McLean), the water sculptor, a high-strung woman who’s supposedly from Coney Island but seems more like someone who would only have been out there to show off the hard work she put into her costume for the Mermaid Parade. There’s Kid Comet (Gerard Canonico), a former bike messenger who can run really fast now. Even the one black member of the Legion, Astrolass (the game and talented Nicolette Robinson, who does her best with the material she’s been given), is a transplant from Ohio. The single native Brooklynian in the crew is Avenging Angelo (Nick Cordero), who — fuhgeddaboudit — embodies Bensonhurst pride in all its stereotypical brutishness, has no real powers and is only allowed to parallel park for the group.

Since the Legion arrived in town, crime has plummeted and the borough has undergone a glorious transformation. As the mayor (Tom Alan Robbins, doing his best Marty Markowitz impression) says, “Ever since they arrived, Brooklyn’s been transformed into a great place … This [is the] new Brooklyn you helped to create.”

And there we have the problematic assumption on which the zany hijinks will be based — that of course Brooklyn is better now than it once was, and thank god for all those eager moneyed transplants from Wesleyan, Oberlin and lesser schools who have washed away the scrappy snarling problematic people who used to rule the streets.

But wait. One Brooklyn native wants to join the Legion of Victory. It’s young Trey Swieskowski, a sad sack who shockingly never graduated from college — instead dedicating his time to running his parents’ failing hardware store after they were murdered in cold blood. As played by Matt Doyle, he’s eager and innocent and unendingly naïve, but with a good heart, of course. The problem is that he has no superpowers — and why would he? He’s just a poor boy from Brooklyn. If only he could transform himself into the sort of person worthy of their ranks! Hmmm. Well, he’s got the fashion down: converse sneakers, shaggy center-parted hair, a fitted plaid shirt and Franzen glasses.

While Trey struggles to gain Legion membership, Avenging Angelo, sick of being taken for granted by the group, drops out and goes over to the dark side. He conscripts a gang of nerdy PhD students to help him do battle. They’re as diverse as a City College subway ad. And if this weren’t a goofy superhero story, you’d be tempted to suspect that they have a legitimate beef with the self-proclaimed heroes who’ve taken over their city. But it is a goofy superhero story, so you can’t. You just have to accept that, of course, the swarthy scholarship kids — the too ethnically Jewish, the black and the South Asian — are the sniveling villains.

Anyway, there’s much fretting about the possibility of Brooklyn regressing to its dangerous mean. One character actually says, “Do you want Brooklyn to become second rate (again)? What if Manhattan becomes the really nice place to live?”

As it turns out, Trey Swieskowski is (you guessed it) the only one who can save Brooklyn from this terrifying fate, but to do so he must give up his dream of ever gaining superpowers. No worries. Losing out on his chance to become a superhero in his own right, Trey realizes his real purpose in life is to open a Superhero Supply Company. Like every hipster with an entrepreneurial dream, he’ll save the world, I’m sure.

Given that this is Brooklyn we’re talking about, “Brooklynite” must — and does! — come armed with literary bona fides. It’s based on characters created by Bay Area super-Jews Michael Chabon and Ayelet Waldman, though what this exactly implies remains unclear. And in a neat bit of synergistic cross-marketing, the Brooklyn Superhero Supply Company that Trey transforms his hardware store into is an actual store located in Park Slope, part of Bay Area impresario Dave Eggers’s empire of whimsical, good-intentioned business ventures — this one houses the afterschool creative writing center 826NYC.

Though I don’t begrudge these West Coast worthies their appropriation of Brooklyn cool, and I recognize that their involvement with the musical is incidental at best, I do wonder what they would make of this same show if it were giving the gloss to a place they know better — say Oakland, the Brooklyn of Northern California.

Not Your Bubbe’s Brooklyn