The Rocky Rise of J Street 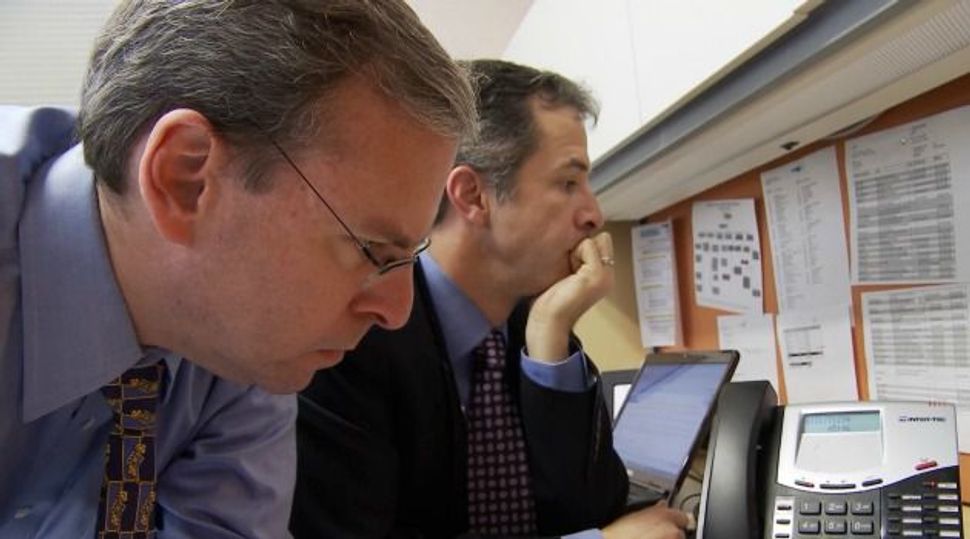 J Street leader Jeremy Ben-Ami speaks in the group’s Washington headquarters. Image by J Street: The Art of the possible

There’s no doubt that J Street has shaken up American Jewry. Since its inception in 2008 as a lobby, political action committee, educational group and student movement, the organization has disrupted the debate about what it means to be pro-Israel.

Now a new documentary, “J Street: The Art of the Possible,” produced and directed by Ken Winikur and Ben Avishai, chronicles a portion of J Street’s nascent period in 2010 and 2011, through the American midterm elections and the first round of U.S.-sponsored Israeli-Palestinian negotiations. Winikur’s previous work includes “Bet Herut: the End of the Beginning,” a documentary about the decline of the socialist Zionist movement in Israel. Avishai is the son of the writer Bernard Avishai, author of “The Hebrew Republic” and an advisor to this project.

After premiering in February at the Atlanta Jewish Film Festival, the film will screen in March at the American Documentary Film Festival in Palm Springs, California. Made in the observational cinema vérité style, the camera follows J Street President Jeremy Ben-Ami, as well as other advisors and activists, examining the work of the organization through its strategy meetings and fieldwork in the community. (Ben-Ami’s meetings on Capitol Hill and in the White House were closed to the filmmakers.)

Through this technique, “J Street: The Art of the Possible” clearly shows how, in breaking with the traditional model of always standing in lockstep with the Israeli government, J Street provoked an almighty backlash within the American Jewish community from many of those with the loudest voices.

Alan Dershowitz, in a head-to-head debate with Ben-Ami, accuses the organization of “providing cover for a lot of people who are not pro-Israel.” At a meeting in Florida designed to introduce J Street to the community there, J Street’s support of Pennsylvania Senate candidate Joe Sestak is vociferously questioned. “Joe Sestak is an anti-Semite and he is anti-Israel,” an older audience member insists, before a fight breaks out. In Boston, an evening with Jeremy Ben-Ami in a synagogue is cancelled at short notice due to opposition within the congregation.

Indeed, the reaction to J Street has been so strong that this is not even the first documentary to be made about the organization. In early 2014, Americans for Peace and Tolerance, a 501(c)(3) not-for-profit group founded by Charles Jacobs and run out of Boston, released “The J Street Challenge.” Featuring Alan Dershowitz, Caroline Glick and Noah Pollak as talking heads, the documentary “accuse[d] J Street of ‘dividing the Jewish community,’ of being ‘imperialistic’ and of manifesting ‘arrogance’ in their views on Middle East peace,” Nathan Guttman reported in these pages. A statement from J Street issued in response to the movie said it contained “numerous inaccuracies, distortions and outright lies.”

Today, caught between growing support and an augmented opposition, J Street finds itself among the mainstream of American Jewry, albeit with reservations. “There are many things about J Street I dislike. I think some of its members actually don’t like Israel very much,” Jeffrey Goldberg wrote in the Atlantic. “Many J Street supporters are cringing Diaspora Jews who are embarrassed by displays of Jewish muscularity, those displays of muscularity that are warranted as well as those displays that are unwarranted.”

“But: J Street is still a Zionist organization,” Goldberg concluded, noting the symmetry between the views of J Street and then-Israeli President Shimon Peres and other members of the peace camp. “Those Israelis, and those American Jews, who believe that J Street, and the spirit it represents, are fleeting phenomena have absolutely no idea what is happening in the Jewish world.”

J Street, it is clear, is very much part of the discussion. It is in the room. It is in America’s synagogues and community centers, and on its college campuses. To that extent, J Street can say it has succeeded. However, what isn’t clear from “J Street: The Art of the Possible” is what victories J Street as a lobby and an advocacy organization has had. It is difficult to discern whether that is a reflective of J Street or a shortcoming of the documentary, but the film struggles to pinpoint a moment when J Street has directly influenced American policy on Israel and the peace process.

Throughout the film, direct negotiations between Israelis and Palestinians are initiated at the behest of the United States. Is J Street responsible for this? Only if you can believe that such negotiations wouldn’t have happened without them.

“J Street: The Art of the Possible” also highlights the organization’s blunders, like its support in February 2011 of a United Nations resolution condemning settlement construction, which AIPAC opposed and the United States vetoed. It made J Street appear impotent and incompetent, and did nothing to help its image.

It is helpful here to compare J Street and AIPAC, the main player in Washington, on matters relating to Israel. It is often supposed that the strength of AIPAC as a lobbying organization exists in and of itself, and that it has used this authority to influence the White House, members of Congress, and American public opinion, and has bent American foreign policy in Israel’s favor. This is certainly the opinion of those whose views of pro-Israel groups in Washington bear an alarming resemblance to older hatreds and conspiracy theories.

Rather, AIPAC has the appearance of a powerful lobby because it is pushing at an open door. It is encouraging support in Congress for something that the majority of the American public already supports. When asked to choose between Israel and Palestinians, 51% of Americans say they sympathize with Israel, and only 14% with the Palestinians.

When AIPAC has tried to go against consensus opinion on the Middle East in recent years it has been burned, undercutting the myth of the omnipotent Israel lobby. In February 2014, it was forced to retreat its support for a bill that would have placed additional sanctions on Iran in the face of Democratic opposition in Congress. A Pew poll taken in December 2013 found that 50% of Democrats and 60% of liberals approved of the interim nuclear agreement with Iran.

J Street’s problem is that, among the American public, belief in the possibility of a two-state solution lags behind sympathy for Israel. When last surveyed in April 2014, 46% of Americans believed Israel and a Palestinian state could coexist peacefully, down from 50% when polled in the spring of 2013. J Street, then, is pushing for something that fewer and fewer Americans believe is attainable, putting them in a more difficult position with members of Congress who want the backing of their constituents.

J Street’s other big problem is that since 2009, they have found themselves advocating for something that the Israeli government does not support. That the security relationship between Israel and the United States has never been closer or stronger, in spite of whatever friction exists within the bilateral relationship on policy matters, is to AIPAC’s clear benefit as a lobbying organization.

But for J Street, in spite of Prime Minister Benjamin Netanyahu’s 2009 address at Bar-Ilan University in which he used the words “Palestinian state” for the first time, and in spite of the two rounds of negotiations that have taken place since Obama took office, it is evident that any government led by Netanyahu will not address the issue of Palestinian statehood in any serious or meaningful way. So long as Netanyahu is prime minister of Israel, J Street will be confined to the margins of government-level discussions between Israel and the United States.

J Street has been going at it now in Washington for almost seven years. But the question remains as to what concrete successes it can show its supporters. This new documentary cannot answer that question. It is one thing to shake things up at the community level, to start a debate on the very nature of American Zionism. It is another to have the tacit support of the present administration, as evidenced by Joe Biden’s appearance at J Street’s conference in 2013. But it isn’t quite clear from “The Art of the Possible” what, for J Street, “the possible” actually is.

Liam Hoare is a freelance writer based in the United Kingdom.

The Rocky Rise of J Street