Some of Abe Lincoln’s Best Friends Were Jewish. Honestly. 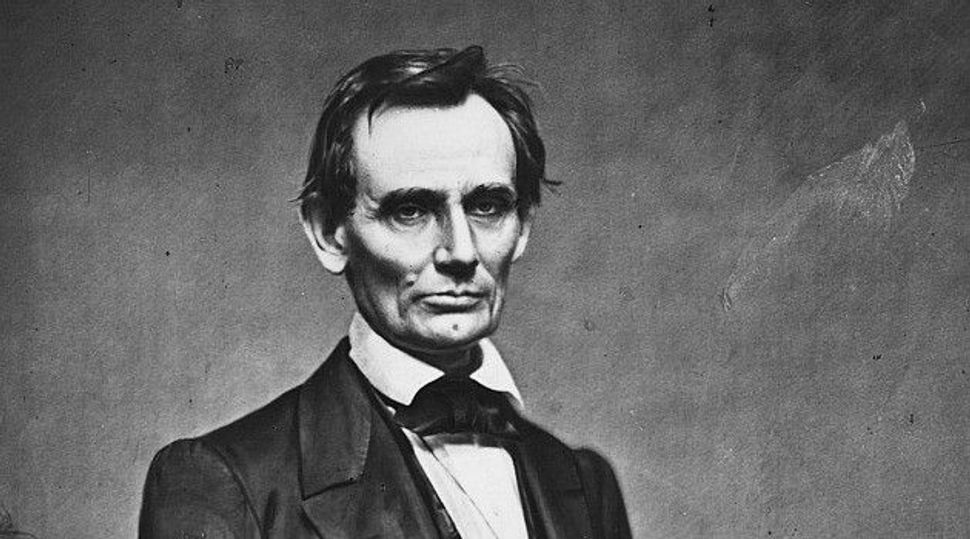 As far as we know, Abraham Lincoln never said, “Some of my best friends are Jewish.” But he certainly could have. Lincoln did chide his anti-Semitic Civil War generals and others who expressed the prejudices of the day. “I myself have a regard for the Jews,” he informed one visitor.

So Jonathan D. Sarna and Benjamin Shapell tell us in “Lincoln and the Jews,” an elegant illustrated volume that reveals little-known aspects of Lincoln’s personal history. The book doubles as a catalog for a traveling exhibition appearing at the New-York Historical Society from March 20 through June 7. Both the show and the book use photographs, letters and other items from the Shapell Manuscript Collection, as well as from other archives and museums.

Sarna, a professor of American Jewish history at Brandeis University, and Shapell, founder of the Shapell Manuscript Foundation, provide a chronological account of Lincoln’s relationship with Jews and Judaism that pauses periodically to detail specific friendships and accomplishments.

Within this basic storyline, the volume’s range is wide, at times idiosyncratically so. “Lincoln and the Jews” covers historical landmarks such as Lincoln’s appointment of the first Jewish military chaplain in 1862 and his revocation of Gen. Ulysses S. Grant’s infamous order that same year expelling “Jews as a class” from territory under his military control. (Grant had become “persuaded that all smugglers, speculators and traders were Jews,” Sarna and Shapell write.)

The book touches, too, on a series of glancing encounters: Jews Lincoln pardoned (and failed to pardon), Jews he appointed and promoted, Jews whose wares or services he purchased, even plays he saw with Jewish themes.

“Lincoln and the Jews” discusses the attitudes of Jews, including prominent rabbis, toward Lincoln, and how they improved in tandem with his presidential accomplishments, notably the successful prosecution of the Civil War. Finally, the book argues that Lincoln’s growing appreciation of Jews fostered increasing social tolerance, helping “to transform Jews from outsiders in America to insiders.” (That is a decidedly optimistic view of a process that arguably took another century or more to complete.)

Sarna and Shapell note that Lincoln probably knew no Jews during his childhood in Kentucky and Indiana. (The Jewish population in the United States grew from just 3,000 — mostly in East Coast cities — in 1809, when he was born, to more than 150,000 in 1865, when he died.) As a young man, however, Lincoln steeped himself in the Bible, and Old Testament ideas, cadences and language informed his rhetoric throughout his life.

Lincoln’s first great Jewish friend was Abraham Jonas, variously a Kentucky state legislator, Freemason, lawyer and the postmaster of Quincy, Illinois. Jonas was an early and important political supporter. “You are one of my most valued friends,” Lincoln wrote Jonas on February 4, 1860. According to Sarna and Shappell, Jonas played “an influential backstage role in the maneuverings that led to Lincoln’s [Republican presidential] nomination” later that year.

Another friend to whom the authors devote considerable space is a podiatrist named Issachar Zacharie. An anonymous ode published in the first incarnation of Vanity Fair magazine called him the “King of Chiropodists.”

“Something of a mystery man,” who obfuscated details of his biography, Zacharie treated such notables as Henry Clay, John C. Calhoun, the poet and editor William Cullen Bryant, Secretary of State William Seward, and Lincoln himself. In a September 22, 1862 testimonial, Lincoln wrote: “Dr. Zacharie has operated on my feet with great success, and considerable addition to my comfort.”

Zacharie was also an operator of another sort, adept at self-promotion. Although he failed in his attempt to create a “chiropody corps” for the Union Army, Lincoln extended him permission to accompany the Union Gen. Nathaniel P. Banks to Louisiana as a spy. Using other Jews as informants, Zacharie gathered intelligence on Confederate suppliers and troop movements. At one point, he even proposed negotiating an end to the war — a plan Lincoln rejected. Later, he would successfully plead the cases of Southern Jewish captives to his patron.

Over the course of the war, Sarna and Shapell report, Lincoln grew more aware of Jewish sensitivities, abandoning specific references to Christianity in favor of the more ecumenical formulation “this nation under God.”

The president emerges as an almost saintly figure, someone who preferred to pardon deserters and forgive enemy combatants. His ready admission of Jews into his inner circle is consistent with what we know of his character. “Lincoln turned a blind eye to stereotypes,” the authors write. It seems ironic that his assassin, John Wilkes Booth, was of Jewish descent, though he never identified as Jewish.

In their epilogue, Sarna and Shapell briefly raise the intriguing possibility that Lincoln, too, might have had some Jewish ancestry. They quote Rabbi Isaac Mayer Wise, a former critic, as saying that Lincoln “supposed himself to be a descendant of Hebrew parentage.” The authors, presumably unconvinced, don’t comment on Wise’s remark. But they seem to regard the claim as part of the “Jewish love affair with all things Lincoln” — a romance whose latest manifestation is this very book.

Some of Abe Lincoln’s Best Friends Were Jewish. Honestly.