Voices of Holocaust Survivors Resound in Words of Grandchildren 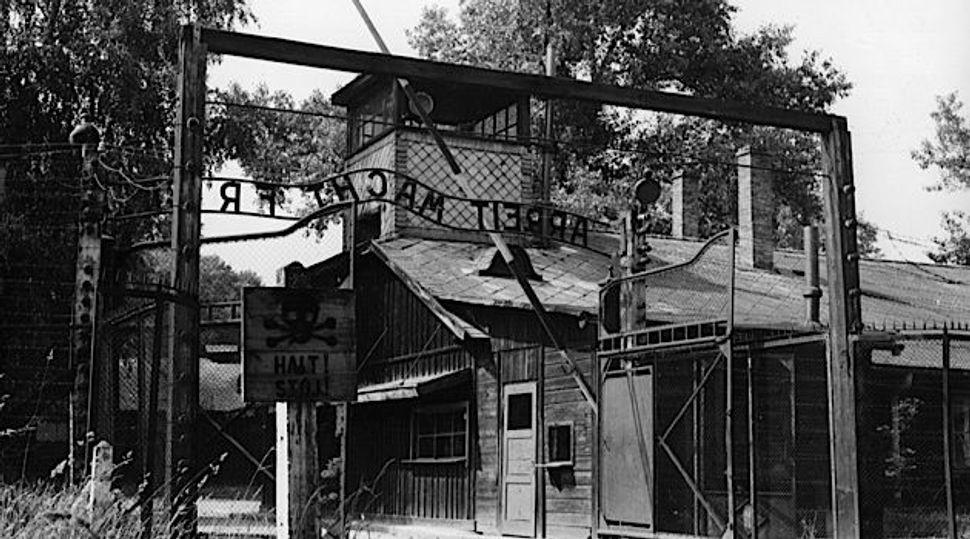 Back in Time: A 1955 view of the entrance gates to the barracks of Auschwitz. Image by Getty images

Israel prize winner and this generation’s most gifted Talmudist, David Weiss Halivni, who was born in Sighet, Romania, a year and a day before his friend and fellow sighter, Elie Wiesel, wistfully commented, “You know that Elie and I were not the most gifted of our class.” His playful insight kept coming back to me as I read the essays in “God, Faith & Identity From the Ashes.” Edited by Menachem Rosensaft, this work features short but powerful essays by some 88 contributors from 16 countries. Diverse as they may be, they have one experience in common: All are children or grandchildren of Holocaust survivors. The authors were chosen for their prominence as writers and artists, rabbis and cantors, political leaders and generals, lawyers and judges, and professors and scholars. They are a who’s who of their generation and they reflect the diverse, conflicting and often contradictory ways that the Holocaust has affected the succeeding generations.

The essays are divided into four sections: God, identity, the legacy of memory and tikkun olam, ordinarily translated as “repairing the world,” but here translated as “changing the world for the better.” The divisions, however necessary, are artificial, as many essays deal with all four. For most writers, they are inseparable.

Some of the essayists are rabbis of all denominations, committed to transmitting the traditions of the Jewish people and to creating the next generations of Jews, exemplifying Emil Fackenheim’s 614th commandment, “Thou shalt not give Hitler posthumous victories.” But as one reads their essays and peruses their biographies, one notices that there is an added dimension to their rabbinic service. Some are committed to bridge building among Jews.

American born Israeli Knesset member, Rabbi Dov Lipman first tried to establish some communication between zealous Haredim and their more moderate fellow Jews in Beit Shemesh. He ran for office as part of Yesh Atid, seemingly an anti-religious party. Hitler made no distinctions among Jews, nor would he. The post-denominational rabbi Moshe Waldocks highlights his interfaith work here, and a non-rabbi, writer Yossi Klein Halevi, explores the religiosity of his neighbors in Israel.

Some essayists are politicians, descendants of survivors who chose to serve their nations by enacting and preserving laws. Justice Rosalie Silberman Abella, a Supreme Court justice of Canada, writes that she seeks to provide a safe world for her children, something that her grandparents were unable to do their own. Several essayists are law professors, while others are social scientists, philosophers and ethicists, and many are in the healing professions, where children of survivors are overrepresented. Some contributors are social activists. The head of the International Rescue Committee, former MP the right honorable David Miliband, contributes to this work, as do the respective heads of the American Jewish Committee, the World Jewish Congress and the Jewish community of Lithuania.

Princeton University professor and controversial philosopher Peter Singer links the Holocaust with his atheism and his ethics. He writes that the Holocaust “gives us sufficient reason to reject the possibility of the existence of God or at least of a God worthy to our prayers, yet he remains committed — perhaps some would say overcommitted — to the prevention of unnecessary suffering even to the point of voluntary euthanasia.” Others have found God in the Holocaust. Rosensaft’s own essay on God asks why God’s presence should be presumed to be among the perpetrators and not among the victims and rescuers. For others, God’s presence is found in the ashes or in rebuilding from the ashes, or in the return to Zion. Harvard University professor Eric Nelson ducks a painful question: “For all my doubts, if my grandfather [a Holocaust survivor] could go on thanking God for the gift of dew, I should consider so as well.”

These children of survivors have built Holocaust museums in Russia and South Africa. These writers, who cherish the documents recording the Shoah and the world that preceded it, are preserving archives in Poland, Israel and the United States. They work with a sense of mission imposed by their past.

One might have expected a sense of melancholy to pervade this book. One might also have anticipated survivors descendants writing of a sense of inadequacy and guilt, the Holocaust as an unbearable burden and the responsibility imposed on children to make up to their parents the pain of their loss, frustration at the inability of a child to offer adequate consolation. Instead, one perceives a sense of empowerment, an appreciation of the privileges of freedom, the pride and blessing of being Jewish.

Filmmaker Jeanette Lerman-Neubauer writes: “My parents, two of the most positive people I have ever known. They used the trauma of their youth to forge lives full of meaning and purpose.” She is not alone.

Brandeis University professor Shulamit Reinharz writes of the positive narrative of her childhood; the miracle of her birth demonstrates the triumph of life in the aftermath of death. For many survivors, and seemingly so for these descendants, there is no lachrymose theory of Jewish history, but instead resilience, renewal, regeneration, Dare one say triumph?

“They had survived — were surviving — but they were not really alive. They were too vigilant, too scared and anxious to enter the unselfconsciousness and freedom necessary to experience playfulness and fun.

Those who had come back to life experienced eroticism as an antidote to death. They knew how to maintain a sense of aliveness in the face of adversity.”

In Israel, Aliza Olmert, the leftist wife of the former prime minister, writes of the legacy that she and her generational cohorts received as Zionist youth living in the independent state of Israel, itself a miracle of Jewish rebirth. Olmert’s generation included Avi Dichter, an Israeli general who later headed the Shin Beit in order to protect the security of Israel. Dichter now volunteers to provide resources to survivors, and demonstrates a fierce independence in his defense of Israel and his critiques of muddled thinking on security, often disturbing both the left and the right.

We know that survivors were but a small minority and not a random sample of the Jews who were victimized. The vast majority were murdered, yet given the magnitude of the contribution of these 88, one can imagine what was lost in the murder of their parents’ and grandparents’ generations of men and women who might have been born, raised and educated and gone out into the world to become creative and productive members of society. The world, not just the Jews, should mourn their loss.

It is an axiom of mathematics that the whole is no greater than the sum of its parts. Not so for literature, and especially not so for this work. These essays stand as the testament by two generations to the enduring and creative power of Holocaust memory — neither as a plea for the status of victim nor as a cry of vulnerability, but as a source of empowerment, moral courage and creativity, as a fountain of energy and compassion to build and rebuild the Jewish people and to better the world in which we live. It is counter-testimony to those who fear that the memory of the Holocaust bequeaths to Jews a vulnerability not our own, a sense of victimizations at odds with their achievements in the democratic societies in which we dwell.

Perhaps a century or two from now, if one wants to turn to one book that describes the impact of the Holocaust on succeeding generations, one would turn to this book.

Michael Berenbaum is director of the Sigi Ziering Institute and a Professor of Jewish Studies at American Jewish University. He is a contributing editor of the Forward.

Voices of Holocaust Survivors Resound in Words of Grandchildren