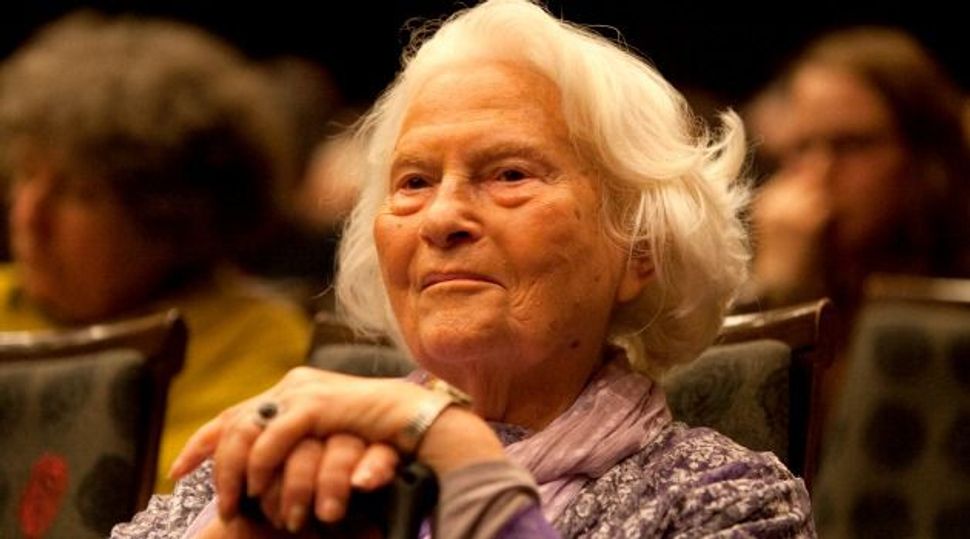 Lia van Leer, who died on March 13 at age 90, was a mighty pioneer who ensured that future generations in Israel will appreciate film as an art form. Founder of the Haifa Cinematheque, the Jerusalem Cinematheque, the Israel Film Archive and the Jerusalem Film Festival, she was born Lia Greenberg in the Russian-speaking Bessarabian city of Bălți, today in Moldova. Her father exported wheat while her mother was a volunteer for the Women’s International Zionist Organization (WIZO). Raised in an ardently cultural family, she named her pet cat Pushkin in honor of Russia’s national poet. In 1940, her parents sent her to stay with her sister who had made Aliyah four years before and was living in Tel Aviv. Her parents and grandparents would be murdered in Nazi concentration camps.

She first became entranced with cinema art when she saw Marcel Carné’s “Les enfants du Paradis (1945),” ironically enough a film made in Occupied France by a French collaborator with the Nazis. As she recalled in “Lia,” a 2011 documentary film: “I left the movie theater and couldn’t believe there was another world out there. I sat and didn’t want to talk to anyone else.” She did finally talk to Wim van Leer (1913–1992), a Dutch Jewish businessman based in Jerusalem, where she was studying at the Hebrew University. They formed an unorthodox household of Jewish movie lovers. Wim van Leer insisted on cooking his favorite Shabbat morning breakfast of bacon and eggs, alleging that his wife did not cook the bacon crispy enough. When she admitted to a local rabbi about her husband’s Saturday diet, he benevolently suggested that all people celebrate Shabbat in their own individual ways. Of the couple, the British author David Pryce-Jones, a family friend, noted in a blog:

“Lia was a gentle, soft-spoken woman, but she had a will of iron. She needed it. By any standards, Wim van Leer, the man she married and spent her life with, was a handful: an inventor, an industrialist, an adventurer, a pilot, extremely funny and extremely rude, in a word impossible.”

Their impossibly inventive adventuring included founding the first film club in Haifa in the 1950s with a membership of about 200, screening films every two weeks. As a projection venue, they used an empty aerobics classroom. She is quoted on the website of the Jerusalem Cinematheque about such early attempts to raise cinema consciousness: “There was hardly any film culture in Israel, and young Israelis simply weren’t interested. I suppose we had about 100 prints, which we’d bought from various film buffs, all in fairly poor condition.” These they projected in Jerusalem and Tel Aviv as well as distant kibbutzim and desert towns, traveling by jeep and crop-dusting plane.

In 1958, she managed to persuade the British Film Institute to send copies of their season’s films to Israel, which they did faithfully for three years, after which “someone at the BFI remembered that Israel was no longer part of the British Empire,” as van Leer told it. Not accepting defeat – her husband had fearlessly rescued 24 Jews from the clutches of the Nazis, as the official proclamation of the 2004 Israel Prize bestowed upon van Leer noted — they persevered. In 1961, she established a film archive of only around 100 films, but was so persuasive and enthused that she was accepted as a member by the International Federation of Film Archives, ensuring that Israel would receive further copies of films in future.

Today, the Israel Film Archive collects and preserves tens of thousands of Israeli and international films as the most important film archive in the Middle East. It owns over 30,000 screening prints, 20,000 video cassettes, and thousands of negatives of Israeli films. These include turn-of-the-century footage by the Lumière brothers of Jerusalem, Jaffa, and Bethlehem. The IFA’s Axelrod Newsreel Collection gathers some 450 newsreels of historical importance created by Nathan Axelrod from 1927 and 1958. There is also an in-depth collection of cinema advertisements once screened between feature films in Israel, of considerable sociological importance.

All this and more became possible due to van Leer’s energy and initiative. Even into old age she worked from 10am to midnight regularly at the Cinematheque. Her aim was to recreate what Paris and London already had, not just a place to show films but a museum, archive, library, classrooms, a cafeteria where diners kibitzed about movies, and other resources to promote film. Foreign embassies in Israel appreciated the opportunity to import films as a relatively economical form of cultural exchange, compared to transporting operas or other spectacles. Even when glittery stars of filmdom such as Jeanne Moreau, Lillian Gish, Marcello Mastroianni, Fanny Ardant, Claude Lelouch, and Wim Wenders made personal appearances at the Jerusalem Film Festival and at the Jerusalem Cinematheque, their visits could be handled within ever-pressing budgetary limits.

In a 2012 interview with Laure Adler on France Culture radio,, van Leer stressed that Arab filmmakers were also welcome in the facilities: “We have hosted all the Arab filmmakers here and given them awards for their films, even when the films were highly critical [of Israeli politics], because they were correct to say it is not easy to be an Arab in Israel, but perhaps one day that will change – but it isn’t easy for the moment.” Of the early days in Haifa and Jerusalem, she told Adler: “It was a good life. When there was a war, it was different, but the important things was that we won the war. It was very painful. Had the Arab countries accepted then that two countries existed, but they said no because they did not want a democratic country amidst all the Arab countries…We might have lived together in real friendship with all the Arabs who lived here. We had very good relationships, there were marriages between Arabs and Jews, a very friendly life…we might have lived very well next to one another. It’s the politicians, I think, not the people, who decide. Each time there is the possibility of having two countries, it doesn’t happen.”

For the past forty years ensconced in a house designed by Moshe Safdie in Jerusalem’s Yemin Moshe, van Leer welcomed a vast number of world cinema eminences to admire the artworks in her collection by Chagall and Picasso, drink tea, and discuss their shared passion for all things cinematic. In an interview with “Variety” last year, she remarked: “There is a lot of boycotting of Israel, including from filmmakers. I would like to tell them to come and see Israel as it is. Come – and give money to the Cinematheque.” When she died, Jerusalem Mayor Nir Barkat noted: “Only a person who realizes her dreams every day could be happy the way she was happy.”