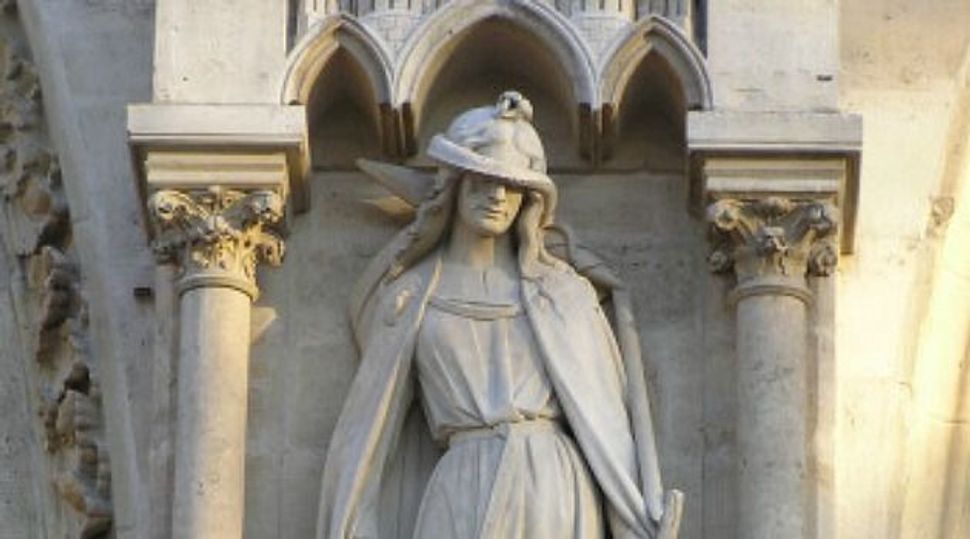 (JTA) — Notre Dame Cathedral in the heart of Paris is among the most visited sites on the planet and a splendid example of Gothic architecture.

Each year, millions flock to admire and photograph its flying buttresses and statuary, yet few take any real notice of two prominent female statues on either side of the main entrance. The one on the left is dressed in fine clothing and bathed in light, while the one on the right is disheveled, with a large snake draped over her eyes like a blindfold.

The statues, known as Ecclesia and Sinagoga, respectively, and generally found in juxtaposition, are a common motif in medieval art and represent the Christian theological concept known as supercessionism, whereby the Church is triumphant and the Synagogue defeated. Sinagoga is depicted here with head bowed, broken staff, the tablets of the law slipping from her hand and a fallen crown at her feet. Ecclesia stands upright with crowned head and carries a chalice and a staff adorned with the cross.

While the issue of what constitutes free speech and what crosses into incitement to violence was brought to the fore by the deadly January attack on the satirical French newspaper Charlie Hebdo, images mocking Jews and Judaism and encouraging anti-Semitic violence have been displayed throughout Europe since the early Middle Ages.

In a time when literacy was uncommon, these images were the political cartoons and posters of the age, and the ridicule and carnage they promoted was both routine and government sanctioned. What’s more, most remain visible if you know where to look. Below are some of the most common ones.

Wittenberg, Germany is famous as the place where Martin Luther nailed his 95 theses to the door of the Wittenberg castle’s church, and where the Protestant Reformation began, but the facade of its otherwise grand Stadtkirche, the church where Luther preached, features another medieval motif known as the Judensau (Jew’s sow). This particular Judensau (1305) shows Jews suckling at the sow’s teat while another feeds at the animal’s anus. Above it appears an inscription in Latin letters, “Rabini Shem hamphoras.”The phrase is gibberish, but refers to the Hebrew words “Shem HaMephorash,” a term for one of the hidden names of God.

The blood libel in Europe, a false allegation that Jews murder Christian children so they can use their blood to make matzah, probably originated in England with the murder of William of Norwich in 1144, followed by accusations in Gloucester (1168), Bury St. Edmonds (1181), Bristol (1183) and Lincoln (1255). It rapidly spread like a cancer to the continent.

Spain’s Toledo Cathedral has a fresco depicting the alleged ritual murder of Christopher of La Guardia near one of its exits — on one side a malevolent man is dragging away a child, while on the other the child is being crucified. At the 16th-century Palazzo Salvadori in Trento (Trent), Italy, which was built on the foundation of a synagogue, two plaques illustrating the supposed martyrdom of Simonino di Trento (Simon of Trent) at the hands of Jews in 1475 were affixed to the front portal in the 18th century.

Some of the supposed victims of ritual murder — William of Norwich, Little Saint Hugh of Lincoln, St. Christopher of La Guardia and Simon of Trent — were canonized, but the Church’s 1965 Second Vatican Council removed them from the canon, forbade worship of them, and absolved Jews of any guilt in such murders. Sadly, some Catholics still believe the libel and continue to celebrate the saints’ days.

There are thousands of Ecclesia/Sinagoga, Judensau and illustrations of blood libel on churches, in paintings, stained glass windows, wood carvings and in medieval manuscripts all over Europe. Meanwhile, the blood libel continues to have currency in places such as Belarus, the Arab world and, of course, on the Internet. Jesus of Prague (Toni L. Kamins)

This statue on Prague’s Charles Bridge combines a crucifix with lines from the Kedushah prayer and has a backward aleph. (Toni L. Kamins)

In Prague, the 15th-century Charles Bridge across the Vltava River connects Old Town to Prague Castle. Some 30 statues line its pedestrian-only walkway, but only one is likely to make Jews cringe – Jesus on the cross surrounded by the Hebrew words “kadosh, kadosh, kadosh, Adonai Tzva’ot” (holy, holy, holy is the Lord of hosts) from the Jewish prayer known as the Kedushah. The statue and inscription, whose origins are disputed, essentially appropriate Jewish liturgy to imply that Jews regard Jesus as God.

Elias Backoffen, a Jewish community leader, was forced to pay for the gold-plated letters as a punishment in 1696 either for an actual or trumped-up blasphemy that may have been at the hands of a rival Jewish businessman. Explanatory plaques in English, Czech and Hebrew were added in 2009 after the city’s mayor was petitioned by a group of North American rabbis.

Take a good look at the aleph in the word Tzva’ot – it’s backward. A secret signal to other Jews? No. The letter was removed by the Nazis during their occupation of Prague, and when the Czechs restored the letters after the war they made a mistake. And the vav in Adonai? It seems to have gone missing.