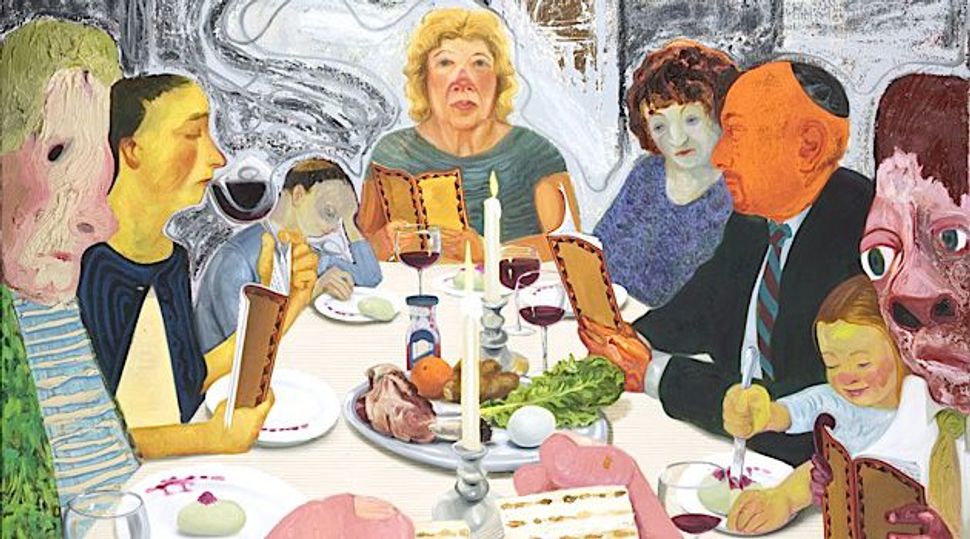 The first things I noticed when standing in front of Nicole Eisenman’s “Seder,” a painting commissioned by the Jewish Museum in 2010 depicting a family Passover gathering, were the hands. Garishly pink and fleshy, they rise from the lower edge of the canvas. They’re cartoonish, really, like something out of the work of Philip Guston, and painted in a style utterly unlike anything in the rest of the canvas — they busy themselves by breaking a matzo in half as a motley crew of guests around the table looks on, converses or retreats into silence.

Eisenman has said the hands are those of her father, sitting at the close end of the table; her mother sits impassively, maybe even expectantly, at the other end. But those hands are also the viewer’s hands — our hands — as we occupy her father’s chair. They are our invitation to enter the scene and take part in the ritual, to become part of the family.

“Seder” is the centerpiece of the latest in a series of “Masterpieces & Curiosities” shows organized by the Jewish Museum with the goal of exploring their collection and making connections between objects and histories that often go unnoticed. Joanna Montoya Robotham, the Neubauer Family Foundation assistant curator responsible for the exhibition, says that the goal of the series is to “pull together a story that would be a little bit unexpected — something that you wouldn’t necessarily see in a usual display of our permanent collection.”

Eisenman’s painting, which seems composed of layers of art historical references as thick as the layers of paint that cover the canvas, is an ideal starting point for such an exploration.

Among the figures gathered in the painting — each rendered in a radically different style and palette — are members of the artist’s family. There are imaginary figures, too, who take on monstrous forms touched with affection and humor, their massive heads out of scale with the other guests at the table.

But for all this strangeness, there is a comforting familiarity, too: the Haggadot the guests hold; the platter at the center of the table with sweet and bitter herbs, charoset, charred egg, lamb bone, horseradish, and orange; the glasses of red-purple wine; the plates with gefilte fish and maror, marked at the edges with dabs of red wine enumerating the plagues brought down on the pharaoh. 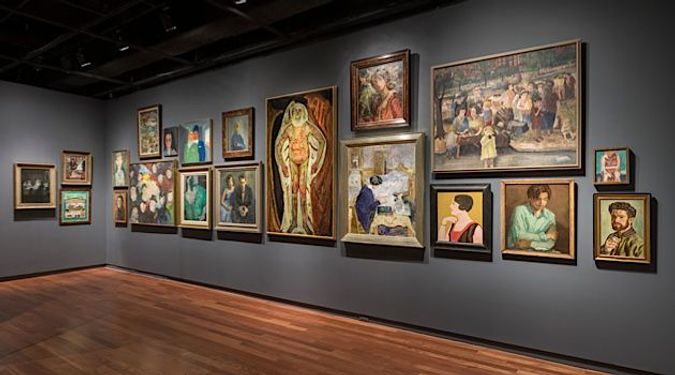 Image by courtesy of the jewish museum

Displayed on one wall of the gallery are objects that reiterate the ritual depicted in Eisenman’s painting, including an array of platters in porcelain and pewter intended to hold the symbolic foods central to the Passover meal. Some date from the early 18th century, others from the mid-19th, but the two at the center were made by Eisenman herself, commissioned by the museum for this exhibition.

One of these is hilariously literal — a pinkish glazed plate divided with unadorned lines into sections labeled for use: “cementy stuff” stands in for charoset, and “bitter herbs” are distinguished from “not so bitter herbs.” “Egg!” is the only item that rates an exclamation mark. The object is both irreverent and loving; it wouldn’t seem out of place in a Roz Chast cartoon.

Eisenman is known for her embrace of feminist and queer themes, and so it is fitting that among the Judaica on display are two cups for Miriam, feminist additions to the Passover tradition that started in the 1980s, highlighting women’s contributions to Jewish culture.

The silver cups in the exhibition — one by Amy Klein Reichert, the other by Michele Oka Doner — represent an expansion of the Passover tradition akin to the orange on the platter depicted in Eisenman’s painting. The tradition of including an orange on the Seder plate acknowledges gays, lesbians and other marginalized communities in the story of the Jewish people.

On the opposite wall of the gallery are paintings — mostly portraits — drawn from the museum’s sizeable collection and hung salon-style.

“Nicole is often looking at art history for inspiration,” Montoya says. “I just wanted to see what it would look like if I pulled these artists and pieces across various time periods and various styles to see how they would look alongside this contemporary painting.”

A number of the paintings on view, such as Moritz Daniel Oppenheim’s realist, moodily lit Seder (“The Passover Meal”) from circa 1867 and Meichel Pressman’s colorful, childlike painting on the same theme from 1950, share the subject of Eisenman’s canvas. Betty Esman’s image of a crowd at Ellis Island and Morris Shulman’s Tompkins Square Park, both from the 1930s, recall Eisenman’s fascination with social gatherings, both in “Seder Painting” and in her series of paintings of people gathering at beer gardens and in other spaces.

In some cases, portraits of single figures or couples — such as Hyman Bloom’s “Female Corpse (Front View)” from 1945 — invite comparison with the individual guests at Eisenman’s “Seder,” each rendered in a distinct painterly style. The tender expressionism of Theresa Bernstein’s “Self-Portrait” (1914), the art deco stylization of Stefan Hirch’s “Portrait of Aline Meyer Liebman” (1927), the emotional quietude (even melancholy) of Raphael Soyer’s “Seated Couple” (1954), the spackled, monumental, and abstracted figure of Mordechai Ardon’s “Girl No. 109336” (1950) — all these moods, palettes and painterly handlings seem to find purchase in one or another aspect of Eisenman’s canvas.

Even the matricidal violence of Leon Kossoff’s “Head of Mother” and the strange intensity of Avraham Ofek’s “Silent Conversation” seem to resonate, paradoxically perhaps, with Eisenman’s scene of family and conviviality. These paintings, among others in the exhibit, highlight a certain ambivalence, perhaps, or psychological complexity in Eisenman’s painting. We start to notice, in other words, the tension between figures and the silence that connects them.

One of the treasures here is a painting by Nicole Eisenman’s great-grandmother Esther Hammerman of a wedding party, made around 1950. The intensely colored work recalls Marc Chagall’s village scenes, save for one guest at the table who looks remarkably (and probably intentionally) like Frida Kahlo. This, along with another painting by Hammerman of a San Francisco cityscape, were lent by the Eisenman family and are the only two pieces in the show that are not part of the Jewish Museum collection. “They’re paintings that hung in her family’s home and that she was just surrounded by for her whole life and they really inspire her work,” says Montoya.

Eisenman’s intimate relationship to Hammerman’s work, as well as her engagement with the long history of Passover traditions represented by the objects on display, point to the complicated and rich relationship she holds with the past. “History can be both inspiring and something to push back against,” she said in a 2013 interview with the Yale Daily News. “[It’s] something to draw inspiration from and to resist. Not to resist in terms of not learning about it — obviously I’m interested in learning about art history and seeing everything — in the sense that young artists need to know about it so they can make an educated resistance against it.”

Aruna D’Souza is the editorial director at RiffleBooks.com