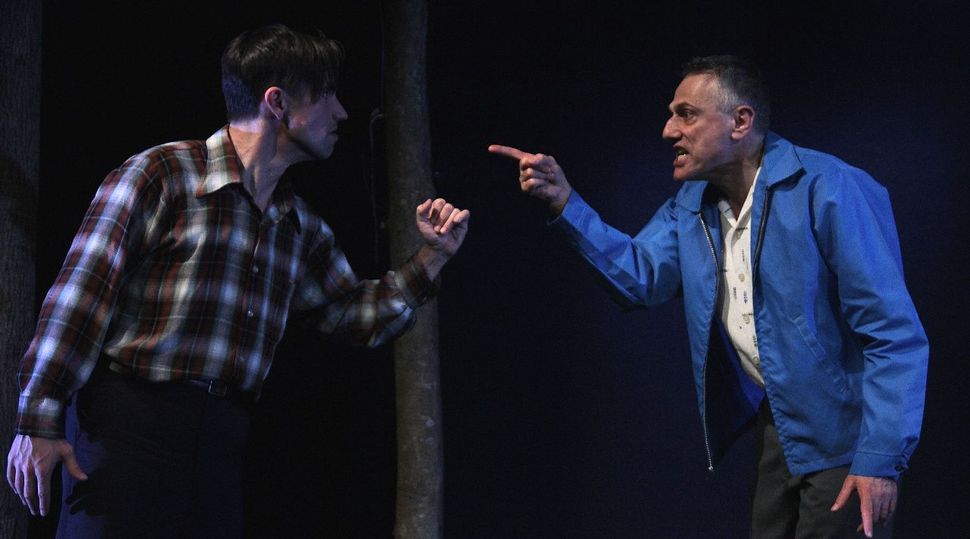 Making a Point: A scene from ‘I’m Looking for Helen Twelvetrees,’ by David Greenspan. Image by Jen Schriever

Over the course of decades, the writer, director and actor David Greenspan has built a body of work that downtown theater people consider with something close to awe while the general public has often been baffled. He’s won six Obie Awards over the course of his career, including one for sustained achievement, and been repeatedly lauded for the excellence of his work by organizations like the Drama League, the Outer Critics Circle and the Guggenheim Foundation. If the culturally astute average citizen recognizes him at all, though, it’s for his work in other people’s plays, most notably, his Obie winning performance in the 1996 production of Mart Crowley’s “The Boys in the Band.”

There’s a reason for this. Greenspan is hard to like.

He often seems not to care about being liked. Even at his most flamboyant, he’s a mercurial, reptilian performer, cerebral. There’s a gap between the thought and the action in his performances, a critical distance. Instead of entertaining the audience, he asks us to consider the imprecision and illusory nature of our attempt to connect with other human beings. When he strikes out with anger and violence, or exposes himself in a moment of tenderness, we are caught off guard. These emotions rise from a simultaneously more authentic and more calculated place than we’re accustomed to witnessing in the theater. However exposed he allows himself to be, his essential self, and the essential self of his character, remains unknowable, which makes his performances riveting, sometimes terrifying, and always challenging.

The same tensions between cerebral withholding and brutal emotional honesty exist in his writing. He does not allow the audience to enter and lose itself in his plays, rather, he demands that we engage on multiple levels — the cerebral and emotional, but also the historical, the literary, the theoretical — simultaneously.

His new play, “I’m Looking for Helen Twelvetrees” at the Abrons Arts Center is a fine example of what he does so well and why it can be so alienating.

The story proper is relatively simple. In 1951, a teenager named Mike makes a pilgrimage from his home in Los Angeles to Sea Cliff, Long Island, in search of the actress Helen Twelvetrees, a star of the early talkies. She’s acting in a summer stock production of “A Streetcar Named Desire,” and he wants to witness what he perceives as the profound beauty — let’s call it the human truth — that he sensed in a photo he once saw of her. He’s sensitive and a bit lonely. He feels he’ll discover something important, something numinous, a thing he needs, if he can meet her and learn about her life. Within this frame, we witness the tragic and brutal experiences that have led the actress from a girlhood as “Helen Jurgens from Brooklyn” to the glamour of Hollywood and back to the salt swept obscurity of Long Island summer stock. Most notably, we watch the development and disintegration of her first marriage to Clark Twelvetrees, a stagehand who aspires to be an actor/playwright but will only ever achieve alcoholism and a slow descent toward death.

It doesn’t take long for Greenspan and his director Leigh Silverman to make clear that however simple the story they mean to present, their telling of this tale will be anything but straightforward. Early on, we’re given to believe through innuendo and implication and a slippery blurring of the facts of Mike’s life with those of Greenspan’s own, that Mike is a proxy for the author himself, a tool by which he can enter and understand Helen’s story. He plays all the characters except Helen and Clark (Brooke Bloom and Keith Nobbs, both of whom bring an intensity and precision to their performances that allows them to hold their own against Greenspan). Watching him pivot from one role to the other, sometimes three or four within the same scene, changing his voice and posture to embody each character, the audience is made conscious of the written-ness of what we’re witnessing and the artificiality of the performance. The staging is stylized to such a degree that at times characters face in different directions, gazing off into the wings while they ostensibly carry out conversations with each other. Fight scenes are choreographed in such a way that the punches land six feet away from their target, who goes reeling anyway in delayed reaction.

What we learn of Helen Twelvetrees comes in fragments of scene and monologue. But we’re not allowed to luxuriate in the action. But this is no Douglas Sirk melodrama. It’s no Tennessee Williams gothic. Instead we watch as Greenspan reviews it, from angle after angle, sometimes rehashing the same scene with slightly (or greatly) altered details. Information comes to us in contradictory ways — dates change, names change, character motivations and basic facts of story change. Scenes we’ve already encountered play out in front of the audience for the second, third, fourth time, the Mike/Greenspan character observing along with us and sometimes entering, adjusting, rewriting the action as he fills the roles of the secondary and tertiary characters.

The central action of the play is not the story proper but the search for the story, the process by which Greenspan went about reconstructing and exploring the possibilities of Helen Twelvetrees’ life, circling toward a meaning that might not be there. We’re asked to contemplate along with Greenspan how Clark’s tragedy may have imprinted itself onto Helen and if there’s any connection between this and the “photos of [her] in this little long gone, long ago forgotten theatre,” that set Mike and Greenspan on their search for her.

This is a play composed of fractals, everything splintering and mirroring back, like a live action cubist painting. As it goes on, we return again and again to the pivotal moments in Helen and Clark’s lives: the night he seduced his roommate Steven and his proposal to Helen the very next day; the night he threw himself out the seventh story window of their apartment and survived; Helen’s abandonment of him for Hollywood, fame, and the second and third husbands that followed him; the drunken brawl that finally killed him; the way that, even after they separated from each other, their fates were inextricably linked.

As Mike/Greenspan tell Helen late in the play, “you did you looked haunted. And I wanted to think that despite all the chaos and disappointment, that in this neglected corner of time, you had done something of great beauty and anyone looking at these photos would know that.”

If he never quite finds a satisfactory answer to why and how this great beauty came to be, maybe it’s because the answer is unknowable. The search, and the confrontation with difficulty brought on by searching, may be as close as one person can come to another. Our souls remain hidden no matter how we yearn to expose them. Truth can only be gleaned in slippery fragments that squirm back into the sea at the slightest pressure. We live for those brief moments when it glimmers in our hands. David Greenspan knows this, which is why he’s hard to like, but also why he’s worthy of great admiration.