The Reformation of Morris Dickstein 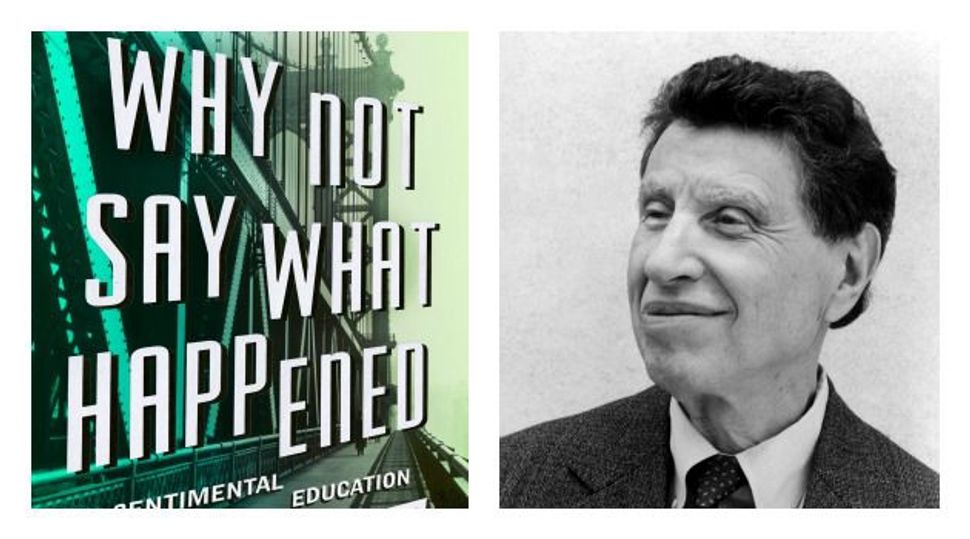 ● Why Not Say What Happened: A Sentimental Education
By Morris Dickstein
Liveright Publishing, 301 pages, $27.95

For more than 40 years, Morris Dickstein has been a dedicated, much-admired professor, scholar and author. He has achieved prominence and a wide audience for his astute essays of cultural criticism. In his first book, “The Gates of Eden,” Dickstein gave us a perceptive and sympathetic study of the tumultuous culture of the 1960s. More recently, he enriched readers with “Dancing in the Dark,” his personal take on the culture of the 1930s.

In “Why Not Say What Happened,” Dickstein turns his refreshingly honest, deeply intimate and provocative gaze on himself, tracing his intellectual and emotional journey from yeshiva bokher on Manhattan’s Lower East Side to distinguished professor at Columbia University. On the way, he treats us to vignettes that are poignant and illuminating — and humorous. For example, discussion of sex was taboo in his Orthodox religious household, and around women Dickstein felt uncomfortable, awkward, naive and completely without confidence. To the question of “What do women want?” Dickstein replied, “I found it hard to imagine myself as an answer.”

Dickstein also presents some humorous and revealing encounters with well-known figures in the world of letters, including the brilliant and acerbic writer, filmmaker and political activist Susan Sontag and the legendary “slash and burn” critic F.R. Leavis. Sharing a cab with Sontag on a return ride from a midtown conference, Dickstein made the mistake of reminding Sontag that he had first seen her 15 years earlier, when she was a teaching assistant and paper grader at Columbia. Sontag, already a star, retorted, “I was never anyone’s assistant,” and, “I never graded anyone’s papers.” Dickstein writes that he was shocked by her anger, but was even more stunned to hear “personal history revised in the presence of a living witness.”

Leavis, whom Dickstein had been reading since he was an undergraduate, had consistently devalued Charles Dickens as little more than an undisciplined entertainer; but by the time Dickstein interacted with him at Yale, Leavis had added Dickens to his very short list of “great” writers, never admitting that his views had changed radically.

Dickstein recalls many episodes — some amusing, some not — in his coming-of-age story. Several may surprise you — the length of time, for example, he spent as a young Torah reader on Henry Street, in the Catskills and at Rocky Point in Long Island, during many summers. But for readers even loosely familiar with the history and literature of the American Jewish experience, many of the anecdotes will be unremarkable, typical of the rise of sons of Jewish immigrants to positions and statuses well beyond those of their fathers.

Dickstein faces yet another problem, one inherent in memoirs written by intellectuals and academics. These efforts run the risk of drowning readers in a vast sea of unfamiliar names and titles. They also court the danger of turning off other scholars and teachers who find the memoirist’s experiences all too recognizable. Dickstein falls into both traps too often, but he still manages to provide a fascinating story combining the sentimental education of his subtitle (borrowed from Flaubert) and an intellectual development that goes through a number of changes and even epiphanies.

Something of a prodigy at the Henry Street Yeshiva on Manhattan’s Lower East Side, Dickstein continued to commute there even after his family moved to the Flushing section of Queens, where they opened up a small dry-goods shop. It seemed that his parents needed Dickstein to be more Jewish than they were, to make up for unavoidable transgressions such as keeping their business (which they increasingly detested) open on the Sabbath. They also wanted to keep a connection to the old neighborhood, which they had begun to romanticize almost as soon as they left it.

Admittedly ambitious and shamelessly vain, Dickstein took great delight, over many years, in being a star performer at his yeshiva. He also had a deeply ingrained need for the warm embrace of his “gaggle of demonstrative cousins” and other family members who shared with him a traditional Jewish life beyond yeshiva. But he was restive even before he went off to Columbia, yearning for more and richer learning than he was getting from the “punctilio of ritual” at the yeshiva, and from the “ludicrous” Orthodox “need to dot every i.” He was certain that college would provide a much more interesting and challenging education.

On his way to Columbia for his admission interview, Dickstein took the wrong train and had to traverse many blocks along 116th Street and through Morningside Park to get to the university. Years earlier, Alfred Kazin famously left the culturally constricted Brooklyn neighborhood of Brownsville to make the short but symbolically immense journey over the Brooklyn Bridge to the open world of Manhattan. Now, young Dickstein, forced to take a longer route to campus, was stirred to think about how great a social distance it was to uptown New York from Henry Street.

At Columbia, his teachers included Lionel Trilling, a giant of contemporary cultural criticism; Andrew Chiappe, the college’s leading expert on Shakespeare, and Fred Dupee, an eminent Henry James scholar and brilliant literary essayist. Dickstein’s readings were inordinately wide ranging and challenging, to the point of exasperation, but they provided him with grounding in the most important molders of Western secular thought and culture. He also read Nietzsche, Lawrence and Conrad, who allowed him a glimpse into the “abyss of moral horror.” He read Joyce, and was particularly affected by “A Portrait of the Artist as a Young Man,” a novel that came at just the right time for someone wrestling with religion, tradition, the taste of freedom and sexual yearning.

For Dickstein, this struggle would never really end, but it would eventually become a source of deep satisfaction. Modernity, he recognized, was full of dark places. Yet instead of despairing over the absurdity of life as a moral vacuum leading ineluctably to extinction, Dickstein experienced a sense of being uprooted from an older tradition and transplanted into a “tradition of the new.” Surrounded at Columbia by a secular New York in the exciting process of breaking the cultural bonds of the repressive 1950s, Dickstein heard the siren calls of Allen Ginsberg and Paul Goodman and ached to be free, to experience the Dionysian, even the apocalyptic.

But the not-so-distant past also beckoned. In addition to his work at Columbia, Dickstein, with no coaxing from home, took classes at the Jewish Theological Seminary and continued to keep kosher. At school, Dostoevsky, despite his fierce anti-Semitism, appealed to Dickstein, but he was more drawn to Freud and Kafka, “the most Jewish of the modern writers.” He took the name Marty for his first two years of college, but tellingly he was Morris again in the end.

Dickstein had long suffered from feelings of insecurity and vulnerability, partly the result of his Jewish immigrant mother’s desperate but not atypical fears for his physical health and safety. But in trying to exceed his already impressive intellectual accomplishments — to “learn everything,” to “ingest the world” and still stay steeped in both the modern and traditional worlds — he developed serious psychosomatic ailments and worries, even unto the fear of early death.

At Yale, Dickstein was drawn to Keats as a subject for his doctoral thesis. Like Dickstein, Keats had grandiose ambitions but also, like him, suffered grave doubts and fearsome dread. Partly through psychoanalysis, and with the encouragement and support of his multitalented and confident wife, Lore Dickstein (who is referred to throughout as “L”), Dickstein survived the oppressive sterility of Yale. And with help from the formidable Harold Bloom, with whom he shared an increasing dislike of the arcane jargon and “murk” of literary theory, he finished his work on Keats.

As an intellectual and a professor at Columbia during the cultural and political turbulence of the 1960s, Dickstein continued to demonstrate an abiding love for the study of literature in all its rich expressiveness, and an aversion to the formality and deadly discipline of theory disguised as scholarship. As if mirroring his literary experience, Dickstein, as husband, father and tempered self, continued to be warmed and informed by those Jewish rituals, ethics, words and music rooted in the “sub-soil” of his emotions. And finally he came to embrace, without fear and trembling, the idea that the formality and deadly rigidity of Orthodox Judaism was not the only way to be Jewish.

Gerald Sorin is a distinguished professor of American and Jewish studies and the director of the Louis and Mildred Resnick Institute for the Study of Modern Jewish Life at the State University of New York at New Paltz.

The Reformation of Morris Dickstein