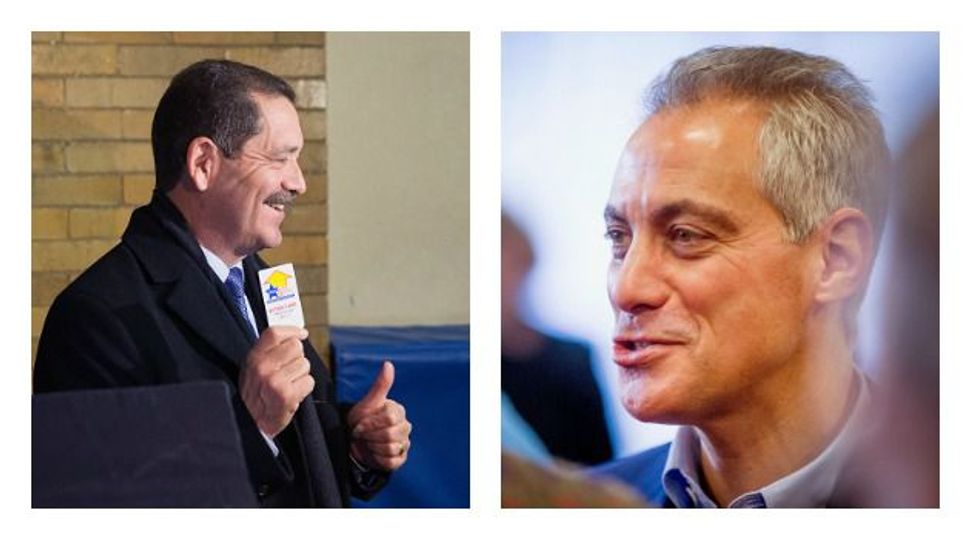 Chicago Mayor Rahm Emanuel is in a race to retain his job against Jesus “Chuy” Garcia, a career politician with strong ties to Chicago’s progressive community. And, the upcoming Chicago mayoral election being held on Tuesday, April 7, has been characterized by some as Jews for Jesus versus Jews for “Mayor 1 Percent.”

After ailing Chicago Teachers Union president Karen Lewis chose not to run, Garcia was drafted for the “anybody but Rahm” ticket and emerged as Emanuel’s challenger when the mayor couldn’t capture 50 percent of the vote against four other candidates February 24, forcing the April election. And this despite spending almost $7 million in television ads, half of what he raised for the first vote, and now at more than $30 million since 2011 for his total re-election effort. Garcia has raised about $4.6 million, mostly from teachers unions and the Service Employees International Union.

At their final debate, held on Tuesday, March 31, Emanuel pulled out the Jewish card by characterizing Garcia as “Hanukkah Harry” for offering a list of expensive proposals without explaining how he would find the necessary revenue. “Such a deal!” Emanuel blurted out. And the Chicago Reader has bolstered Emanuel’s Jewish street cred when it turned up a five-second appearance by the 18-year-old Emanuel protesting during a 1978 city-approved neo-Nazi rally captured in the short documentary “Marquette Park II,” by Tom Palazzolo and Mark Rance, about one of the city’s historically white ethnic neighborhoods.

For the city’s Jewish population the choice is not about being a Jewish voter but about whether Emanuel represents Jewish-style politics — despite his years as a congressman, and chief of staff to Presidents Bill Clinton and Barack Obama, respectively, with a two-and-a-half-year stint in between as an investment banker.

Even some Jews who support Emanuel say they simply don’t like him. One Jewish donor who has been a leading and decades-long contributor to local and national Democrats, including being among the first in the 1983 campaign to elect Harold Washington as Chicago’s first African-American mayor, told me that she doesn’t feel Emanuel “represents us very well.” Still, she adds, “Rahm can get the smartest people on Earth to help this city solve its problems. Don’t we want that?”

For other Jews that sounds patronizing. Marguerite Horberg has been politically and culturally active in Chicago for decades and is organizing throughout the city for Garcia. She sees Garcia’s candidacy squarely within her longtime Jewish political posture for “equal rights, women’s rights, and social justice. For progressives, ’Chuy’ is that candidate.”

This is the first contested mayoral election in Chicago in over two decades, since Mayor Richard M. Daley opted out after he generally defalcated the third largest city in America over 22 years partially through what has been characterized as reckless borrowing and privatization. Daley still enjoys a positive reputation — even after plunging Chicago’s debt rating, now at Baa2, only two places above “junk” status (the fifth drop during Emanuel’s term). Emanuel was a major fundraiser for Daley, though now they’re in a weird pas de deux as Emanuel often criticizes “the way things were done” before he became mayor without mentioning Daley by name. Daley has endorsed Emanuel.

One member of the Daley family, who has asked not to be named, remembers Emanuel’s well-honed profane hamishness: Not long after winning his first term and, seeing the horror of the city’s finances, telling this person at a sports event, “Please tell [Rich Daley]: ‘Thanks for leaving me a sh-t sandwich of an administration.’”

For his part, Garcia is solidly within the progressive/liberal community of people — many of them Jewish — who helped energize and fund the 1983 campaign of Harold Washington to defeat former state legislator Bernard Epton (also Jewish). As an alderman, Garcia worked with Washington and helped deliver votes for Washington’s policies.

The split between the city’s roughly 90,000 Jews can be viewed as a “progressive versus establishment Jewish family feud.” Among Emanuel’s supporters are several of the city’s most prominent Jewish families, including the Pritzkers and Crowns as well as others, incluing Emanuel compadre Michael Sacks of Grosvenor Capital Management.

Perhaps it might be more accurate to say it’s a J Street versus AIPAC situation. Garcia is supported by Progressives for Chuy — a collaboration by MoveOn, Daily Kos, Democracy for America, Progressive Change Campaign Committee, and Working Families, among others.

Emanuel’s campaign has also drawn money from Hollywood, courtesy of his younger brother, Ari, the co-C.E.O. of a dominant talent agency who is thusly described in Vanity Fair magazine: “Generally seen as the inspiration for Ari Gold, the crass, overbearing talent agent played by Jeremy Piven on the HBO series Entourage, Emanuel is known for in-your-face tactics that are extreme even by Hollywood standards.”

Plenty of Chicagoans will say the same of Rahm, who is short and fit and, in person, hardly looks intimidating.

With the most recent polling shows Emanuel with a 28 percent lead, 58 to 30 percent, maybe it’s more like David versus Goliath.

Ronald Litke is a Chicago-based writer and host of the weekly ‘Dialogue’ interview program on Rivet Radio.