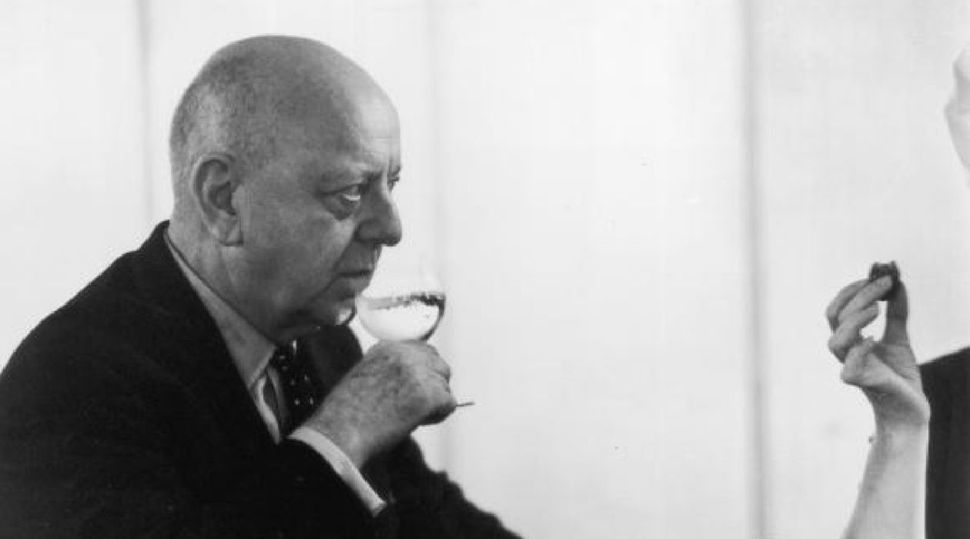 Questionable Taste: Virgil Thomson once derided the International League of Composers as the ‘League of Jewish Composers.’ Image by Getty Images

Kansas City, Missouri-born composer Virgil Thomson is called “America’s greatest composer-critic” in this collection, which addresses the issue of Thomson’s relationship with rival Jewish composers. Brought up in a Southern Baptist family in Missouri, Thomson produced some admirable works such as the zesty opera “The Mother of Us All,” written with Gertrude Stein about the social reformer Susan B. Anthony, but much of his pallid musical output has evaporated.

What remains is a critical persona à la Alexander Woollcott who could gush with sugary enthusiasm about friends and react like a snapping turtle to those he envied or disliked. In 1935, Thomson reviewed Gershwin’s “Porgy and Bess” by complaining about the “impurity of [Gershwin’s] musical sources and his frank acceptance of the same. The material is straight from the melting pot. At best it is a piquant but highly unsavory stirring-up together of Israel, Africa and the Gaelic Isles… I do not like fake folklore, nor bittersweet harmony, nor six-part choruses, nor fidgety accompaniments, nor gefilte fish orchestration.”

Thomson’s critique eerily echoed the anti-Semitic Dearborn Independent, Henry Ford’s newspaper, which warned that Gershwin’s “abandoned sensuousness of sliding notes” resulted in “Jewish jazz — moron music.” This was no isolated case of Thomson reacting with envy to a major work by a contemporary, says Stephen Whitfield’s “In Search of American Jewish Culture,” reminding us that Thomson constantly complained about a “Jewish Mafia that passed the jobs around among themselves.”

Thomson, who was employed as a music critic for several decades, was referring to jobs in media. Steven Watson’s “Prepare for Saints: Gertrude Stein, Virgil Thomson, and the Mainstreaming of American Modernism” concurs that starting in the 1930s at the latest, Thomson expressed bigoted views on Jewish composers. He derided the International League of Composers as the “League of Jewish Composers.” Watson explains that Thomson’s “residual bitterness” at being rarely performed at contemporary music concerts “lasted until his last years, when, at the slightest prompting, he would trot out his anti-Semitic theory that the Jewish mafia had excluded him.”

A pet peeve of Thomson’s was the American Jewish composer Aaron Copland, about whom he wrote in 1932, after Copland’s “Piano Variations” premiered: “Aaron Copland’s music is American in rhythm, Jewish in melody, eclectic in all the rest… Its emotional origin is seldom gay, rarely amorous, almost invariably religious. Occasionally excitation of a purely nervous and cerebral kind is the origin of a scherzo… [Copland] is a prophet calling out her sins to Israel. He is filled with the fear of God. His music is an evocation of the fury of God. His God is the god of battle, the Lord of Hosts, the jealous, the angry, the avenging god who rides upon the storm… The gentler movements of his music are more like an oriental contemplation of infinity than like any tender depiction of the gentler aspects of Jehovah… His melodic material is of a markedly Hebrew cast. Its tendency to return on itself is penitential.”

This tendentious view of peace-loving Christianity superseding bellicose Judaism patronizes Copland, whose compositions were superior in emotional resonance and impact to Thomson’s faded works. As Thomson concluded his peculiar backhanded appreciation, he described Copland as “an American certainly, a Hebrew certainly. But his more precise and personal outline is still blurred by the shadows of those who formed his youth.”

Howard Pollack’s “Aaron Copland: The Life and Work of an Uncommon Man” notes that Copland was aware of such statements and the attacks in Thomson’s “The State of Music” on a so-called International Modern Music Ring (consisting of a “Jewish conspiracy” or “Jewish mafia”). Copland likened Thomson’s notions to “Father Coughlin’s International Bankers,” referring to the virulently anti-Semitic Michigan Catholic priest whose 1930s radio broadcasts blamed Jews for any unfortunate world events. Yet the benevolent Copland maintained collegial feelings for Thomson. Thomson, in turn, admitted to the American Jewish composer David Diamond his jealousy of Copland’s success.

“[Stein] held certain Jews in attachment for their family-like warmth, though she felt no solidarity with Jewry. Tristan Tzara—French-language poet from Rumania, Dada pioneer, early surrealist, and battler for the Communist party—she said was ‘like a cousin.’ Miss Etta and Dr. Claribel Cone, picture buyers and friends from Baltimore days, she handled almost as if they were her sisters. The sculptors Jo Davidson and Jacques Lipschitz, the painter Man Ray she accepted as though they had a second cousin’s right to be part of her life. About men or goyim, even about her oldest man friend, Picasso, she could feel unsure; but a woman or a Jew she could size up quickly.”

Thomson’s statement expresses apparent jealousy about Stein’s other friends. Among these, some had little or no Jewish self-identification, such as Man Ray. Etta and Claribel Cone were old friends of Stein, and may have connected with her due to the fact that they were art collectors and fellow lesbians from Baltimore, rather than because of their Jewish background. Stein could feel “unsure” about Picasso not as one of the “goyim” but because he was Picasso. Thomson leaves unmentioned his own category of Stein’s friends, gay male aspirants to cultural achievement. Most of these were mediocre talents and Thomson may have resented being identified among them. By stating that Stein primarily cherished Jewish alliances, Thomson overlooked the fact that as Barbara Will’s “Unlikely Collaboration: Gertrude Stein, Bernard Faÿ, and the Vichy Dilemma” explains, Stein was an enthused admirer of Marshal Pétain, head of Vichy France where she lived, and was sheltered by her friend Bernard Faÿ, a Nazi collaborator.

Despite all this, Thomson felt a decades-long personal devotion to the American painter Maurice Grosser, described by Watson as a “non-practicing Jew from Huntsville, Alabama.” I well remember my own visit around 1981 to Thomson’s apartment in the Chelsea Hotel, which he moved into in the 1930s and where he remained until his death despite the increasing dilapidation of that establishment. I was there to discuss a Russian artist whom Thomson had known. The profoundly deaf composer indicated that I should fetch a folder of papers from the next room, which I did quickly. It was later explained to me that this was meant as a test for visitors, as works by Grosser decorated the walls and anyone who praised his art enthusiastically became a person of interest for Thomson. I failed the test because what little I had noticed of Grosser’s art in that instant seemed lumpy, placid and conventional. In “Visiting Gertrude and Alice,” a posthumously published article, Grosser recalled how Stein had once declared: “A Jew… is a ghetto surrounded by Christians. What we need this year are some new Christians.”

If Virgil Thomson was “America’s greatest composer-critic,” this year we need some new composer-critics. Copland, Elliott Carter, Lou Harrison, Henry Cowell and others were better composers, critics and human beings than Thomson. When will the Library of America honor them with volumes of their writings?