Anatomy of the Murderers 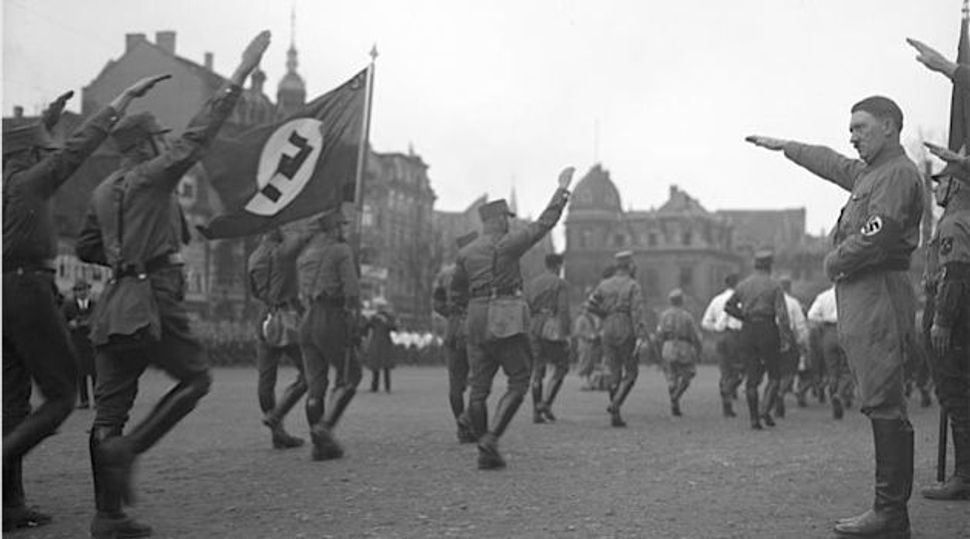 Early Supporters: Adolf Hitler attending a march of the Sturmabteilung, the paramilitary wing of the Nazi party, in 1932. Image by Wikimedia commons

However deranged his deeds, Adolf Hitler was not certifiably mad.

The German people did not voluntarily embrace the dictator, but acquiesced in his rule only after a campaign of terror that silenced or sidelined the political opposition.

And the Holocaust, compared to other 20th-century genocides, was unique in its global scope and ambition.

These are among the views that Richard J. Evans, the formidable Cambridge University historian, espouses in his lucid and informative essay collection, “The Third Reich in History and Memory.” Evans, best known for his three-volume study of the Nazi regime, originally wrote most of these pieces as book reviews; others appeared as journal articles. Apart from some repetition, the essays have aged well and provide a succinct overview of recent scholarly trends.

In his preface, Evans outlines these shifts in perspective: an attempt to situate Germany’s imperial aspirations and exclusionary ideology in a global context, a renewed emphasis on the extent of popular support for Hitler’s government, an examination of continuities between the Third Reich and Germany’s postwar democratic regime, and an interest in the relationship between history and memory.

The issue of domestic support for Nazism remains highly contested. It bears on both the thorny notion of collective guilt and on specific legal culpability for Germany’s crimes. And it helps explain the country’s generational lag in confronting the Holocaust.

Following World War II, Evans notes, the historical consensus was that the Third Reich was a police state with Hitler firmly in charge. Many Germans portrayed themselves as victims of the Nazis (not to mention Allied bombs and the brutal Soviet invasion). Later research complicated the picture. It uncovered the complexities of the Nazi bureaucracy, with its internecine rivalries, and suggested that there was space to resist the regime. Why then was resistance so minimal, at once so short-lived and so slow (as the war effort faltered) to re-materialize?

Some historians credit Hitler’s popularity. They believe, as Evans puts it, that the regime “rested not on police terror and coercion but on popular approval and consent.” The German historian Götz Aly, for example, has famously argued that social mobility and economic benefits — derived from the plunder of Jewish property and conquered countries — helped bolster Hitler’s support.

Evans is skeptical. “Nazi Germany actually was a dictatorship in which civil rights and freedoms were suppressed and opponents of the regime were not tolerated,” he writes. In “Berlin in the Twenties,” a dismissive review of Thomas Friedrich’s book “Hitler’s Berlin,” Evans writes that “mass violence underpinned the Nazi seizure of power at every level.”

In “Coercion and Consent,” he reminds us that the Nazis initially targeted not just Communists but also Social Democrats — the chief representatives of Germany’s working classes and, together, a powerful electoral force. “These people were hardly members of a despised minority of social outcasts,” he writes.

He notes, too, that the Gestapo and the concentration camps were only part of the apparatus of repression. The regular courts and state prisons played a role, along with job loss, eviction and harassment, as well as widespread indoctrination, effective particularly with younger Germans.

Though Evans makes a credible case, he doesn’t entirely demolish his opponents’ arguments. While the results of plebiscites were clearly unreliable, it seems incontestable that many Germans, by the mid-1930s, supported Hitler and his belligerent expansionism and (at the least) tolerated his violent persecution of the Jews and other groups. Even Evans admits that “the number of people who were willing to some degree or other to play a role in the coercive apparatus of the regime must have run into several millions.”

On the perhaps equally vexed question of Hitler’s personality, sanity and overall health, Evans coolly parses the evidence. In “Was Hitler Ill?,” a review of a 2013 book by Hans-Joachim Neumann and Henrik Eberle, he seconds the authors’ conclusion “that… he was no more ill than most other people are at some time or other during their lifetime.” He agrees, too, that Hitler “certainly was not mentally ill, not at least in any sense known to medicine or psychiatry.” He fails to tackle the question of whether Hitler was a sociopath or suffered from some other severe personality disorder, emphasizing instead that “he was sane according to any reasonable definition of the term, and fully responsible for his actions.”

In the same vein, his essay on Heike Görtemaker’s 2011 biography “Eva Braun: Life with Hitler,” argues, in concert with the author, that the relationship between Eva Braun and Hitler was “a normal expression of heterosexuality on both sides.” It took two failed suicide attempts for Braun to consolidate her hold on her man — tactical successes, Evans says. (Evidence of emotional instability, one might argue instead.)

Over time, Evans writes, Braun became increasingly assertive in the relationship, subverting the Nazi ideal of passive womanhood. Görtemaker’s biography’s depiction of the romance is “deeply troubling,” he suggests, because of its very normalcy. “For if a man like Hitler was capable of ordinary human love for another person,” he asks rhetorically, “then what power does love possess?”

On the (even more) emotional subject of genocide, Evans asserts the historian’s right to introduce analytic distinctions. He reviews the murderous invasions of Poland by both Nazi Germany and the Soviet Union, the anti-Semitic actions of Croatia and Romania, the Nazi killing of Gypsies and the handicapped and mentally ill, the early 20th-century extermination by Germans of the Herero tribe in southwest Africa, the 1930s Ukrainian famine, and the Armenian and Rwandan genocides — a depressing catalogue of human iniquity. But he finds that an “obsessiveness” and “desire to be comprehensive and make no exceptions, anywhere, is a major factor distinguishing the Nazis’ racial war from all other racial wars in history.” He adds: “Unlike all the others it was bounded neither by space nor by time.”

It is possible to argue with Evans’s conclusions. But as he threads his way through historiographical battles, assessing the merits of warring schools of thought, Evans emerges as a fair-minded and precise interpreter — a useful guide if not necessarily a final arbiter.

Anatomy of the Murderers