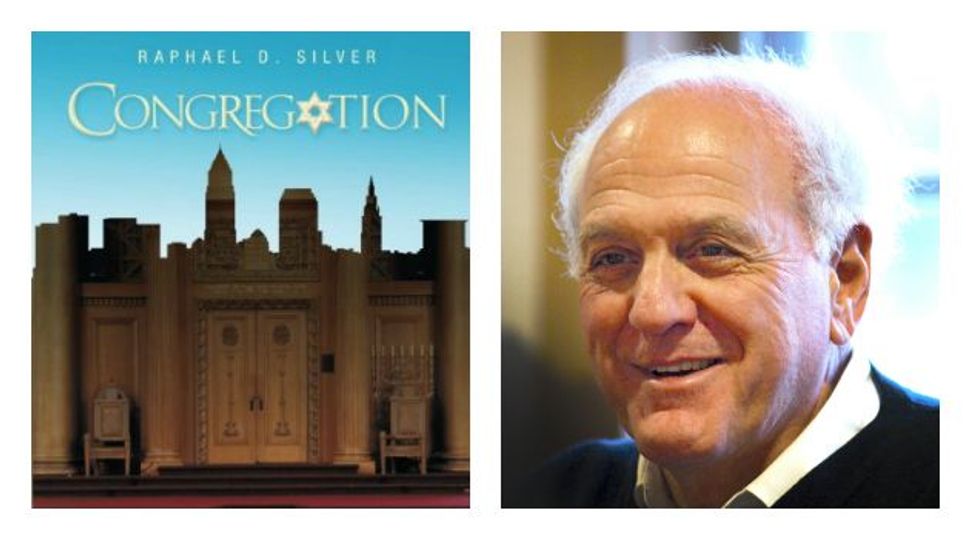 The Fighting Congregation: In his posthumously published novel, Raphael Silver (right), who died in 2013, chronicles the power struggle in a Cleveland Reform temple. Image by courtesy of Joan Micklin Silver

Over the course of his 83 years, Raphael Silver was many things: real estate developer; film producer, director, writer and distributor; climber of Mount Kilimanjaro at age 73; indefatigable collector of objects; and finally, at the end of his life, author of a novel, “Congregation.” Silver knew the subject of congregational life with an intimacy shared by few who are not themselves in the rabbinate — he was born to the family of one of the most prominent rabbis in America at the time, Rabbi Abba Hillel Silver of The Temple in Cleveland. Raphael Silver’s older brother Daniel Silver succeeded his father at that pulpit.

In his posthumously published novel, Raphael Silver, who died in 2013 after a ski accident, details the power struggle that ensues when the respected and prominent senior rabbi of a Reform temple in Cleveland announces from the pulpit on Rosh Hashanah that he is suffering from ALS. The junior rabbi, though lacking the gravity and experience that would make him an appropriate replacement, is vying for the job. He calls attention to himself by writing a letter to the editor of a newspaper about high ticket prices in major league baseball that make it difficult for the average person to attend. The triviality of the issue that brings him to national prominence is contrasted with the civil rights work performed by the senior rabbi. Raphael Silver’s father, Abba Hillel Silver, spoke before the UN in 1947 about the partition plan for Palestine and met several times with former President Harry S. Truman at the White House to convince him to accept the declaration of the new state of Israel.

Raphael Silver collaborated with his wife Joan Micklin Silver on a number of successful movies, among them “Hester Street,” “Crossing Delancey,” and “A Fish in the Bathtub.” She says that her husband’s book resulted from his “great desire to try things” and his “great curiosity,” adding that she herself benefited greatly from these qualities of her husband. When she was in despair at not finding a distributor for her now-classic film of the immigrant experience, “Hester Street,” based on a novella by Forward founder Abraham Cahan, he entered it into the Cannes Film Festival and called filmmaker John Cassavetes for advice. Cassavetes told Silver he should distribute it himself. “He wasn’t afraid to fail,” Micklin Silver says of her husband.

Since her husband died, Micklin Silver says she hasn’t wanted to go back to directing, since it was something they did together. “I will not say ‘won’t’ but I haven’t yet,” she said. The project she would be most interested in working on would be an adaptation of the novel “Congregation.” “If the opportunity came along, I would love to help work on it,” she says.

In her most recent contribution to the Forward, Beth Kissileff profiled author Ruby Namdar.