Heard the One About the Jewish Musical That’s Better Than You’d Think? 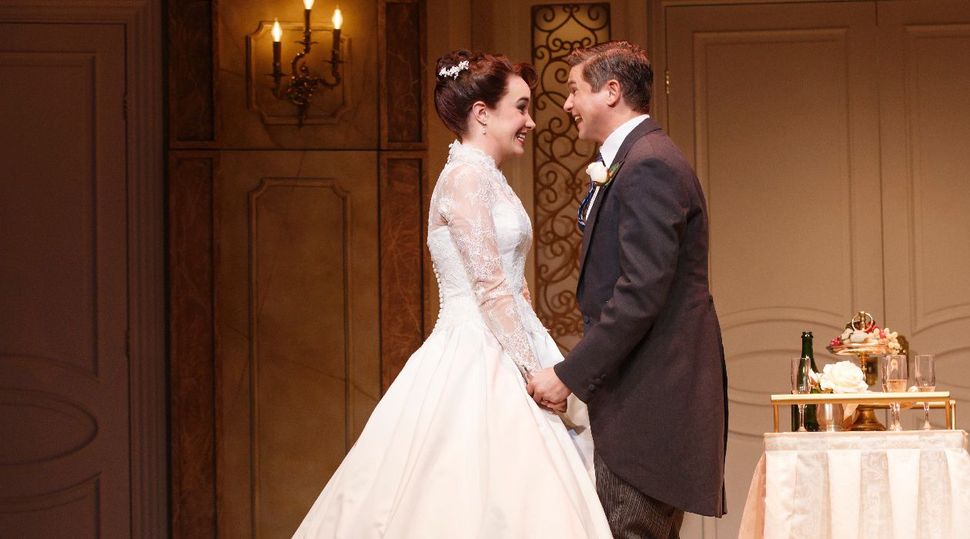 Shoulda Been There: Sierra Boggess and David Burka in the new musical, ‘It Shoulda Been You.’ Image by Joan Marcus

Have you heard the one about the Jewish mother so bulldozing that her husband and daughters try hard to stay out of her path? About the Jewish father proud at his daughter’s wedding, but mostly because of the great deal he got on the banquet hall? About the Waspy machetayneste-to-be who sips gin at breakfast, the gay wedding planner who has a solution — and a snarky aside — for every problem? The goyishe groom who tries to use some Yiddish but can’t get any of it right?

For the first hour of its 100-minute running time, “It Shoulda Been You,” the new Jewish-bride-marries-gentile-groom musical that opened on Broadway last night at the Brooks Atkinson Theatre, is a stream of such clichés, an unoriginal but genial culture-clash romp that seems an ideal candidate for the Westside Theatre (the off-Broadway home of such synagogue-outing hits as “Love, Loss, and What I Wore,” “Becoming Dr. Ruth” and “Old Jews Telling Jokes”).

But when the groom finally steps on the glass, and you wonder how playwright Brian Hargrove will fill another 40 minutes, the script takes an unexpected and interesting twist. (I’m going to try not to spoil it.) Hidden within this pleasantly predictable show, it turns out, is a smarter and more interesting one. It doesn’t quite succeed — even this fresher material is flawed — but the second half of the show, like the panini station that becomes an (overplayed) running joke, adds something filling between the white bread.

This is Hargrove’s first play; the setup-punchline cadence of his writing honors his long career in TV. Barbara Anselmi, also in her Broadway debut, is credited with music and concept, the former jaunty but unmemorable and the latter about the same. (There are also five “additional lyrics” writers.) What makes the play work as a well as it does is the wattage of its interpretive team. The star of the evening may well be David Hyde Pierce, who is also making his debut as a Broadway director, shepherding a script written by his husband. Pierce is, of course, an able veteran performer with broad experience in both musical comedy and sitcom, and his sure hand gives shape and snap to this sitcom-esque musical comedy.

He’s also got a fantastic cast. Tyne Daly and Harriet Harris are the dueling mothers, and they could save any show. They’re only helped further by Chip Zien as Daly’s henpecked husband, who brings some sweet sensitivity to the proceedings; Edward Hibbert as the typically, drolly Hibbertian wedding planner; and the grounded performances from the two Steinberg daughters: Sierra Boggess as the bride, and Lisa Howard as her responsible, single sister. David Burtka, best known as Neal Patrick Harris’s better half, is a charming and fleet-footed groom.

Guided by Pierce, all the actors are sharp with the occasionally farce-like comedy (the set, by Anna Louizos, is stocked with more doors than a Home Depot). But the high points, in many cases, are the musical numbers. There’s a bang-up series of solos in the early part of the play that make you realize even this duller material is being performed by pros: Daly’s “Nice,” an ode to the virtues of saying what you think, Hibbert’s “Albert’s Turn,” a wedding planner’s anthem of resourcefulness, and Harris’s “Where Did I Go Wrong?,” on her decades-long effort to keep her son from loving any woman more than her. There’s a nice softshoe as Waspy father and son, for the first time ever, express emotion. And both Steinberg sisters have moving, beautifully sung late-in-the-show ballads.

It is Boggess’s number, “A Little Bit Less Than,” which best points out what’s both good and bad about the play. It’s a sweet and moving song, about self-acceptance and self-assertion and coming out of the closet — OK, I’m giving away a bit of the surprise twist — that Boggess delivers with tender power. It’s also placed, ridiculously, in the mouth of a woman who’s just married a man because, until that moment, she couldn’t face her mother with the truth.

But, then, “It Shoulda Been You” is a show that rewards most those who think about it least. It’s stale and silly and more than a little nonsensical; it’s also fun and funny and, almost in spite itself, somewhat smart. The audience its producers surely have in mind — that great mass of theatergoers in Syosset and Scarsdale and Short Hills — will eat it up. It coulda been a lot worse.

Heard the One About the Jewish Musical That’s Better Than You’d Think?