The Road to David Brooks’ Character 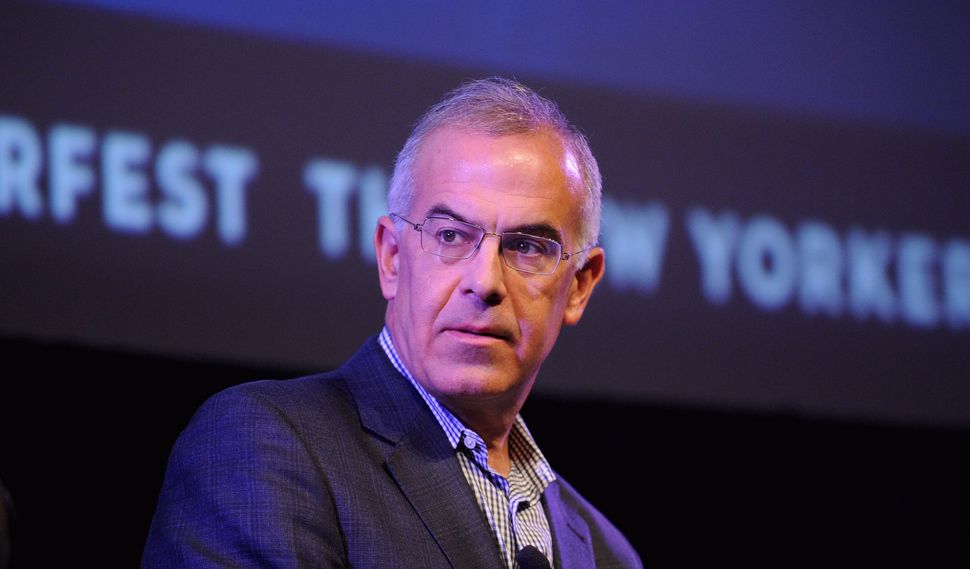 Man of Faith: Brooks acknowledges his position as a Jewish thought leader. Image by Getty Images

David Brooks is nothing if not solicitous. After changing the time and location of our scheduled meeting with just an hour’s notice, he was plainly grateful that I was able to show up on time. When we met in the gleaming lobby of the New York Times building in midtown Manhattan, quiet at an early hour, he ushered me to an upstairs corner conference room where he had laid out a large coffee and a toasted bagel for each of us.

It was a kind gesture, and I, still exhausted from a weekend of Seders, nearly lunged at the coffee. But, um, the bagel? It’s Passover, I told him. So sorry. I’m not eating bread this week.

If a famous and powerful newspaper columnist — he had to move up our meeting to attend a briefing at the White House — could act like a mortified teenager, it was David Brooks that morning. Despite telling him that I didn’t mind if he ate his bagel while I scribbled my notes, he scooped up both of them and then raced to deposit the forbidden food in a wastebasket at the other end of the room, apologizing profusely.

I learned two things from this episode: Brooks’s kindness appears genuine. He didn’t blame an aide or a handler for messing up. He owned it.

And second, despite the fact that he’s the Jewish conservative whom even some liberals love to read, who proudly sent his three children to day school and has a son serving in the Israeli military, who writes about religious thought and faith traditions so approvingly, he seems at odds with contemporary Jewish life. It’s not just his choice of breakfast that morning that leads me to this conclusion; it’s that his politics are more old-fashioned Republican than those of most American Jews, and the starchy criticisms of modern culture woven through his columns for The Times can feel almost WASPy. His new book, called “The Road to Character,” [and the reason for our conversation] is laced with themes that focus very much on the individual inner life and not on communal responsibility, which to me seems to hang more on the Christian side of the Judeo-Christian ethos he so admires.

Does he consider himself a Jewish thought leader? “I guess so,” he replied, but then stated, “I keep my own faith private.”

His aim is to express religious themes in secular language. His latest work is part meditation on the inner life, part breezy biographies of the men and women whose personal struggles and striving forged their characters in ways that Brooks believes ought to teach and inspire us today. He clearly adores these historical figures. “I travel with my little posse of the dead,” he said.

He opens with a critique of contemporary culture set in a framework devised in 1965 by Rabbi Joseph Soloveitchik, who argued that we all have two opposing sides of our nature; he called them Adam 1 and Adam 2. Brooks nicely turns the concept into a modern sound bite: Adam 1 is the career-oriented, ambitious side of our nature; Adam 2 wants to embody certain moral qualities. Adam 1 is about the résumé; Adam 2 is about your eulogy.

Brooks acknowledges that we live in contradiction between these two natures, since to build a résumé you cultivate your strengths, while to build a moral core you must confront your weaknesses. But he doesn’t call for balance. Instead, he makes a persuasive argument that we live in a time that rewards the striving, utilitarian Adam 1 while ignoring and even demeaning those who seek the moral clarity and sturdy inner life associated with Adam 2.

“This book is about Adam 2,” he writes. “It’s about how some people have cultivated strong character. It’s about one mindset that people through the centuries have adopted to put iron in their core and to cultivate a wise heart. I wrote it to save my soul.” 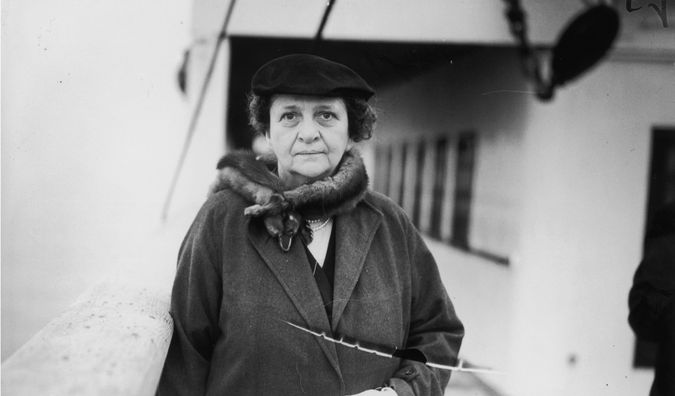 Profile in Courage: Frances Perkins is one of the role models cited by David Brooks in his new book. Image by Getty Images

As he spoke about his work that morning, Brooks didn’t look like a person whose soul needed saving. He appeared just as you would expect: At 53 years old, he has hair that is thin and gray; his dress is casually professorial, his voice reasonable and recognizable from all the broadcast appearances he’s done ever since, as a young journalist, he carved out a niche as an intellectual conservative pundit. He admires modesty, and tries to show it, but his ideas and the way he expresses them sound lofty and sometimes unreachable. When he writes that the “most important thing is whether you are willing to engage in moral struggle against yourself,” I’m not sure how to take that abstract admonition and make it a daily practice.

The profiles do help concretize this idea. (Devoted readers of Brooks’s column will recognize some of the names.) There’s a chapter on Frances Perkins, who witnessed the horrific 1911 fire at the Triangle Shirtwaist Company on Manhattan’s Lower East Side and committed herself to a life of government service, becoming the first woman to serve in the Cabinet while navigating a difficult personal life and episodes of public shame. And a chapter on Samuel Johnson, who rose from a disfigured youth in 18th-century England to turn his handicaps and limitations into advantages through sheer hard work, becoming a universally admired thinker. Dwight Eisenhower. Dorothy Day. Augustine. Montaigne. Bayard Rustin. Philip Randolph. George C. Marshall. George Eliot. All get the Brooks treatment, their inner struggles dissected through their writings and actions, each to make a distinct point on how to navigate the road to character.

I asked Brooks why there were no Jewish heroes in the book, and he said that an earlier version included a chapter on Moses. “He was the meekest man on earth and yet called to lead,” Brooks told me. “He was humble enough to try to get out of it. That basic humility, the wrestling — the Greeks and Romans didn’t know what to do with Moses’ style of leadership.”

But Moses ended up on the cutting room floor because the great biblical prophet didn’t leave a trove of personal writings the way other characters did. “I needed access to his inner life,” was Brooks’s rationale. (The Greeks and Romans were excluded for the same reason.)

Humility — Brooks said that was also a contender for the book’s title — is what he most admires in leadership and what he finds almost universally missing today. President Obama is a man of “good character,” not greedy or scandalous, “but I would not call him humble. He’s probably the most self-confident person I’ve ever met.” Humility is also missing in Israeli Prime Minister Benjamin Netanyahu, who must be “the center of the room. I don’t think he has wrestled with his own weaknesses. He has trouble keeping those close to him. [George C] Marshall was a hero to those who knew him well. Not true for Bibi.”

To be fair, there is little space for humility in today’s politics, or in our larger cultural, technological, meritocratic environment — “the age of the selfie,” as Brooks calls it, where moral relativism rules and quiet virtues get you nowhere on Twitter. Even if Brooks’s call to resist the prevailing winds of this selfish, materialistic culture sounds old-fashioned, I still find it deeply compelling. We live in an America that seems to worship narcissism and reward self-aggrandizement, a nation that is, in his words, “morally inarticulate.”

But is that solely due to something absent in our individual characters? Is it because we haven’t struggled enough and confronted our weaknesses, as his “posse of the dead” has done? It’s not until page 220 in “The Road to Character” that Brooks acknowledges a broader context. “Much of our character talk today is individualistic, like all our talk, but character is formed in community,” he writes. And that crucial observation is then left unexplored. This is where — for this reader, anyhow — his thesis suffers from the same critique he lodges against contemporary society: It’s all about me. Character is forged by the inner journey and shaped by family and other primary influences, but larger forces play a role here, too. Our worship of materialism and self-satisfaction isn’t just a personal character flaw; it’s embedded in our tax structure, public spending priorities and national policies. The lack of empathy that Brooks decries is reinforced by politicians who disdain government and any sort of public sacrifice. I’d even go so far as to say that the prevailing tropes in many religious denominations, by emphasizing personal growth and satisfaction and de-emphasizing communal responsibility, have contributed to legitimizing “me” over “we.”

The omission of the larger socio-economic forces risks making Brooks’s argument seem elitist. Isn’t there more opportunity to confront your personal sins and shortcomings if you aren’t worried about losing your job, your health benefits and your ability to keep your family safe? The imperative to place yourself in community is, in my opinion, fundamental to Jewish teaching and practice, and offers a stunning counter-cultural antidote to society’s ills, but it doesn’t seem to resonate with Brooks’s worldview. He’s entitled, of course, to write more about sin and grace than about what we owe each other. “I conceived of this book as looking beyond the reach of government, to the things that really matter in our lives,” he told me. I applaud him for that. But if he’s correct that in 21st-century America, “morality has been replaced by utility,” then repaving the road to character will take more than individual effort. It also deserves to be developed and reinforced by a collective will.

Jane Eisner is the editor in chief of the Forward. Contact her at [email protected] or on Twitter, @Jane_Eisner

The Road to David Brooks’ Character