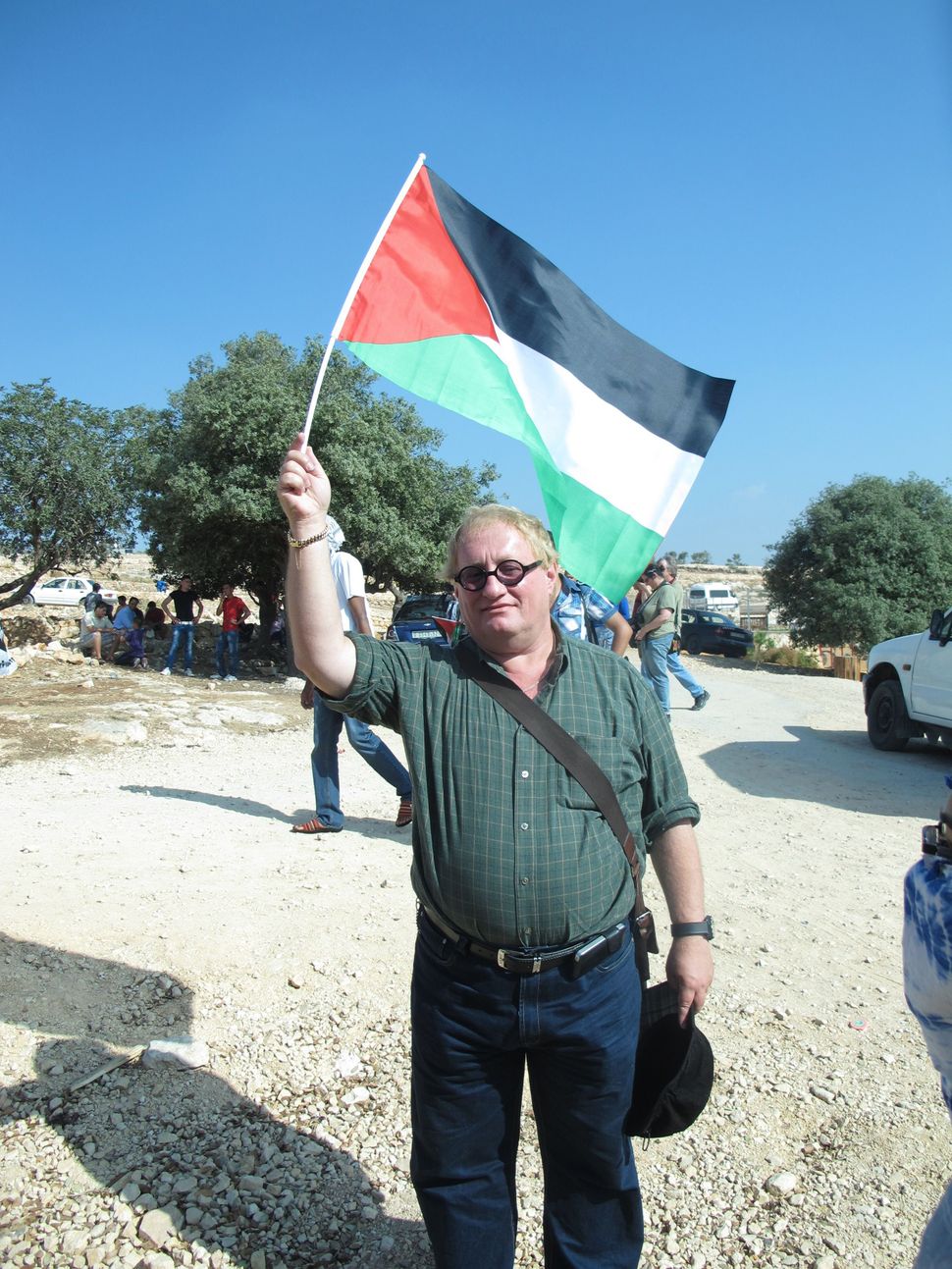 Liberal Jews chagrined at the recent elections in Israel probably should read Tuvia Tenenbom’s “Catch the Jew.” Tenenbom’s book, in which he narrates his travels and conversations in Israel and the West Bank, will not provide comfort. In fact, he holds leftist Jews in contempt. Donors to the progressive New Israel Fund are “self-hating,” and Arik Ascherman of Rabbis for Human Rights is “a beaten Jew, a disrespected Jew, a small Jew.” But “Catch the Jew,” which has topped Israeli best-seller lists and received glowing reviews, displays the mixture of sarcastic incredulity, embattled victimhood and defiant pride with which many Israelis regard their foreign critics. Tenenbom’s readers reelected Netanyahu, and his book clarifies why.

Tenenbom, born in Bnei Brak, lives primarily in New York and Germany, and is a frequent contributor to the Forward. In his first book, “I Sleep in Hitler’s Room,” he interviewed German anti-Semites, claiming the country “has not changed since Hitler’s days in power.” His new book, while set against Judean hills and Jerusalem stone, largely repeats this formula. Tenenbom wanders through demonstrations against the occupation, Bedouin tents and the offices of NGOs. He discovers Jewish self-hatred, Arab deceit but, most of all, foreign ignorance and anti-Semitism. Europeans, and especially Germans, fund anti-Israel propaganda campaigns and incite Palestinians to invent fables about the crimes of occupation. Indeed, the book culminates in a confrontation with the International Committee of the Red Cross; a Martian reading “Catch the Jew” would probably think that the central conflict in Israel is a fight between Jews and the Swiss.

Tenenbom plays to his strengths in exposing Israel’s foes as fools and monsters. The director of the Jewish Theater of New York, he speaks German, Hebrew, Arabic, English, Greek and Spanish (those are just the languages he mentions) and gleefully toggles between various personas. For Europeans, he plays the part of Tobi the naive German, for Palestinians, he is Abu Ali, and for Jews, Tuvia. He easily adapts to Haredim, Knesset members and Tel Aviv sex workers.

People open up to him, or they are exposed as hopelessly naive. A researcher for the human rights watchdog group B’Tselem denies that the Holocaust happened. The European Union runs a Jewish-Arab dialogue group in English, which most of the participants do not speak. Palestinians invent fake atrocities. A German volunteer thinks Israel “implants mines next to Druze elementary schools.” And so on.

But Tenenbom’s revelations are padded and cheapened by lazy generalizations. “Gays,” contrasted to Haredim, “are not into wearing more and more clothes.” Activists, we are told with unintentional irony, “by their very nature don’t relate to people as humans.” Because Rabbi Ascherman’s wife is politically to his right, Tenenbom decides that on “complex issues, more often than not women understand much faster than men.” “Haaretz, like most papers of the West I’m familiar with, is more propaganda than news,” eager to display “all the bad things that the Jews are doing.” (The newspaper is apparently so self-hating that it gave “Catch the Jew” a rave review.) Young black Hebrews “look very much like Barack Obama’s children.” Tenenbom’s sweeping prejudices blunt the force of the particular facts he digs up.

Tenenbom has a fecund gift for attributing faults to leftists. Haaretz publisher Amos Schocken is attacked for not knowing about the existence of an elderly relative who survived the Holocaust. Similarly, because Amos Oz wants to talk about Palestinians, Tenenbom concludes that he, like “the Israeli left” is “consumed with the Muhammeds of their world” to the exclusion of thinking about poor Israelis (“their Yehudas”). Tenenbom assumes the worst, damning an entire political bloc based on one man’s choice of conversational topic. But in this case, he is not just uncharitable; he is also wrong. Oz has bemoaned economic inequality in Israel, and he enthusiastically supported the social protest movement (a movement led by the “leftist” Stav Shaffir, not Likud). Ultimately, Tenenbom does not really seem concerned with Muhammeds or Yehudahs. He would rather have a club with which to beat his political opponents.

Would that Tenenbom had subjected his right-wing interviewees to an ounce of this critique. He has nothing but friendly questions and praise for Knesset member Ayelet Shaked, who approvingly reposted an article that, as she later explained, argued Palestinians “can no longer morally claim a special status for their own civilians” and who thinks the Holot detention center — an open-air prison for African asylum seekers — is “a very good place, very dignified with very good conditions.”

He is similarly content to provide an approving conduit for Moshe Feiglin, who notoriously called for total war on Gaza to push its inhabitants out. Palestinian nationalist myths are skewered, but Tenenbom uncritically follows Jerusalem mayor Nir Barkat’s suggestion to walk around the City of David with a Bible to “see for myself how point-by-point, page by page the two corroborate one another.” The City of David excavations are backed by Elad, highly ideological and religious settlers who care less about science than about constructing national myths and Jewish housing developments. What does Tenenbom make of criticisms of Elad leveled by, for instance, Emek Shaveh, a group of concerned Israeli archeologists? He does not say.

The City of David episode reveals how Tenenbom audaciously inverts the power dynamics of the Israeli occupation. Rather than responding to critics’ claims that the archeological park facilitates Palestinian dispossession in the neighborhood of Silwan, Tenenbom complains that “Silwan, in the heart of Jerusalem, wants to be Judenfrei.” Similarly, he pities Hebron’s Jewish settlers as “prisoners” who live in a “ghetto,” while Palestinians in Hebron build “mansions” with “multi-million euros.” He returns often to theme of fat-cat Palestinians, rich on foreign money. Palestinian unemployment and poverty rates of more than 25% go unmentioned. So do the mammoth legal privileges settlers enjoy over their Palestinian neighbors: water privileges, subsidized housing, access to civilian courts, and voting rights. When he does encounter desperate poverty in the Palestinian village of Burin, he plays with the children and cheerfully observes that they seem happier than the spoiled, “affluenza”-afflicted inhabitants of Great Neck, New York. You wonder why more Great Neck parents do not send their children to play in Burin.

In Tenenbom’s vision, Jews are always the victims, even in a territory they militarily occupy. In Hebron, he vaguely skims over enforced closures of Arab streets, neglecting to mention, for instance, how the army first closed Shuhada Street. Once a bustling market street, Shuhada Street was closed to Palestinians in 1994 after Baruch Goldstein massacred Palestinians, perversely punishing them for being victimized. Similarly, when Tenenbom talks about Sheikh Jarrah, he occludes the grounds of the Palestinian complaint. Critics of Sheikh Jarrah evictions argue that legitimizing pre-State Jewish claims to abandoned houses in East Jerusalem creates a stark double standard. That is because under Israeli law, Palestinians have no rights to property they left in 1948. There are tricky legal details here, but for Tenenbom, the problem is just that the “international community” does not want Jews living anywhere in Sheikh Jarrah. When Tenenbom argues that the International Committee of the Red Cross invented the idea that the West Bank is occupied (the fact of the matter, as Gershom Gorenberg meticulously documented, is that an internal Israeli legal memo concluded as much immediately after the 1967 war), he is not merely writing sloppy history. He is casting the occupation as an anti-Semitic nightmare dreamed up in Europe.

Fundamentally, Tenenbom seems allergic to discussing Jewish power, to asking seriously what it means that Jews have a state, an army, an occupation. Like it or not, Israelis now rule over another people, with guns, attack dogs, and tear gas. But when Tenenbom watches a Knesset argument between MKs and representatives of foreign NGOs, he concludes that the latter “have more power.” Really? How many tank divisions do the NGOs command?

In a telling moment, he observes some foreign volunteers who document and thus discourage IDF abuses of Palestinians at checkpoints (about which abuses, Tenenbom says not a word). “They stand straight,” he writes, “like rulers, and they behave like lords of the manor… Who appointed these kids to be guardians of justice is beyond me.” It is an amazing reversal. Volunteers with cameras rule over Israeli soldiers with machine guns, and the chutzpah of “kids” monitoring soldiers effaces the chutzpah of Jewish “kids” dictating the daily lives of a million and a half Palestinians.

It’s not just that Tenenbom does not see the daily humiliations of these checkpoints, or, say, the military courts which regularly jail Palestinian teens for minor crimes on thin evidence. More startlingly, he doesn’t seem to see the Jewish state at all. The Israeli-Palestinian conflict becomes just another chapter in the “age-old story of Europe’s hatred of the Jew.” In Tenenbom’s vision, it hardly matters who wins Israeli elections: The Jews remain always victims, powerless subjects ruled by goyim.