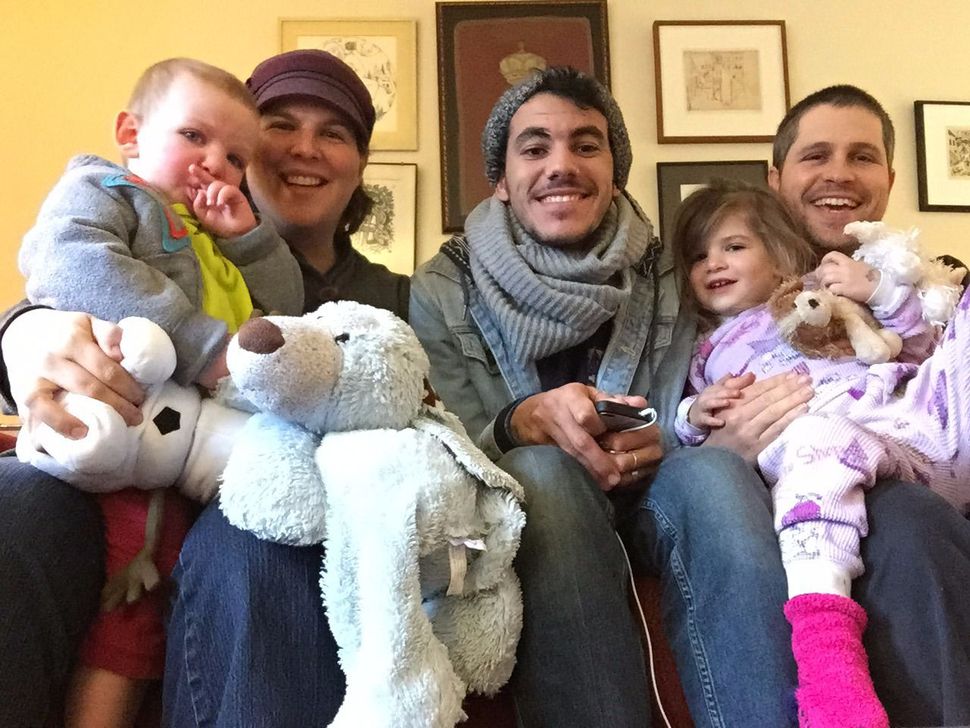 Image by Courtesy of Aviva Fellman

The Forward interviewed Aviva Fellman, 33, the rabbi at in Worcester, Massachusetts, and her husband, Ari Fellman, 32, an Israeli electronic engineer currently working at EMC. The two have been married for four and a half years and have two children — Hadar, 3, and Idan, 22 months. In addition, the family is hosting a young emissary, Aviv, 19, from Israel for the semester by way of the Jewish Federation of Central Massachusetts.

Aviva Fellman first gained the Forward’s attention in 2014, when she made our Inspiring Rabbis list for her work at the Oceanside Jewish Center in Oceanside, New York. During and in the aftermath of Hurricane Sandy, Aviva personally called 300 families in the congregation to make sure they were safe and taken care of. The Fellmans answered our questions on their “date night.”

Forward: How did you come to live together?

Aviva: We met and were engaged within three months and decided that it would make life a lot less complicated when we got married to live together.

Ari: My wife got a new job as a senior rabbi at a conservative synagogue, and this was the closest and only house for rent nearby.

Aviva: Ari usually does, but I’m great at giving gentle reminders and I take the trash cans back inside after the trash is collected.

How are other household chores divided among you?

Ari: Aviva usually does the cooking and baking, as well as packing lunches for everyone. I usually do all of the laundry and makes sure that the kids’ bags are packed for day care. We share the dishes and shopping, and cleaning is done by a professional service we hire. 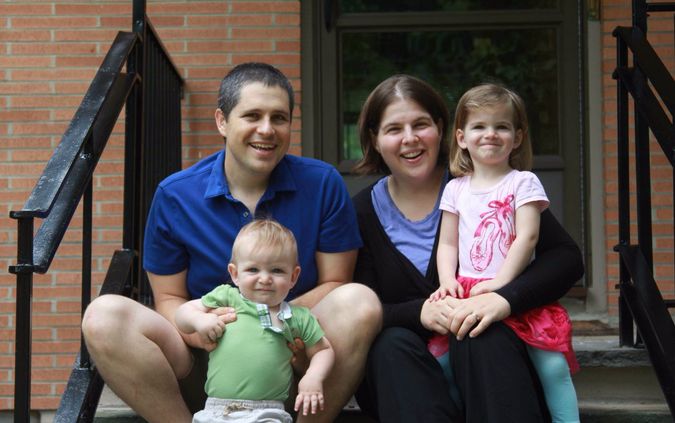 Image by Courtesy of Aviva Fellman

Ari: Aviva, as she’s usually the one to get the kids out of the house in the morning. Hadar likes “fancy grilled cheese,” which is Trader Joe’s quinoa bread with two slices of Miller’s American cheese melted in the microwave and then cut into triangles. Idan usually demands eggy, a two-egg omelet with cheese, and then asks for more.

Aviva: Cloth diaper liners and reusable lunch bags; Avengers for Ari, Batman for Aviv,dinosaur for me and Idan and butterfly for Hadar.

Aviva: We both love the flexibility and flow of the living room and dining room areas in our house. It’s so flexible that we could fit 36 people in that space for our Passover Seder last minute.

Aviva: Probably the story of how we met. I was leading services at a Conservative synagogue in northern Tel Aviv, and Ari had come for a university-aged program that began with services. We spent all night talking at the dinner that followed. Our first date was a couple days later, and we were engaged three months after that. I was on my third year of rabbinical school from the Jewish Theological Seminary at the time and Ari was a captain in the Israel Defense Forces.

Who is first to get up when a child starts crying?

Aviva: Any Shabbat with our family, guests and lots of laughter. Plus homemade challah, which I bake fresh almost every week.

Who is your favorite Jewish comedian?

Ari: Eli and Mariano and Jon Stewart — and not only because Aviva met him once at the University of Pittsburgh around 2001.

What is your favorite room in your home?

Aviva: Our favorite room besides the living room/dining room area is the den, or “the family cave.” It serves as our playroom, our office, our guestroom and our family room.

Aviva: Our ketubah [marriage contract] and chuppah, which were designed and crafted by my parents. Our chuppah is a large quilt, and our ketubah is written on parchment and in the style of the page of Talmud, with the text in the middle, and the text of the Song of Songs around it is the commentary.

What is your happiest and/or saddest memory in your home?

Ari: Every moment we make as a family is happy. One particular sad moment was receiving a card, which was mailed prior to the death of a close relative, but it arrived on the day of the burial.

If you could change one thing about your Jewish practice, what would it be?

What’s one Jewish thing you do that defines your Jewish identity?

Aviva: I cover my head with a hat or kippah to self-identify constantly, but given my job, the better question might be, is there anything I do which is not Jewish? The answer would be no. We actively raise our children with a strong sense of Jewish identity (and bilingually), and that is something that we do as a family.

Ari: I take off from work on Jewish holidays and leave early for Shabbat.

What is the one moment that stands out in your mind of when you felt your Jewishness the most?

Aviva: Standing together under the chuppah and when we named our children in religious ceremonies.