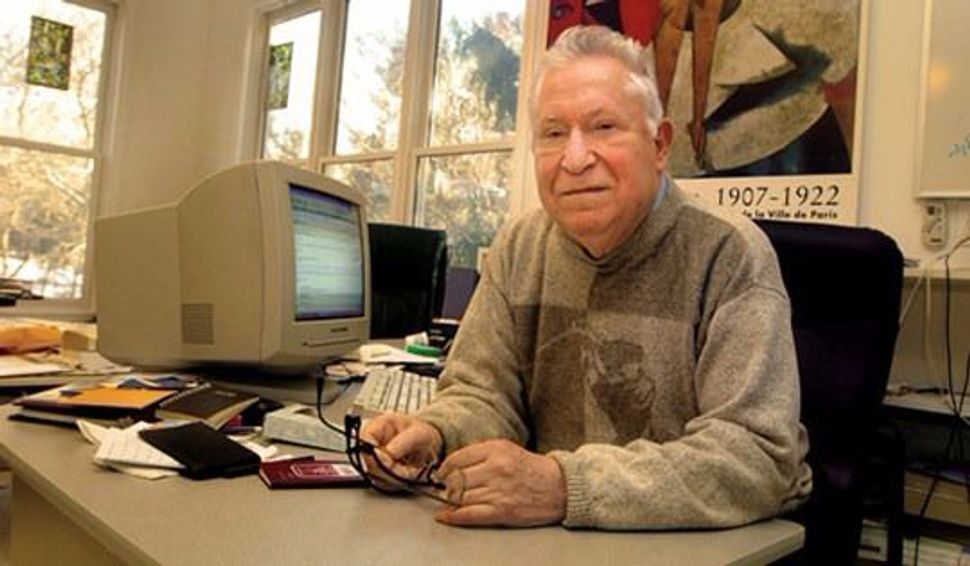 Benjamin Harshav, a translator, poet and scholar of Hebrew and Yiddish literature, died April 23 in New Haven, Connecticut. He was 86.

Harshav was a mentor to generations of students and, together with his wife Barbara Harshav, a prolific translator of Yiddish and Hebrew poetry. Harshav also translated Yiddish and German literature into Hebrew, and wrote his own poetry under the pseudonyms Gabi Daniel, in Hebrew, and H. Binyomin, in Yiddish.

Born Benjamin Hrushovski in Vilna in 1928, Harshav fled with his parents to the Ural Mountains in 1941. During the Second World War he studied mathematics and physics at Orenburg University and at age 19, after the war’s end, published his first volume of poetry in Yiddish.

In 1948 Harshav immigrated to Palestine on the last illegal ship and joined the newly formed Israeli army. In Israel Harshav became part of the literary group “Likrat,” which included poets such as Yehuda Amichai, Nathan Zach and Dahlia Ravikovitch, among others. At the same time he published his own poetry in Yiddish and began translating Yiddish poetry into Hebrew.

In 1967 Harshav created the Department of Poetics and Comparative Literature at Tel Aviv University, where he founded the journal Poetics Today in 1979. Based on his studies with Yale University literary critic Rene Wellek, as well as with Yiddish linguists Max and Uriel Weinreich, Harshav created theories of versification founded on the history of Yiddish and Hebrew literature. His volumes of translations of Hebrew and Yiddish works made those literatures available to an international audience.

After leaving Tel Aviv University in 1987, Harshav became the Jacob and Hilda Blaustein Professor of Hebrew Language and Literature at Yale University, and in 1992, a professor of Slavic languages and literature. He was a fellow of the American Academy of Arts and Sciences and in 2005 he received the Emet prize for his literary scholarship. A new anthology of his Yiddish and Hebrew poems is currently being prepared for publication by Carmel Publishing House in Israel.