A Pogrom Against Warsaw’s Jews 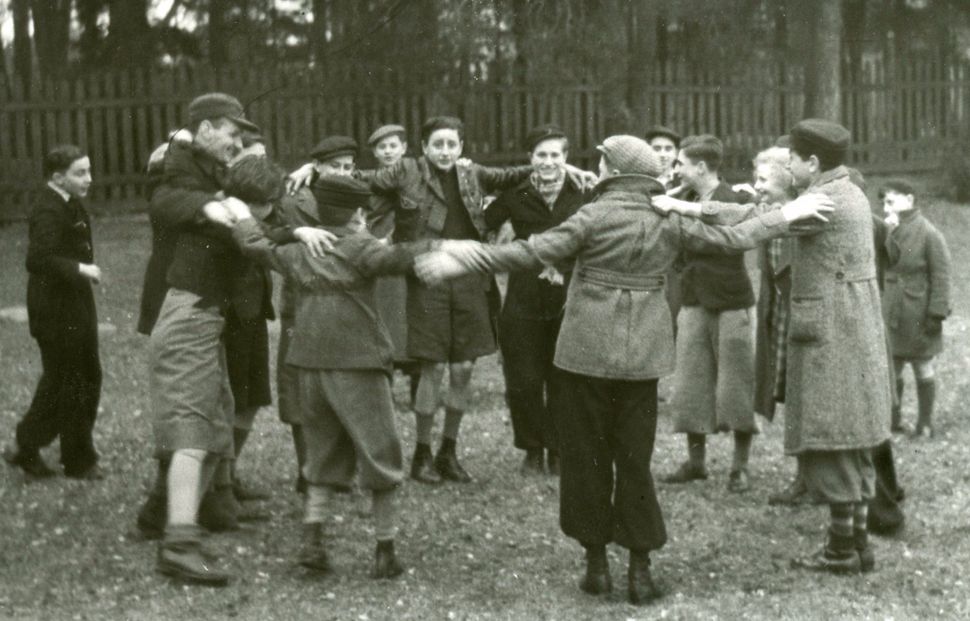 Children dance the hora in 1938 Warsaw prior to departing for England on a kindertransport. Image by Leon Leneman/Forward Association

Yente Telebende, a regular Forverts character created by B. Kovner, chimed in on the death of the great writer I.L. Peretz. When Telebende saw the photograph of Peretz on the cover of the Forverts, she clicked her tongue, clapped her hands together and yelled out: “What? Your shoshalists got another one elected? Meyer London was voted in not long ago.” “Yente,” I said, “don’t be silly. No one was elected.” “So whose picture is this?” she asked. “Is it some kinda minister?” “No,” I yelled out,” it’s not a minister.” “So who is it? A guy who ran away from his wife? Oy, America!” “Yente, keep quiet. You won’t figure it out. It’s a picture of the greatest Yiddish writer!” “What’s his name?” she asked. “Yitzkhok Leybush Peretz,” I told her. “That’s a weird name,” she replied. “A Jew with three names? He’s really indulgent. That’s a name for a Jew with a long white beard, or someone who is left-handed, or someone from Philadelphia. Is he dead?”

Emboldened by the Nazis, bands of anti-Semitic Polish hooligans perpetrated a pogrom against Warsaw’s Jews during Easter. While details of the attacks have not been made clear, what is known is that many Jews were wounded with knives that the attackers used to slash them. According to the official Nazi press, newspapers from occupied Poland say that the Germans were the ones to stop the pogrom, a claim that hardly seems likely. It appears that the Endeks, the Polish fascists, have forgotten that the real enemies of the Poles are the Nazis and instead of fighting the Nazi occupation, they are attacking the Jews. News of the conditions of Jews in Poland is leaking out slowly, often in the form of letters carried by refugees who have escaped from Poland. One letter published in a Belgian newspaper described how the Nazis forced 800 Jews to stand on the main street of Warsaw and shout, “We Jews wanted this war.”

The newspapers of the Arab world are burning with wrath after Tunisia’s president, Habib Bourguiba, suggested that the Arabs and Israelis sit down at the table and begin peace negotiations. Cairo’s Al-Ahram, considered the official organ of President Gamal Abdel Nasser, said that Bourguiba’s idea is a “plot against the Arabs that was planned by the imperialists and the West.” The prime minister of Jordan, Wasfi Al-Tal, said that his country’s only response would be to remain with the current plan to reinstate the rights of the Arabs in Palestine. Bourguiba made his remarks to a group of students in Tunis earlier in April. He suggested settling Arab refugees in a specific area of Israel and that Israel should accept the partition plan of 1947, which would mean returning a significant amount of territory, including Jaffa, Akko and portions of the Galilee and the Negev. The most important point Bourguiba made was that the Arabs would not be able to win a new war against Israel.

A Pogrom Against Warsaw’s Jews