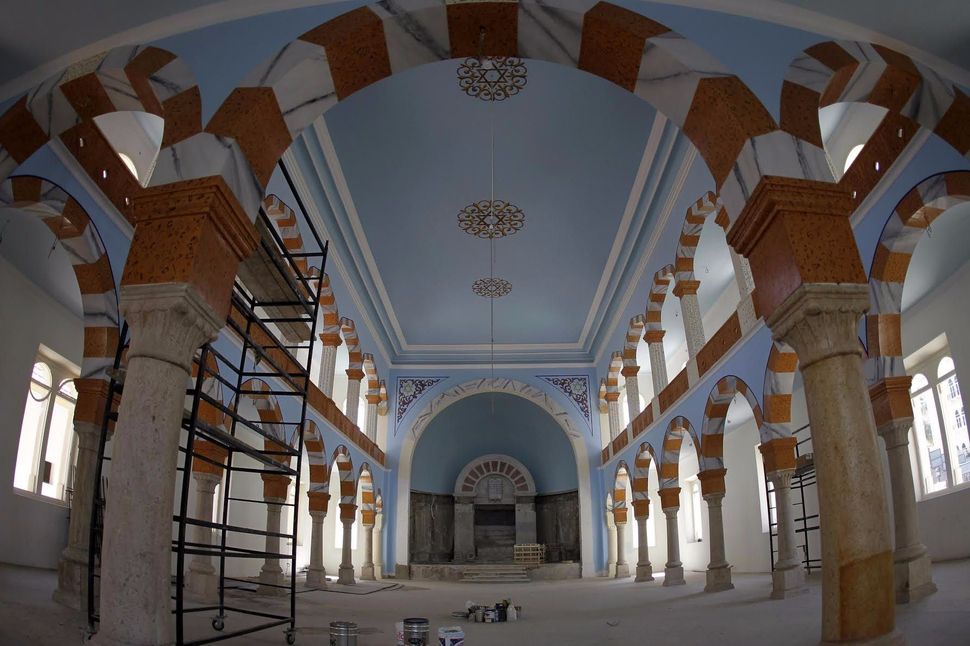 No one could quite believe it when the major political factions in Lebanon ­— including the anti-Israel Shi’a party Hezbollah ­— threw their support behind a million-dollar synagogue renovation project in Beirut in 2009.

But if a public display of Lebanon’s Jewish past was what visionaries behind the yearlong, highly publicized restoration had in mind for the future of the Maghen Abraham Synagogue, that isn’t clear from the site.

The heavily guarded white-and-gold building sits in a wealthy area of downtown Beirut, overlooked by former prime minister Saad Hariri’s compound and across the street from a recently erected luxury apartment complex. For decades before it was renovated, the synagogue’s walls were covered in anti-Semitic graffiti and the site wreaked of urine.

Five years after reconstruction, the synagogue’s doors are still locked and the lights are off. Gaining entry is nearly impossible, requiring permission from the Jewish community’s president, and bureaucratic wrangling with Beirut’s security officials. The Forward’s request to visit the site was denied.

The Maghen Abraham Synagogue, originally built in 1925 and one of more than a dozen synagogues that operated in Beirut, is one of the scarce remnants of Beirut’s Jewish past. Its delayed opening has shed light on just how precarious the situation is for Jews in Lebanon.

Since the exodus of nearly 1 million people during the 15-year-long civil war, only a few dozen Jews remain, living quietly in a country that sees the Jewish state to its south as an enemy.

“The word ‘Jewish’ is a very heavy word in Lebanon,” said Nagi Georges Zeidan, a Christian Lebanese historian writing a book on the country’s Jewish history. “Those who stayed keep it a secret. They’re scared to death, and they often don’t even tell those they are friends with that they’re Jewish.”

Among Lebanese, the synagogue’s delayed opening is widely rumored to be due to threats, as spillover from the war in neighboring Syria continues to threaten the country’s fragile sectarian fabric.

Yet while the synagogue undoubtedly has its opponents in Lebanon — it was attacked twice in 2009 — Bassam al-Hout, a Muslim lawyer for the community denied the rumors of threats as baseless.

Isaac Arazi, a representative of the Jewish community, who raised funds from the Lebanese diaspora to renovate the site, insisted that it’s not anti-Semitism but national instability that has prevented the synagogue’s reopening. Without wishing to elaborate, Arazi told the Forward in an email, “The situation of Jews is like all Lebanese citizens — nothing sure, nothing certain.”

But in a country that has seen continual conflict with Israel over the last few decades, there is a risk to being Jewish in Lebanon.

“The Israelite community” — a name Jews have lobbied to have changed in an attempt to distance themselves from Israel — is officially recognized as one of Lebanon’s 18 sects, but members of the community shy away from attending public functions on the community’s behalf, presumably for their own anonymity and safety. They pray quietly in homes in East Beirut.

But Jews didn’t always live in the shadows.

Lebanon’s history is unique to the Arab world. Its Jewish population soared following the establishment of Israel, as Jews fleeing elsewhere around the Middle East settled in the country known as a bastion of diversity. In the 1950s, the population peaked at about 10,000, a significant jump from the some 3,500 who lived there in 1932, some with a lineage believed to date back millennia.

Relations between Jews and others were generally positive, Zeidan said, though tensions flared at times with nationalists following Israel’s founding. He cited a series of violent incidents targeting Jews, but said that much of Lebanese society viewed Jews as one among Lebanon’s many religious sects, with a reputation as honest tradesmen.

Mariam, a bubbly Jewish woman in her 80s who lives alone in a city several hours outside Beirut, reminisced fondly about her childhood memories of the Jewish quarter of Beirut. She remembers listening in on holiday services there, though women did not sit inside synagogues.

Her husband, a Christian, died seven years ago, and her modest apartment is decorated with an assemblage of religious symbols — a picture of Jesus with an aura around his head, a Hanukkiah with leaning candles and a copy of the Ten Commandments, which hangs on the wall.

“This country was beautiful,” Mariam, who asked that her real name not be used, said in Arabic. “There were Jews, Christians and Muslims, Armenians and Kurds, and in one family, you could find all of them. But now, people here don’t like Jews.”

With the Six-Day War in 1967, much of the Jewish population fled Lebanon ­— but it was during Lebanon’s bloody 15-year civil war that Jewish life in the country came mostly to an end.

While Jews were careful to remain politically neutral during the war, the Jewish quarter of Beirut sat squashed between the Sunni Muslim and Christian areas. As a result, Jewish structures were caught in the crossfire, looted and desecrated — turning the quarter into a no-go zone.

It was, ironically, an Israeli bombardment in 1982 that destroyed the Maghen Abraham Synagogue. It had been meant to target Palestine Liberation Organization members who were, allegedly, protecting the site.

As the community dwindled and ultimately disappeared, Mariam felt safe — even as widespread anger grew against Israel — only because her husband was a Christian.

“The Arab people just don’t understand that Jews are not all Zionists, and that is the problem here,” she said. “About half the people know I’m Jewish, but they know my family is Christian. I’m not afraid for my own safety. I’m old, but I am afraid for my children.” Her children, however, have all been raised Christian.

The country’s Jewish cemeteries are unkempt and overgrown with bushes and thorns, and its old Jewish homes are now lived in by Christian or Muslim Lebanese citizens.

In Saida, a city two hours south of Beirut, the old Jewish quarter is today a rundown, impoverished part of the city. A street sign that once read “Jewish quarter” has since been replaced with a “Gaza street” sign — a protest against Israel’s war with Lebanon in 2006. Posters with the faces of the PLO’s former and present leaders, Yasser Arafat and Mahmoud Abbas, are plastered to the walls.

Down a short and narrow dark pathway off the main courtyard, behind a big, wooden door on the left, hides the city’s old synagogue, built in the late 19th century.

A 25-year-old man of Syrian descent with a carefully trimmed beard answered the door with a welcoming smile. Inside was the only home he and his family have ever known, with several pairs of shoes scattered by the door, and blue paint, one of the last reminders of its past as a synagogue, fading from the stone walls and ceiling.

Zeidan estimated that Lebanon’s remaining Jewish community will perish within the decade.

“Most of them are old, and those who left hold no hope to return,” he said. “All they have here are their memories.”

But in areas of the country where Jews used to live, Muslims and Christians alike expressed hope that the country could return to its multicultural past.

“My father had Jewish friends,” said a man of Palestinian origin who grew up in the old city of Saida. “I wish we could live together again. This was once a country of peace, and God willing, I hope it becomes one again.”