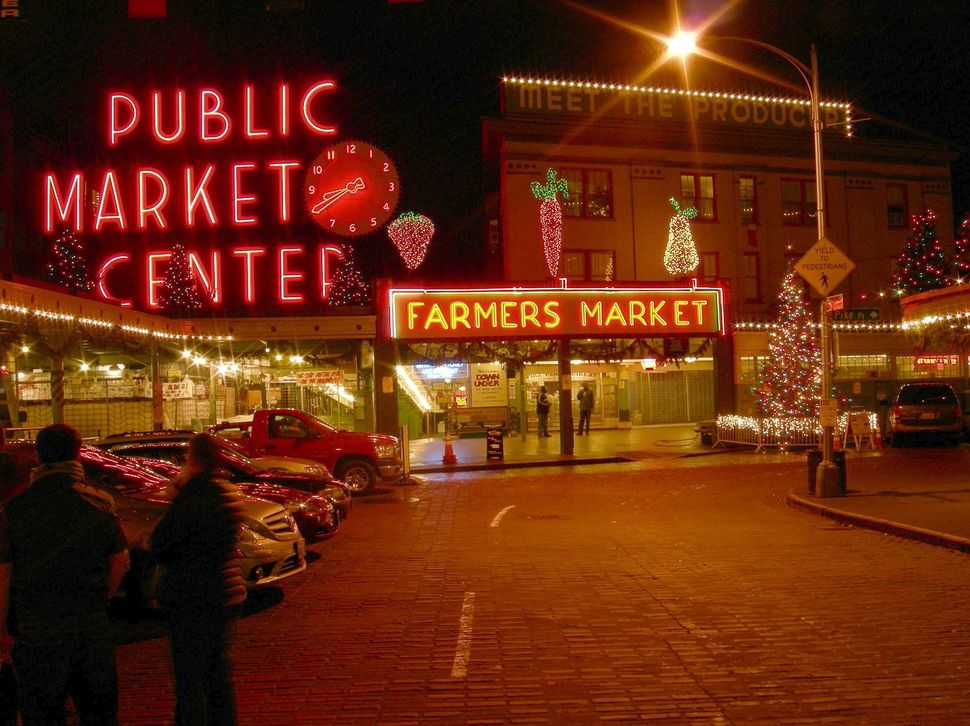 The stamp of Sephardic Jews on Seattle is strong, from Benaroya Hall, where the Seattle Symphony plays, to the real estate holdings of the Alhadeff family, best known for the now-closed Longacres race track. But the ink of Sephardic influence is fading from Pike Place Market. The oldest operating market in the country, the biggest tourist attraction in Seattle and the heart of the city, it once thrived with Sephardic vendors and served as a de facto community center to the nation’s third largest population of Sephardim. Today, only three Sephardic business owners remain in the historic market. They are the proud remnants of a community that they helped build into what it is today.

Jack Policar and Solomon Calvo, Seattle’s first two Sephardic Jews, arrived in the city from Turkey in 1902, choosing the location because it reminded them of their homeland — and because New York was already too crowded. Not speaking Yiddish, the language of the local (Ashkenazi) Jewish community, the only people they could communicate with in Seattle were local Greek immigrants, who happened to be concentrated in the fishing industry. So Calvo and Policar, young and untrained in a trade, found a home at the market’s fish shops. By 1912, Calvo owned his own shop, the Western Fish and Oyster Co. As the influx of Sephardim continued (encouraged, in part, by messages home from Calvo and Policar), new arrivals migrated toward where Ladino (a traditional language of Sephardim) was spoken and where people understood their culture: Calvo’s shop, and those of the later immigrants who followed Calvo’s example.

One such immigrant was Morris Tacher, owner of Tacher’s Turkish Restaurant. The eatery served as a gathering point for the Sephardic community, a place where immigrants and their families from Turkey, Syria and the Greek island of Rhodes could “come con gana,” Ladino for “eat with a good appetite.” The market was filled with Sephardic shop owners, their (also Sephardic) employees, and Sephardim who worked downtown and came to the restaurant to hang out. In the documentary film “The Sephardic Jews and the Pike Place Market,” Lucille Spring (whose father, “Pinky” Almeleh, owned a produce stand in the market) called it a secular synagogue, for its centrality to daily Sephardic life in Seattle. Sol Tacher (Morris Tacher’s son) said: “Without the market, the Sephardic community couldn’t have grown the way it has grown. It couldn’t have taken the part in the city of Seattle it has taken.”

Sol Amon, owner of Pure Food Fish Market and one of the remaining Sephardic owners in Pike Place, laments the bygone days of the market. “There’s no gathering spot for Sephardim in Seattle,” he said. The Sephardic community has the synagogues, but no secondary home. None of the three remaining Sephardic vendors could name any sign of the Sephardic history still present in the market, though Jack Levy, the Sephardic owner of Three Girls Bakery, does promise that all his employees “leave knowing a little Ladino” after a stint in his shop — but “probably not nice words.” Without digging into the history of the market, there’s no way a shopper would know of its historic ties to Sephardic Jews.

Carlee Kulman, Amon’s granddaughter, says that occasionally the shop gets customers who are aware of their ownership, who have sought out that fish market over others in the market because of the Jewish connection. A customer once told her that in Seattle, “you don’t know who is Jewish and who is not.” But she believes that if you venture into the community, you see that the culture is still alive, though perhaps not as obviously so as it once was in Pike Place Market: “We’re still here. You just have to look for it,” she said.

Where you’ll find those hints of Sephardic culture and Jewish ties is hidden upstairs at Pure Food Fish Market, where Kulman takes phone orders from Jews around the country and donates to local synagogues and to Jewish community events. It’s a floor away from their tubs of local Dungeness crab and sea scallops that tempt locals and tourists alike. The slight disconnect of a Jewish vendor selling shellfish harkens back to a century earlier, when Sephardic vendors — including, Levy recalls, his own father — struggled with the challenges of running a business that had to stay open on Saturday, the market’s busiest day. Still, no matter what, they always shut down for the High Holidays.

Amon has been around the longest of the remaining vendors, having started at the market working alongside his father, Jack Amon (who immigrated to Seattle from Turkey in 1911), before the two went into business together in 1957. He is proud that some things haven’t changed much at his shop “We’re really still an old-fashioned fish market,” he said, pointing out that the other fish shops in the market focus on take-out food or tourist entertainment, i.e. throwing fish.

The octogenarian still shows up for work every day. He reminisces about the days when most of the fish and produce stands were Sephardic owned, explaining that with little education, this was an easy way to get into business, a way to raise a family and send children to school. “I never had the opportunity to get a formal education,” he said, but he added, “even though I sent nine people to college from here.” He sat with 24-year-old Kulman in an office overlooking the shop. Kulman, who graduated from college a few years ago and now works at the shop full time, is too young to remember the Sephardic community here. Still, she describes the market community as a family. “People switch stores, but they stay in the market, because it’s a family,” she said. “You see the same faces every day.”

That market family is the same feature that Betty Halfon brought up right away. Although her store, Sweetie’s Candy, is only about two decades old, Halfon has long ties to the market. Her mother’s maiden name is Calvo (as in Solomon, one of the first Sephardic Jews in Seattle). Halfon misses the sense of community among the Sephardic vendors, but she said that, even today, “the market has its own sense of community.” She described a sense of inclusiveness, a familiarity that is shared among all the vendors, sometimes literally. Later, Sol Amon says that he believes she’s related to his uncle — and that Levy, the third remaining Sephardic vendor, is the son of his cousin. Halfon mourns the old sense of community in the market, and says the way that Sephardic Jews did business was different, with a warmth she remembers from hanging around in her younger days. But “retail business is tough,” she said, and, like Amon, pointed out that the children of the Sephardic vendors and workers went on to get an education and to find other types of jobs.

Levy, like Amon, grew up working in his father’s market shop; his dad owned a few different places, first working at other produce stands and then owning his own. Levy worked summers at the market during school. He recalled many Sephardic Jews hanging around then, wearing suits and hats, and described them as “the stylish old guys.” From them he learned a lot about the industry: how to display and rotate product, and how to work hard. “They never stopped,” he said, adding that it wasn’t just a career to them; they all kept working long after they had “retired.” “As soon as you don’t have a purpose, you’re done,” Levy said. And so Levy, who is 62, does not intend to slow down anytime soon.

Levy, Halfon and Amon were all but born into the market family, but they are the exception, not the tradition. Amon says the success of the Sephardic vendors at the market is what led the community away. They did well, he says, and now their families are full of lawyers and doctors. When he first started, all of his employees were Sephardic Jews. Now there is only one (who is, of course, related to him — married to a first cousin).

Today, the market plays the same vital role it did more than a century ago: welcoming the city’s immigrants with jobs and opportunities. As the Sephardim fade, they are replaced with people who, like their Sephardi forebears, less than a century from now, might be funding symphony halls and sports arenas: the Hmong flower vendors and Filipino restaurateurs. For now, though, the last of the Sephardic-owned businesses don’t plan to go anywhere anytime soon. Levy’s 27-year-old daughter is learning the ropes at Three Girls Bakery, and Kulman represents the fourth generation in Amon’s shop. She is staunchly committed to keeping the traditions of her family and the market alive: “My grandpa is here. My great-grandpa was here. My cousin is here. We’re physically in the store. We’re not going anywhere. We’ll still be the Jewish fish shop in the Pike Place Market.”