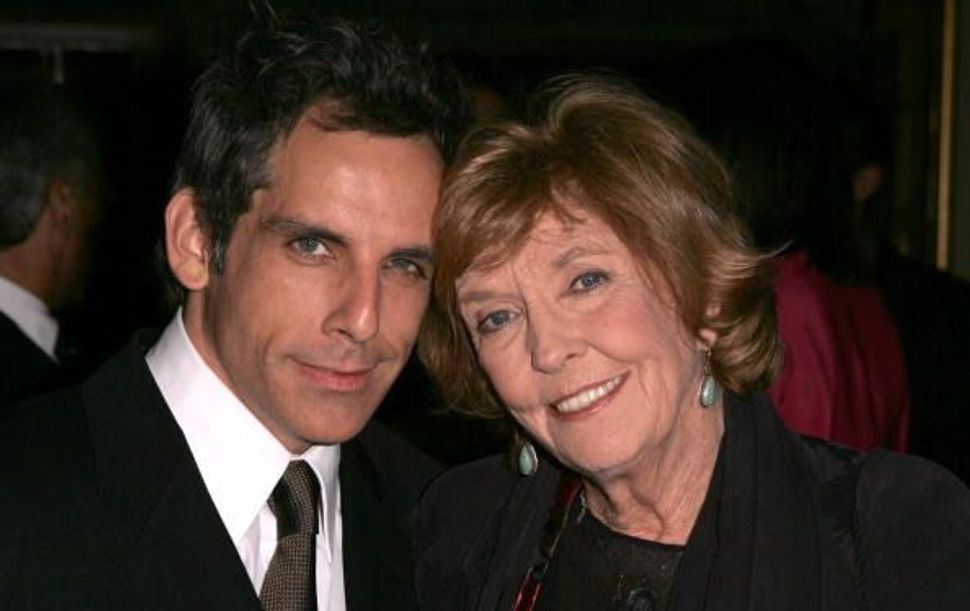 Anne Meara, who died on May 23 at age 85, was considerably more than one-half of the beloved comedy act Stiller and Meara. Born into a Roman Catholic family, she converted to Reform Judaism in 1961, as she told “People Magazine” in 1977, because she “wanted my children to know who they were.” Those children, actors Ben and Amy Stiller, as well as her husband Jerry Stiller, benefited from her intense vivacity and enthusiasm about Judaism, as in everything else that she embraced. In their early years as comedians, Stiller and Meara concocted the characters of a loving couple, Hershey Horowitz and Mary Elizabeth Doyle, whose differences did not impede affection. Their exchanges moved the heart of TV host Ed Sullivan, an Irish-American himself long married to a Jewish woman. Sullivan invited them on his show dozens of times. Yet Stiller and Meara’s was a gently misleading dialectic insofar as it purported to follow the venerable comic template of Abie’s Irish Rose (anticipating the current Broadway comedy “It Shoulda Been You”). In reality, Meara was as involved with Judaism, if not more so, than Stiller.

Enchanted as a girl by the children’s radio show “Let’s Pretend” starring Miriam Wolfe (born Miriam Wolff in Brooklyn), Meara dreamed early on of a showbiz career. A “superfan” of the radio show which adapted fairy tales, as she stated in a preface to memoirs by Arthur Anderson, another actor from that series, she trained diligently and built impeccable credentials as a serious actress. Working with the noted pedagogues Alfred Linder and Uta Hagen, by 1949 Meara was performing small roles in high-profile plays, such as Sean O’Casey’s anti-war drama “The Silver Tassie,” performed at Carnegie Hall.

In 1956, Meara opened on Broadway in Turgenev’s “A Month in the Country” directed by Michael Redgrave, acting alongside Luther Adler, Uta Hagen, and Sorrell Booke. In 1957 she was in Brecht’s “The Good Woman of Setzuan” with Zero Mostel, Uta Hagen, Nancy Marchand, and Gene Saks. She also played The Second Witch in Joseph Papp’s Shakespeare in the Park production of “Macbeth,” with other roles in Brecht’s “Puntila,” Shakespeare’s “As You Like It,” and “Two Gentlemen of Verona.” The following year she played a prostitute in the landmark production of “Ulysses in Nighttown” starring Mostel as Joyce’s Leopold Bloom. Joyce’s “Ulysses” and its protagonist would captivate almost all the Stiller mishpocheh, as her husband and daughter would also broadcast excerpts from the book. Yet raising a family and keeping food on the table made a regular paycheck from touring in comedy routines irresistible. Her partnership with Stiller, not without its storm and stress, as expected in the extremely difficult profession which both had adopted, bolstered her career changes. Interviewed in 2011 at the Columbia University Graduate School of Journalism, listening to Stiller explain that they always live in the present, not the past, Meara broke in to say, “You’re my rabbi, baby.” Clearly she admired her partner’s life philosophy, as expressed in his “Married to Laughter: A Love Story Featuring Anne Meara” (2001). One touching aspect of the couple’s interviews is how intently Meara watches Stiller and weighs his comments, not just to be prepared with a characteristic snappy retort. At the same Columbia interview, when asked what she thinks of Mark Zuckerberg, Meara instantly transformed into a Jewish mother with a pained fixed grin, carping: “He never writes, he never calls.” Comedy was apparently in her genes; her father, after years as a lawyer, retired to the Chalfonte Hotel on West 70th Street, not far from the Stiller home on Riverside Drive, where he launched a new career as a comedy writer for the couple.

In an endless list of sitcoms and screen comedies where Meara may not have expressed her full dramatic potential, she always cultivated her interest in Judaism. She appeared in “Lovers and Other Strangers,” (1970) written by Renée Taylor and Joseph Bologna, yet another comic variation on the travails of a Jewish-Catholic couple, as well as Ira Levin’s thriller “The Boys from Brazil” (1978), about a postwar Nazi plot to clone Hitler. As Mrs. Curry, the adoptive mother of one of the cloned boys, she begs Laurence Olivier, as the Simon Wiesenthal-like Ezra Lieberman, not to make the truth public. This scene with the legendary stage hero Olivier, albeit by then ill and giving one of his weaker performances, must have been deeply important to Meara, whose devotion to the theater was a lifelong constant. In Oliver Sacks’ “Awakenings,” (1990), her comic timing came to the fore as Miriam, a Jewish patient emerging from a decades-long coma. Asked by a nurse to take her blood pressure, Miriam snaps: “I’ve been sitting still for 25 years. You missed your chance.” When informed that her husband had divorced her years before, Miriam exclaims with relief, “Oh, thank God!”

Four years previously, Meara had popped up in as a different Miriam, the sister of Moses and Aaron, making matzoh during the Exodus from Egypt, on “Shalom Sesame,” a spinoff from Sesame Street. Intended to teach children about Israel and Judaism, “Shalom Sesame” was reprised in 2010 with a different cast. As recently as 2011, she was a plausible retired Yiddish theatre star, acting alongside Stiller in . Not the least expression of Meara’s Yiddishkeit was her indefatigable devotion to tzedakah, from appearances at charitable events to recording a promotional video not long ago for the American Friends of the Rabin Medical Center. Irreverent about her early Catholic school education, she obviously relished making jocular commercials with Stiller for Blue Nun wine and acting in “Nasty Habits” (1977), Muriel Spark’s satire of a Watergate-type scandal re-enacted by nuns in a convent. A gloriously funny and humane person, Anne Meara was also an actress and writer – she completed two full-length plays – of great gifts.