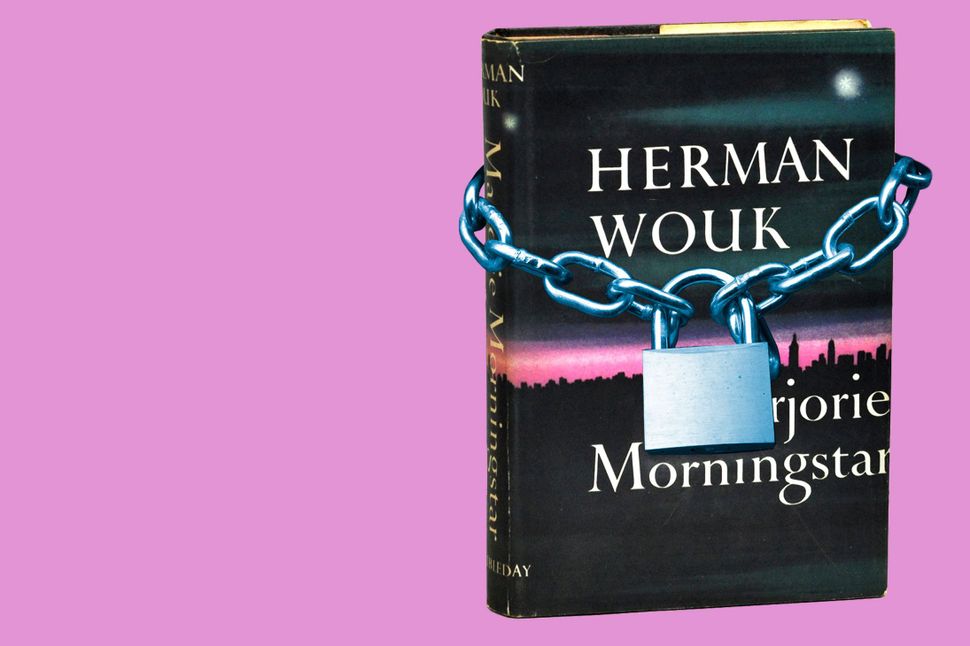 When I was a young teenager in the late 1970s, my father forbade me to read “Marjorie Morningstar,” Herman Wouk’s 1955 novel chronicling the eponymous Marjorie’s coming of age in the 1930s. Marjorie, the daughter of Jewish immigrants from Eastern Europe who worked their way out of the Bronx and to Manhattan’s Upper West Side, is introduced as a willful, beautiful teenager with a bevy of admirers. In her new social circle she graduated from dating City College boys and moved up to keeping company with young Columbia University men; she left the boy whose father owned a garage in the Bronx for one who was a department store heir.

I furtively read my liberal grandmother’s Reader’s Digest condensed edition, not quite understanding what my father found so objectionable about the book. In fact, his objection made me all the more determined to get through the 500-plus pages. I suspect that my father thought I was too young to read about Marjorie’s love life, which included numerous “necking” sessions with various boys and ultimately an affair with Noel Airman, an assimilated Jew 10 years her senior.

Perhaps my father had once had a Marjorie of his own who broke his heart. Perhaps he simply thought of Marjorie as just another “Shirley,” a forerunner to the now pejora- tive descriptor of the Jewish American Princess.

Marjorie Morningstar and Brenda Patimkin, the latter from Philip Roth’s “Goodbye, Columbus,” were the first JAPs of modern literature. But unlike their descendants, these JAPs were sexually liberated and desirable. These daughters of the nouveau riche gave their families social standing. Until I discovered Marjorie, I had never encountered anyone so single-minded, so confident to pursue her dreams. Marjorie was an aspiring actress; I was a fledgling writer. When I grew up, I wanted to be like her.

Forty years later, as the novel turns 60 and Wouk has just celebrated his 100th birthday, I decided to revisit the work that made such a deep impression on my father and me.

Only then did I realize how uncomfortably close to home the novel was for my father, who also came of age in the 1930s and ’40s. Marjorie was a forerunner of the women’s movement, and my father, much older than my mother, was initially baffled by what he called “women’s liberation.” Yet he was supportive of my mother’s decision to go back to school. In that sense, my ambitious mother was a version of Marjorie.

My father was also just a generation into the American dream, like Marjorie’s family and Wouk’s parents. Like Wouk, my father was a veteran of World War II and a naval officer. Both were Jews and Ivy League graduates. Both were caught up in the maelstrom of war and came out all the more patriotic for it. Through the war, they were pulled out of their circumscribed lives and saw a world that was more exotic and even more stratified than the Ivy League.

My family, the Boltons, even had a passing acquaintance with the Wouks. Aunt Gladys claimed that she dated Herman Wouk in the early 1930s when she was a student at Connecticut College, a women’s institution. She swore that Marjorie was a composite of her and of Wouk’s sister Irene. She confessed to rejecting Wouk because, as she put it, he was “too Jewish.”

That wasn’t surprising to me, since the Boltons were intent on assimilating into American life. My grandfather changed the family name from “Bolotin” so that he could pass as a WASP at Yale. My grandmother, the daughter of a rabbi, made roast pork on her first night in her own kitchen. Marjorie, the inexperienced actress, takes a similar stand by abandoning the name Morgenstern and adopting Morningstar as her Anglicized stage name. But Marjorie can’t bring herself to eat pork or shellfish, which serves as a bit of foreshadowing. At the end of the book, she returns to her roots. She marries a certain Milton Schwartz, becoming a doctor’s wife who keeps a kosher home and has her own brood. Except for the kosher home, this was Aunt Gladys’s life, too.

At the age of 16, Marjorie anticipates egalitarian Judaism as she becomes aware of how male-centric the world is. At her brother’s bar mitzvah she has an epiphany that “the very word Hebrew had a rugged male sound to it.” Later, Marjorie understands that men determine the trajectory of her acting career. Much of the narrative shows her efforts to be more than a rich spoiled girl, to make it on her own.

Today, Marjorie remains impressive to me as she swims in the pool of a kosher resort on Long Island in a daring flesh-colored swimsuit. And after her on-again, off-again courtship, an older Marjorie agrees to have sex with Noel though she is not particularly in the mood. But she remains in control, and this verisimilitude resonates throughout the decades.

I suspect that my father had these scenes in mind when he censored my reading. But maybe it goes deeper than that: My father may have been a closet feminist after all. Adult Marjorie’s seeming dependency on a man did not sit well with him, and he didn’t want her in my life at an impressionable age. Marjorie and Aunt Gladys appeared to be ultimately successful for reasons that perhaps made him wince. My father didn’t want me to be just another pretty face.

But now I see that he missed one of the novel’s profound lessons: Despite ending up in suburbia with prematurely gray hair, for most of the novel Marjorie defies convention, and continues to do so today.

Judy Bolton-Fasman has recently completed a memoir about her father.