The Secret Jewish History of The Grateful Dead 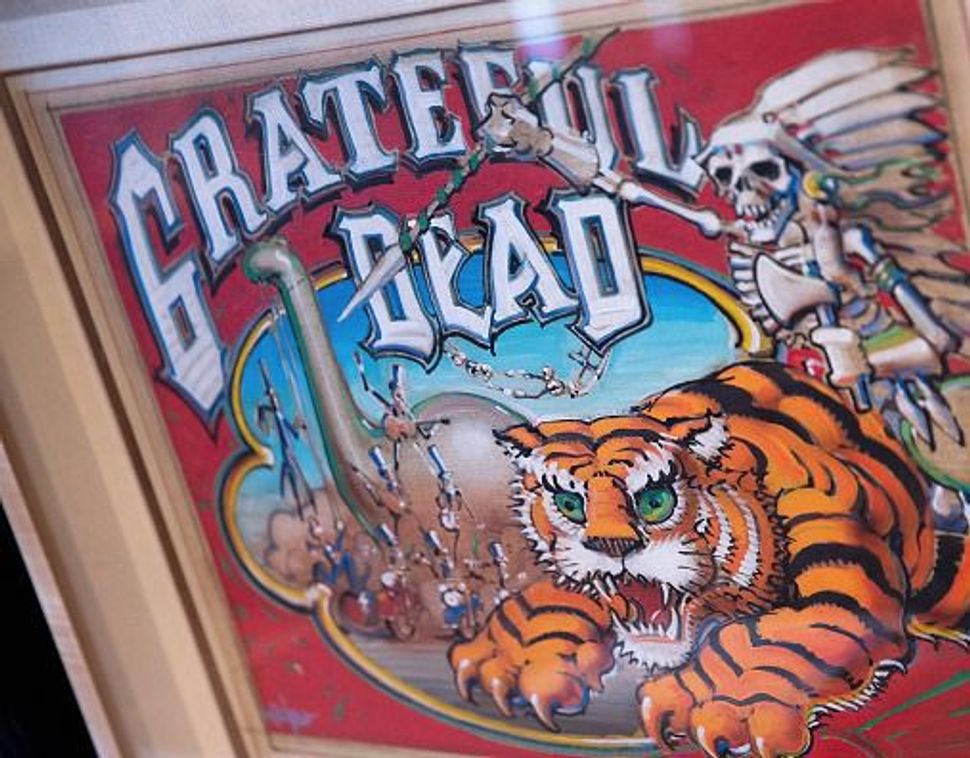 The Grateful Dead last performed at Chicago’s Soldier Field on July 9, 1995. One month later, the group’s unofficial leader, singer-guitarist Jerry Garcia, died of heart failure brought on by years of drug abuse, and the band ceased touring under that name, instead alternately calling itself The Dead or The Other Ones, or forming spin-off bands with one or two members and other musicians from outside The Dead’s inner sphere.

Now, almost exactly 20 years to the day, and 50 years after the group first performed in 1965, the core surviving members — bassist Phil Lesh, guitarist Bob Weir and drummers Bill Kreutzmann and Mickey Hart — are reuniting as The Grateful Dead for a handful of farewell shows in Santa Clara, California, on June 27 and 28, and then back at Soldier Field on July 3, 4 and 5, to mark what they are calling “the original members’ last-ever performances together” under the name The Grateful Dead. They’ve drafted Phish guitarist Trey Anastasio to fill Garcia’s role, with pianist Bruce Hornsby and keyboardist Jeff Chimenti fleshing out the band.

For a group with a significant Jewish following, there was never much on the surface that was Jewish about The Grateful Dead. Over the course of the band’s 30-year existence from 1965 to 1995, at least a dozen musicians held positions in the band, but only one member, drummer/percussionist Hart, was Jewish. Born Michael Steven Hartman on September 11, 1943, in Brooklyn, and raised in the heavily Jewish Five Towns area of Long Island, Hart is best known for bringing non-Western rhythms and time signatures to the band from Asia, Africa and Latin America, but these never included any Jewish nuances. 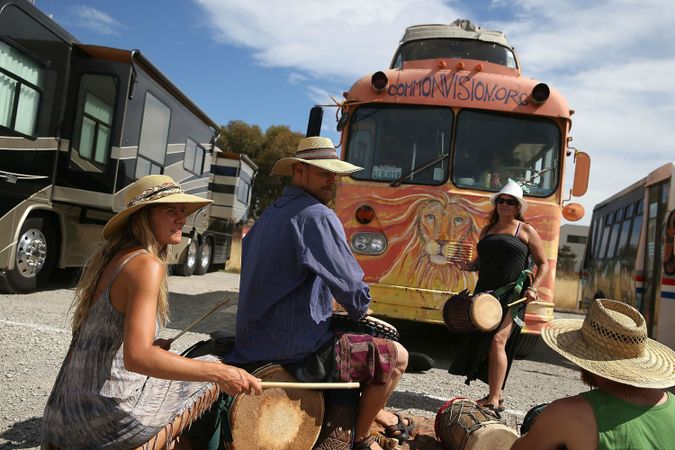 Still, Jews were, and to this day remain, a visible presence among the fanatical followers of the Dead, who are known as Deadheads. In the tent villages that popped up around arenas and stadiums wherever the band was playing, there was often a contingent of “Jews for Jerry” integrating their own version of Jewish practice with the rituals of Deadheadism, including wandering around, following their Moses-like leaders to an unknown destination, often in search of a “miracle” in the form of a concert ticket or manna from heaven — a decent meal.

Today, “Jews for Jerry” lives on as a Facebook group and has given birth to annual events such as “Blues for Challah” at the Isabella Freedman Jewish Retreat Center in the Berkshires, an ingathering exploring whatever Jewish influences participants can find in the music and culture surrounding the Dead. (Full disclosure: I presented a session at the second “Blues for Challah” retreat, albeit one focused on Bob Dylan, whom the members of the Dead themselves worshipped as a prophet and as a provider of songs). A similar gathering, “Unleavened Dead,” took place at a Jewish summer camp outside St. Louis last summer.

While no one has yet found enough connections between Judaism and The Grateful Dead to make for a full-length book, in the manner in which Jewish-inspired singer-poets including Leonard Cohen and Bob Dylan have easily lent themselves, The Grateful Dead have clearly touched something in Jewish fans and scholars to make for a cottage industry of community and speculation. Even the rabbi of the first Jewish congregation I belonged to as an adult — a Reconstructionist community in Vermont — was fond of working references to The Grateful Dead, from his days following the band, into his Torah lectures whenever possible (much to the annoyance of some of his congregants). And there are, indeed, a number of touchpoints to make for a kind of parallel Jewish history of the Dead:

While the aforementioned Hart is the only Jewish member of the band, a coterie of personnel essential to the musicians’ career have been Jewish, including managers and business agents Lenny Hart (his father), Danny Rifkin, Ron Rakow, Hal Kant and, perhaps most important, concert promoter Bill Graham, whose support in booking them into the Bay Area venues where they got their start gave a leg up on their career. 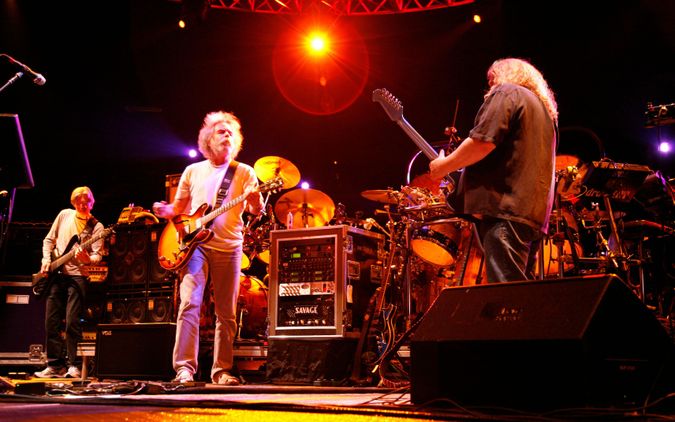 In The Grateful Dead’s 30-year-career, the band recorded only about a dozen studio albums. These formed the basis for the group’s live performances, which were The Grateful Dead’s raison d’être. The manner in which the basic tracks on their studio albums turned into their legendary group improvisations are relatively analogous to the role that the Written Torah and the Oral Torah have played in the evolution and perpetuation of Jewish law and wisdom.

The Grateful Dead’s policy since the very beginning of allowing fans to tape their concerts, even setting aside taping areas and permitting bootleggers to plug right into their sound console, merely served to encourage the dissemination of The Dead’s “oral tradition,” as if they were religious disquisitions by Hasidic rebbes.

When the band was still mostly a Bay Area phenomenon in the mid to late 1960s, they were heavily involved in community action, playing free concerts and taking part in efforts to feed and house those in need, in acts of what modern Jews might term tikkun olam. repairing the world.

The kind of “noodle dancing” one typically witnesses at a Grateful Dead concert has often been likened to the active shuckling seen in enthusiastic Jewish prayer.

While The Grateful Dead never played Israel, Hart has performed there for a sizable contingent of Dead fans. The Dead, however, did go down to Egypt, where they performed a three-night stand at the Great Pyramid of Giza in 1978. Many were hoping they’d cross the border to perform a similar residency at the Dead Sea.

One of The Grateful Dead’s best-known songs is “Uncle John’s Band.” According to songwriter Robert Hunter, the Uncle John of the title is musician, ethnomusicologist and filmmaker John Cohen, who was born in Queens and raised on Long Island, and who was one of the original folk revivalists, forming the New Lost City Ramblers with Mike Seeger

Mandolinist David Grisman was the closest thing to an unofficial member The Dead ever had. He contributed the signature mandolin part on the studio version of the popular Dead song “Ripple.” Garcia’s lifelong friendship and musical collaboration with Grisman, who played on The Grateful Dead’s “American Beauty” album as well as on duet albums with Garcia, led Grisman — who has also enjoyed a successful duo career playing klezmer with fellow mandolinist Andy Statman — to play “Shalom Aleichem” at Garcia’s funeral. Grisman sideman Rob Wasserman went on to play bass with Bob Weir’s post-1995 music efforts, including his band, Ratdog.

Bob Weir’s 1972 album “Ace” opened with the song “The Greatest Story Ever Told.” Played a total of 271 times by The Grateful Dead, the Weir/ Hunter/ Hart collaboration features surrealistic images of the biblical personalities of Abraham, Isaac, Moses and Gideon, in what today reads like a cut-rate Dylan pastiche.

The group’s 1975 album, “Blues for Allah,” was intended as a eulogy to Saudi Arabia’s peace-minded King Faisal, who fell victim to an assassin’s bullet. Hunter claimed that King Faisal was a fan of The Grateful Dead. The album includes an instrumental song, “King Solomon’s Marbles,” and the original LP featured the printed lyrics of the title track in four languages: English, Arabic, Persian and Hebrew.

While there are numerous stories about how the group happened upon the moniker The Grateful Dead by chance, the term itself stems from folktales in many cultures about dead people repaying kindness to those who pay for their burial. These tales all closely align with the Jewish commandments of Livayat HaMet and Chesed shel Emes to watch over the dead and with accompanying a dead body to the grave.

One of the greatest Grateful Dead concerts of all time was the Summer Jam at Watkins Glen in upstate New York in 1973, which featured just two other bands besides The Dead — the Allman Brothers Band and The Band. The festival set an all-time record for attendance. The crowd numbered 600,000 — the same number of attendees at the original rock festival, where Moses gathered his tribe to Mount Sinai to receive the Word of God.

Seth Rogovoy is the author of “Bob Dylan: Prophet, Mystic, Poet” (Scribner, 2009). He totally doesn’t get the appeal of The Grateful Dead, and can’t bear to listen to the live album, “Dylan & the Dead.”

The Secret Jewish History of The Grateful Dead