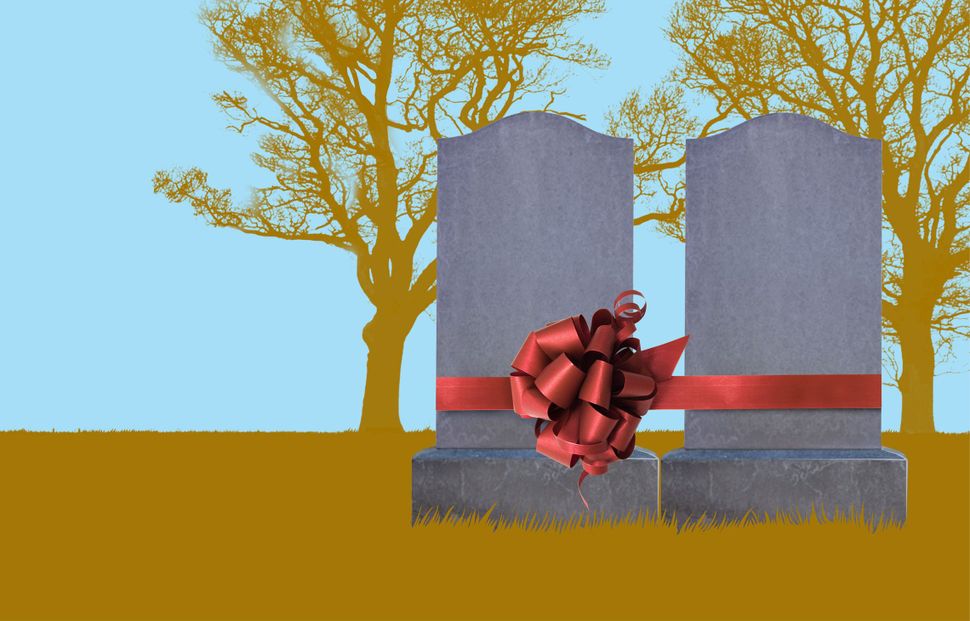 I recently bought my grave because my wife, 10 years my junior and exceedingly practical, has been urging me to decide what I want concerning my ultimate disposal. Debbie has not failed to notice, as I approach my 70th birthday, that time may be nigh. She prefers I be cremated, but I have been insistent on having a final resting place. Eschewing the afterlife aside, there is no good reason, from her perspective, for one to remain intact awaiting some mysterious disposition. I am not able to seriously contemplate an afterlife, but I have a sentimental attachment to my shell and skeleton and would prefer to keep them in a box, awaiting further developments.

I asked to be buried in the Jewish cemetery in Sag Harbor, New York, on Long Island. I’m out here every weekend; the cemetery is 10 minutes from my house, and my son and my friends could easily visit. There is ample parking. Although not observant, I like the notion of resting with my kind, and, in the event of some new wave of anti-Semitism, particularly involving defacement of graves, I’d want to face that with my fellows.

I did not assume there would be any space in the cemetery; everything in Sag Harbor is oversubscribed. I also expected the cost to be prohibitive. To my delight, there was plenty of room and the cost was 100 times less than the down payment for any other property here. It occurred to me that rushing to the beach or waiting to eat a hamburger is more compelling than securing a death place.

Debbie agreed to get me a grave, but she assured me at first that she had no intention of taking one for herself. My guess is that moldering away is not appealing and likely makes her afraid. Additionally, the prospect of being bound to me forever may cause her some ambivalence. “Till death do you part” is the promise, or choice, of liberation.

Therefore it surprised me that she decided, a few days before the sales appointment, to buy two spaces. She would not commit to eventually occupying the second space — but to what other use could it be put? They don’t take dogs; my son has a wife and will likely want separate arrangements. There was no discount in buying two instead of one. I could not account for her decision, but it pleased me. Perhaps she decided to get two plots to give herself a choice down the road. Should I pass first, she may miss me and want to join me underground.

The appointment with the grave salesperson at the Independent Jewish Cemetery Association was scheduled for a recent Sunday afternoon. The plan had been for my wife to go there by herself and get the business done. Hours before the appointment, she asked me to go with her. In our marriage, responsibilities are divided, and dealing with death, taxes, important papers, medical insurance and anything else for “grownups” is ordinarily not something I attend to. I do the food shopping, for example: grill the chops, drive, take out the garbage and select vacation destinations. I think I do plenty, but that may be open to debate. Regardless, “Mommy” was not going to take care of the plot purchases by herself, and I had to admit, her request that I join her was reasonable.

I knew why I’d not intended to go in the first place. Going would require me to squarely face mortality. I would have to take the matter seriously. “This s—t ends?” I was moved to ask. I am adept at pretending that it doesn’t end. I’m in reasonably good health, have no imminent condition waiting to overwhelm me and I continue to work enough to spare myself from having time on my hands. Now this.

We drove over in a showy convertible.

“Do we have to go in this car, looking like typical Hamptonites?” Debbie asked me. Somehow it struck her as unseemly, vulgar. “And please,” she said, “turn the music off before we drive in. It’s disrespectful.”

“And put out that cigar before we get out of the car.”

Of course, I meet death in this car, puffing on a stogie, not a care in the world and in no hurry to arrive at a final destination. The music, too, was defiant.

As we drove through the gate, a woman drove in thereafter, evidently the salesperson. She had a chart in her hands, color coded, indicating what was taken and what was available. An older, working-class New Englander type, red-faced and weather-beaten, she fumbled with the chart.

“Do you want me to show you what’s available or is there a section you like?” she asked. “Available is good,” I said. This was not a selection I felt discriminating about. If I turned out to make a bad choice, I did not expect to rue it for eternity. The great likelihood is I wouldn’t even know I’d made a bad choice.

It turned out I liked the first space she showed us. The area took up less space than a modest double bed. Of course, we would not be stretching out or turning over. The plot faced west, guaranteeing a nice sunset every day, weather permitting. We would be “looking at” the forest, and there was not too much company around, maybe 10 or so others. We’d seen five or so spaces, but went with the first offering. A desire to get this done and get out of there was no small part of my enthusiasm.

My wife took more time deciding on the spot. I waited patiently as she pondered.

“This is nice,” she said. “Kind of sweet.” There was surprise in her tone, and indeed, the space and the cemetery, the feeling of all this, was kind of sweet.

To secure the space, we had to write two checks, one for the plots and one for the construction of a stone border around the plots. There was significant relief in writing the checks, a sense of accomplishment and peace. It did not feel as if we were hastening things. On the contrary: By doing this, we gave ourselves all the time in the world, together, right here.