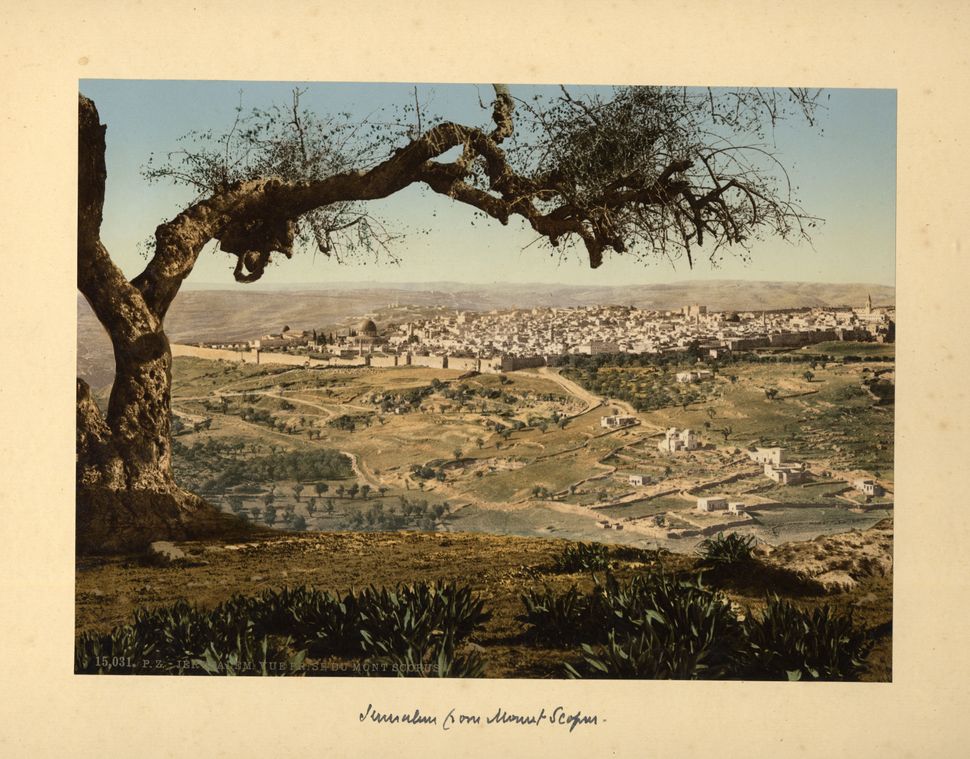 The documentary “1913: Seeds of Conflict,” which airs on June 30 on the Public Broadcasting Service, disputes the idea that Muslims and Jews have always been enemies; it also challenges standard Zionist narratives about Jewish settlement in prestate Israel. Though “1913” is the first major American-Jewish film to take these positions, it is not unique in the Diaspora. French-Jewish filmmakers have released a slew of analogous films in the past 15 years. These include films that show relationships between Jews and Muslims historically or in the present, such as Karin Albou’s 2008 movie “The Wedding Song,” which examines the close friendship between two 16-year-old girls — one Jewish, the other Muslim — in Tunis in 1942 before historical circumstances begin separating them, and Jean-Jacques Zilbermann’s “He’s My Girl,” from 2009, a romantic comedy about a gay klezmer musician and his cross-dressing Muslim lover. French-Jewish filmmakers have also made documentaries critical of Israeli policies and historiography, such as the 2004 movie “Wall,” by Simone Bitton, and “the 2013 film Where to, Israel?” by Camille Clavel, the grandson of Holocaust survivors.

Why haven’t American Jews made films like this before? One reason may be demographic. In France, the majority of Jews are of North African origin and have more shared experiences with Muslims, whereas in the United States, Ashkenazim predominate. The political climate also plays a role. J Street’s exclusion from the Council of Presidents is just one sign of the challenges facing American Jews who might offer critical perspectives on Israel or Muslim-Jewish relations. While American Jews have made a few films that treat similar themes (for example, Anna Baltzer’s documentary “Life in Occupied Palestine” and Stefan Schaefer and Yuta Silverman’s drama “Arranged,” which celebrates the friendship between two teachers in Brooklyn, one frum, the other devoutly Muslim), they have not been widely screened. American Jewish filmmakers have been more likely to celebrate Zionist history than to challenge it, whether in films like Roberta Grossman’s and Nancy Spielberg’s 2014 “Above and Beyond,” about American Jews who fought for Israel in 1948, or in polemical documentaries like the anti-J Street film “The J Street Challenge.”

“1913: Seeds of Conflict,” with its high-profile national airing on public television, is thus a milestone in American Jewish film. Director Ben Loeterman (“The People v. Leo Frank”) explained at a recent screening that his direct inspiration for making the film was journalist Amy Dockser Marcus’s book “Jerusalem 1913: The Origins of the Arab-Israeli Conflict.” But he was also motivated by debates in his family — between one relative who has made aliyah and another who is more hostile to current Israeli policies. Like his French counterparts, Loeterman sought to imagine a time before the current conflict.

“1913” seeks to educate viewers who still believe that Palestine was a “land without a people” before 1948. Like Marcus’s book, it adopts as its foil a 1913 documentary, “Life of the Jews in Palestine,”.) by Zionist pioneer Noah Sokolovsky. That film sought to show the great successes of the Zionist movement. However, as Marcus and others have pointed out, “The Life of the Jews” presented a sanitized picture of Palestine — one that excised non-Jews from its frames. Combining archival footage, re-enactments and interviews with experts (American, Israeli and Palestinian), Loeterman aims to restore what was missing from Sokolovsky’s film.

“1913” portrays Ottoman Palestine as a land of peaceful coexistence. It presents integrated coffeehouses in which Jewish, Christian and Muslim men socialized, and a music ensemble in which they played together. “1913” also shows how residents of Palestine (including Ottoman Jews) viewed the Zionists who began arriving in large numbers in the 1880s. Where Zionist narratives traditionally discuss these Russian olim as coming to a barren desert, “1913” treats them as illegal immigrants who violated Ottoman immigration laws. Loeterman traces the disruption they caused. The film explains that Jews bought land from absentee landlords and then ejected Bedouins living there without offering them compensation.

The film suggests that Ottoman non-Jews were open to Zionists; however, the Zionists brought enmity upon themselves. Loeterman cites Jerusalem’s mayor at the time, Ruhi Khalidi, who stated: “Jews make no effort to draw close to Arabs. They separate themselves… living in closed settlements and reinforcing locals’ fears.”

Loeterman deems 1913 the conflict’s “turning point,” focusing on an incident in Rehovot in which Jewish guards beat an Arab camel driver and the incident escalated. The film suggests that this event fractured previously unified Ottomans into “us” and “them,” Jews versus Arabs.

In many ways, “1913” promises to be a valuable addition to public discussion of the Israeli-Palestinian conflict. It humanizes those who lived in the area before 1917; it forces viewers to grapple with the limitations of Zionist founding myths. Loeterman also makes clear that today’s conflict was not inevitable. At the same time, “1913” overstates the harmony that existed in Ottoman Palestine; it substitutes one problematic narrative with another. For one thing, it cherry-picks the scholarship of its interviewed experts. In a 2011 book, Michelle Campos showed the peaceful relations between members of different faiths, but she did not ignore tensions (“Easter-Passover was a particularly dangerous time as Christian Arabs sang anti-Jewish songs on the streets”). It also presents a local Jew named Albert Antebi as an adversary of the Zionists, confident in his Ottoman identity. Birzeit University Professor Salim Tamari declares in the film that Antebi opposed “the malicious cultural impact of European Jews.” Marcus’s book offered a more nuanced view of Antebi. It showed that his own family was not untouched by anti-Semitism in the empire; Antebi’s grandfather was imprisoned during the Damascus Affair blood libel of 1840. The French-speaking Antebi disagreed with Zionists on particular points but worked closely with them on others; his ambivalence about their project reflected Ottoman Jews’ uncertain status in a changing empire.

“1913” also tags Zionists as solely responsible for bringing disdain upon themselves and upsetting the empire’s “delicate balance.” Gershon Shafir, another of the film’s interviewees, has offered more complex portrayals in his own scholarship. In “Struggle and Survival in Palestine/Israel,” Shafir and Mark LeVine point out that Jewish immigration into Palestine was dwarfed by that of non-Jews from the 1880s to World War I; the area was becoming more “crowded and conflicted,” but not only because of Jews. Furthermore, where “1913” describes the birth of Arab nationalism as a response to Zionist exclusiveness, Shafir and LeVine explain that it was also a result of Ottoman centralization (which caused “great inequality” for Palestinians) and a reaction against Turkification (efforts to make Turkish, rather than Arabic, the predominant language and culture). Loeterman also does not mention that Zionists such as David Ben-Gurion learned Turkish and sought to integrate into the empire.

The choice of 1913 as the conflict’s turning point can also be debated. Shafir’s writings have called attention to the binationalist movement of the Mandate period, which advocated shared sovereignty for Jews and Arabs, with autonomy for each in internal affairs. The eventual failure of this movement was at least as important as 1913. And Jews’ efforts to find refuge after the Shoah — not to mention how the war played out in 1948 — influenced the conflict more decisively.

“1913” reacts justly against the myth that Muslims have always hated Jews. However, it resorts too much to a countermyth, that which Princeton University professor Mark Cohen has termed “an interfaith utopia.” Anti-Zionists have sometimes appropriated this myth to suggest that Muslims were benevolent toward Jews until Zionist disruption.

PBS’s publicity materials promise that “1913” “breaks new ground.” While its narrative is surely not the last word on the topic, the film is likely to spark much debate. Its significance may be in cracking open the door toward a more diverse American Jewish discussion of Israel’s history.
_ Alyssa Goldstein Sepinwall is a professor of history at California State University, San Marcos._