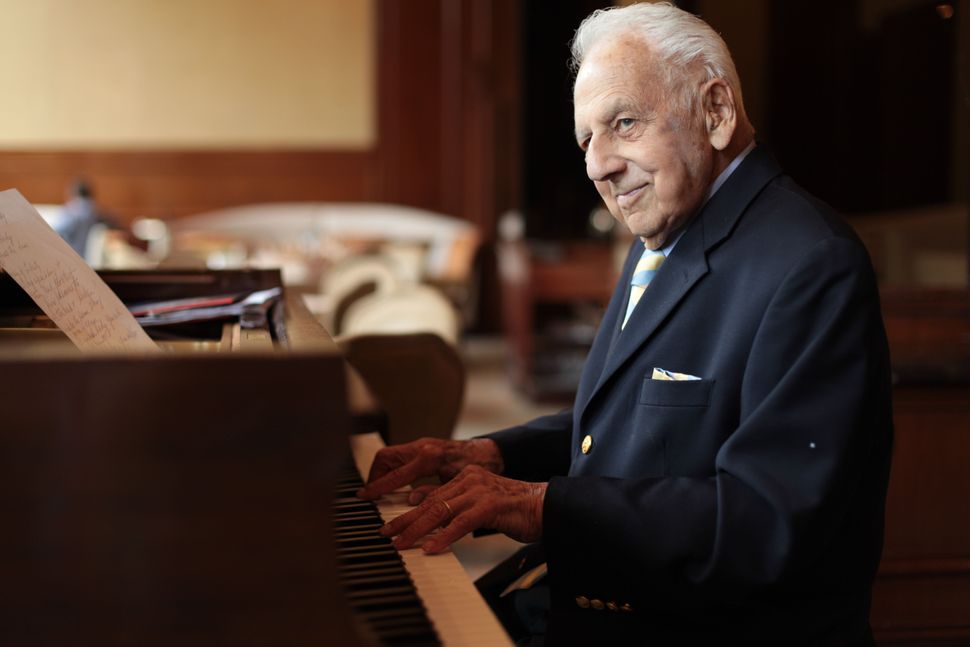 “It’s almost my birthday!” Irving Fields announces, no sooner have I arrived at the doorstep of his Midtown apartment. He gleefully declares that he will be turning “100 years young” in a couple of weeks and then promptly invites us to his birthday party.

And so begins my afternoon with Fields, a pianist who has been making the rounds of society rooms, lounges and cabarets for the last 83 years. As he settles down in front of the video camera, he looks completely at ease. “Hi, I’m Irving Fields.” He flashes a smile at the lens. “I’m 99 years young and I’ve had such a wonderful life. I hope there’s a piano up there when my time comes.” He pauses and looks around expectantly. “What else do you want to ask?”

Fields switches gears easily, slipping into reminiscing about his childhood growing up on the Lower East Side. “I remember my first piano lesson. It was boring, playing scales, no melody,” he said. “Then, one day I wrote a little song myself. I composed something and I began to love music.”

That love — and a whole lot of natural talent — led him to a week long engagement at the Roxy Theatre as a teen, and eventually landed him a series of cruise ship gigs where—at the age of eighteen, making $10 an hour—he traveled to Havana and discovered Latin music. Later, he would create a hybrid of Jewish and Latin sounds for the 1959 album ‘Bagels and Bongos,’ the title of which he came up with while taking a bite out of a lox-and-cream bagel.

Fields glances at his watch about a half hour into our interview, looking suddenly restless. “I think we better go now.” he says. It will take him about fifteen minutes to make his weekly commute to the Park Lane Hotel, where he performs every Friday, Saturday and Sunday from 12-3. His walker is already stocked up with the essentials—the little wire pouch holding a collection of his CDs for sale and a pile of leaflets containing his secrets to longevity, which he will pass out later at his gig. (Some key pointers: “Be a good listener. A lot of people talk too much.” “Eat four hours before bedtime. You’ll digest better.”)

Fields shuffles slowly and carefully down 59th Street, every once and awhile catching the eye of our camera and beaming. He’s dressed to impress: royal blue dress jacket, yellow and blue silk tie and a matching handkerchief placed meticulously in his pocket. “Good for him!” A passerby says, nudging his companion’s attention in the direction of Fields.

His piano waits for him on the second floor of the hotel, a large airy dining room with sweeping views of Central Park. “That’s one of my fans.” Fields says, settling down on the bench and pointing to a man seated at a nearby table, who introduces himself as Ted Ohlstein.

“Irving was a real fixture in New York, in entertaining people.” Ohlstein says. “For those of us who can’t deal with the new music, it really is like going back to a period of elegance of sophistication.” He pauses, looks over at Fields and smiles. “Ah. He’s playing the ‘Moonlight Sonata’ I requested.”

Fields is quick to tell his audience that he can play anything they want, anything at all. He walks around between sets, going table to table with his CD in hand, asking people where they’re from and what they’d like to hear. When one guest asks for something French, he gives her a knowing nod, fingers nimbly knocking out an Edith Piaf standard.

Fields is watched closely by Sam, his favorite waiter, who comes over to remind him that he really should have lunch. And what would he like to eat? Fields responds hopefully, “A margarita?” He gets his wish, settling down at a table alone with his frosty drink and a crab cake—which Sam thoughtfully adds to balance the meal. Seconds later a woman approaches him and requests “What A Wonderful World.”

Fields is only a couple of bites in but without hesitation gets right back up, easing his way back to the piano, and he’s off and running again.