Remembering Frank Kameny, the Moses of the LGBT Movement 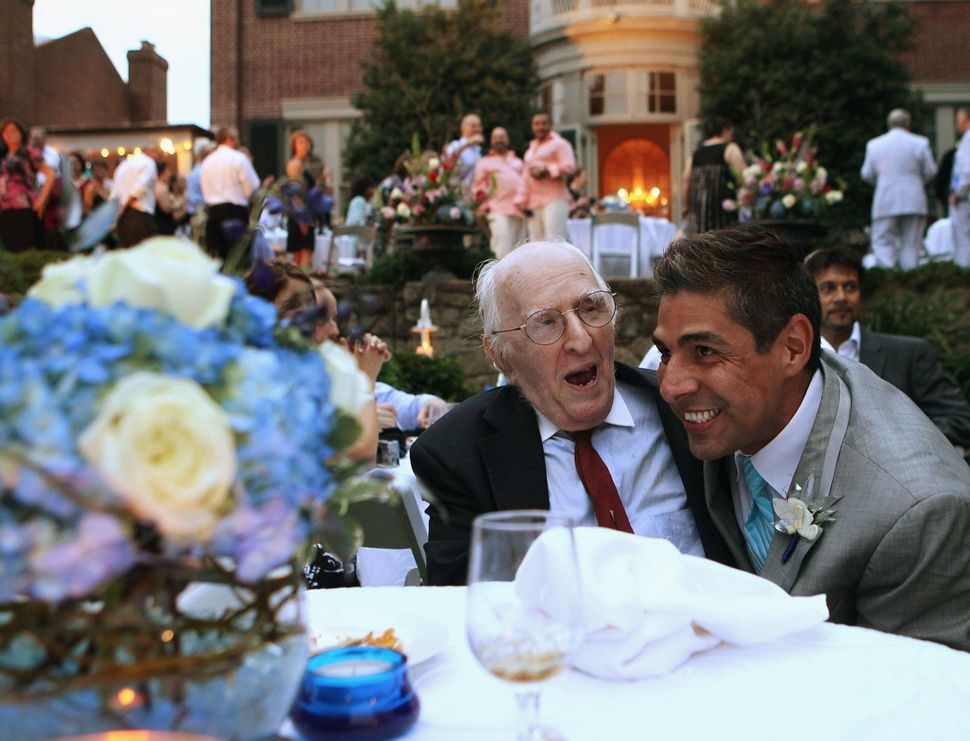 On July 2, a party at the National Museum of American Jewish History kicks off a celebration of the 50th Anniversary of the LGBT civil rights movement at Independence Hall, Philadelphia. A half-century ago, activists from New York, Washington, D.C., and Philadelphia protested for equality each Fourth of July from 1965 to 1969 in front of Independence Hall and the Liberty Bell. These demonstrations, known as Annual Reminders, were co-organized by the American Jewish firebrand Franklin Edward Kameny (1925–2011). In 2006, Yale Law School professor William Eskridge told the Associated Press that Kameny was the “Rosa Parks and the Martin Luther King and the Thurgood Marshall of the gay rights movement.” Kameny’s fellow LGBT activists simply called him Moses.

A Harvard PhD in astronomy and World War II combat veteran, Kameny was fired in 1957 from a job with the United States Army Map Service on the sole grounds that he was gay. Unlike thousands of civil service workers dismissed for the same reason, Kameny fought back. Over a decade earlier, as he told CNN, he had earned a combat infantryman badge for having “dug [his] way across Europe slit trench by slit trench, practically.” With comparably shallow protections from enemy fire, Kameny devoted the rest of his life to advancing fearlessly, political battlefield by battlefield. Working full-time to advance gay rights, Kameny accepted a lifetime of penury. In middle age, with long locks cascading from a balding dome, he resembled a 19th century scrivener, a professional writer which indeed he was, as “Gay is Good: The Life and Letters of Gay Rights Pioneer Franklin Kameny,” published last fall, proves.

His mother in Richmond Hill, Queens, had complained when he chose his professional field, “What kind of job is astronomer for a Jewish boy?” She was even less enthused when he declared his plans to reform society’s view of LGBT people by activism and letter-writing. He appealed his dismissal from the civil service all the way up to the Supreme Court, which in 1961 declined to consider the case. Kameny v. Bruckner was the first gay rights case brought to the Supreme Court. In 1961, he cofounded the Mattachine Society of Washington, a gay rights advocacy organization which picketed the White House, the Civil Service Commission Building, the State Department, the Pentagon, and Philadelphia’s Independence Hall starting in the mid-60s.

Kameny’s thousands of protest letters range in tone from serious arguments to biblical lamentations. Addressing public officials and media figures, he frequently compared Jews and gays as minorities deserving comparable respect and rights. In his petition to the Supreme Court, Kameny noted: “In fields of anti-Negro, anti-Semitic, anti-Catholic, and other prejudice, the government has indeed recognized, and is playing fully and admirably, its role as a leader of changes in attitude. In regard to the homosexual, the government is following—and following abjectly—an example of prejudice of the least admirable kind, with no effort to change its own attitude, much less to stimulate changes of attitude elsewhere.”

In a May 1961 letter to John F. Kennedy – which would go unanswered like most of Kameny’s missives to the Kennedy White House – he described the “nation’s homosexuals – a minority group in no way different, as such, from the Negroes, the Jews, the Catholics, and other minority groups.” That year he also addressed the chairman of the Civil Service Commission: “The minority group to which I refer is our nation’s homosexuals—a minority in no slightest way different, as such, from other minority groups, such as the Negroes and the Jews … There is not one single argument which can be advanced against the employment of homosexuals which does not have its parallel in the invalid arguments of segregationists, anti-Semites, and the like…Your commission’s treatment of the homosexual is not significantly different from the fanatical southern racist’s treatment of the Negro; from the Afrikaner’s treatment of the South African native; or (short, possibly of the ovens and gas chambers) from the Nazi’s treatment of the Jew—and with no more justification than any of those groups has.”

Faced with continued silence from the Kennedy White House, Kameny wrote chidingly to presidential adviser Theodore Sorensen in June 1963: “We are sure that were the NAACP to write to you in regard to problems of the Negro community, or the B’nai B’rith Anti-Defamation League, in regard to problems of the Jewish community, prompt, meaningful, constructive answers would have been forthcoming.”

Paying scrupulous attention to every case of unjust media coverage, Kameny methodically wrote to offenders, including the editors of Science News Letter in March 1965: “To say, as your headline does, ‘Homosexuals Can be Cured’ is like saying ‘Jews Can be Converted.’ Left unanswered are the basic questions involved in the right of a human being not to be forced to be like everyone else, and to be free of pressures to conform just for the sake of conformity.” To the editors of The Christian Century in April 1965: “Constant pressure upon the homosexual to convert to heterosexuality is as much resented – and properly so – by the homosexual, as is pressure to convert to Christianity resented by the Jew. Each has the moral right to pursue his own way of life as long as he does not cause hurt or harm to others – and the homosexual does not – nor seek to impose his way of life upon others unwilling to accept it – and the homosexual does not.”

Nor were foreign opponents spared, as the UK parliamentarian Sir Cyril Osborne found after speaking in the House of Commons against a British gay rights bill. Kameny wrote in June 1965: “There is but a short step from prison sentences for homosexuals to gas ovens for Jews, and amazingly little difference between Osborne and Hitler.” Back at home, he wrote to CBS in November 1966 about a forthcoming TV news program on gay Americans: “I am sure that you see the similarity between the charges of a ‘homosexual mafia’ and the charges of a ‘Jewish conspiracy,’ which one hears endlessly from anti-Semitic sources. Both charges are a discredit only to those making them and to those believing them.”

Kameny reserved some of his greatest scorn for pop culture pundits such as the gossip reporter Rona Barrett (born Rona Burstein) who in July 1969 earned a philippic for complaining that gays were too visible in Hollywood films: “The Ku Klux Klan finds Negroes distasteful; the American Nazis find Jews distasteful. That is the company in which you place yourself, although I am sure that you have not considered it in quite that way.” In January 1974, he addressed one of several letters to the advice columnist Ann Landers (Eppie Lederer, born Friedman) about what he considered her backward views about LGBT civil rights: “You have placed yourself in a class with racists and anti-Semites, with the Ku Klux Klan and the Nazis, and with the worst and most offensive elements of societal prejudice and bigotry. The psychic destruction which you have wrought upon countless homosexuals is not less than the physical destruction wrought upon blacks and Jews by the lynch mob’s noose and the Nazi’s gas oven.”

Did such rhetoric work? Today Kameny’s papers and memorabilia are in the Smithsonian Institution, his Washington, D.C. home has acquired landmark status, and a street has been named after him in our nation’s capital. Due in part to his labors, the US civil service and U.S. military stopped banning LGBT people, the American Psychiatric Association stopped considering homosexuality as a pathology, among other reforms. Organizers of this year’s Independence Hall festivities have it right; although he did not live to see the Promised Land of marriage equality or basic rights such as nationwide housing and employment protection for LGBT citizens, Kameny was indeed Moses.

Remembering Frank Kameny, the Moses of the LGBT Movement