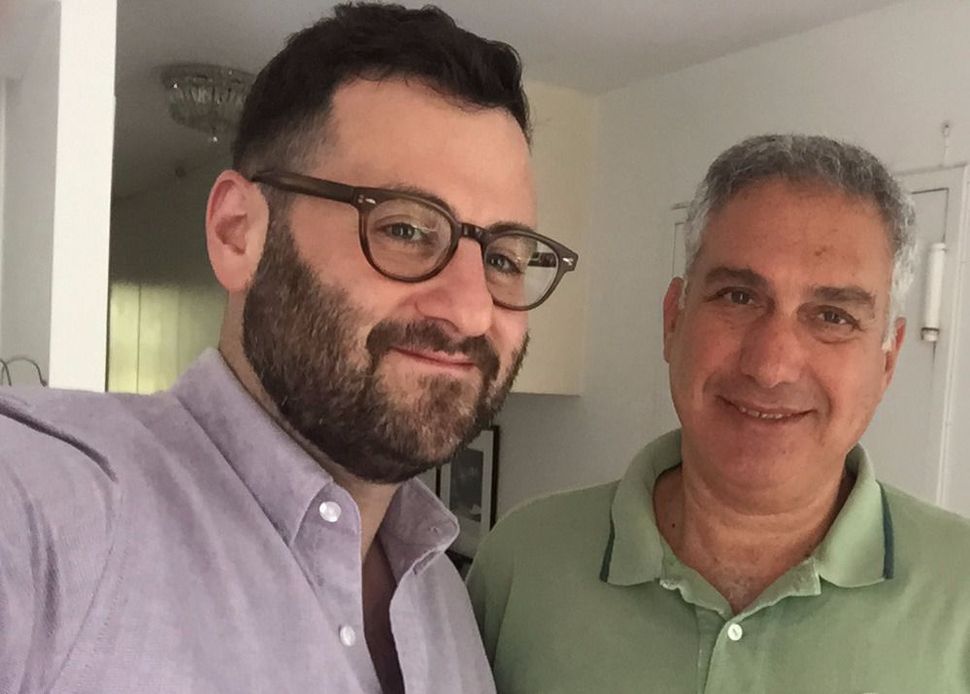 Bob Morris grew up on Long Island with two larger-than-life parents, Joe and Ethel Morris. In 2002, after years of illness, his mother died. Four years later, after a few good years, a few bad ones and then, essentially, surrender — there was a halfhearted suicide attempt — his father died, too.

In a very sweet and very funny 2008 memoir, “Assisted Loving,” Morris — a writer and journalist who frequently contributes to The New York Times’ style section — recalled those good years with Dad, the bond they forged as perpetually single son and newly widowed dad searched for love. His new book, “Bobby Wonderful,” is equally thoughtful but much less joyful. It’s Morris’s account of both parents’ deaths, and his consideration of whether he gave them the attention they deserved in their final days. Recently, Forward contributor Jesse Oxfeld — who contributed a fatalistic observation to the prologue of “Bobby Wonderful” — sat down with Bob Morris to discuss his book.

Jesse Oxfeld: This was a lot heavier than I was expecting.

Bob Morris: It’s not a laugh riot. I was challenged to write a book that inspired people to look for ways to amuse themselves in that situation that they were all facing. Writers get to do that, because we get to idealize a situation, make it beautiful, find what’s funny in it. My father takes six Ambien, leaves a suicide note. We get to the emergency room, and [my husband] Ira says, “Six Ambien? That’s what I take when I get to the Frankfurt Book Fair to get a good night’s sleep, Joe.”

I did laugh at that.

If you are living in this situation that is overwhelmingly hard — and there’s no happy ending — the idea is to give people going through it a way to find whatever charm they can. And I did. I mean, I found it in my father.

So you see this as a sort of guide, helping people through the process of their parents dying. I read it as you working through stuff.

Arthur Miller once said, “I write to understand myself better.” It’s not that it’s a guide. I’m honest about the shameful things that I’m thinking and doing. The fact that, even at this moment of mortality, I still wanted to know if I can leave the hospital on Long Island and get to dinner on time in Manhattan. It’s my specifics, but everybody has things that they’re conflicted about. Guilt is a universal solvent.

The book is flooded with guilt.

In mourning, there’s a tremendous disconnect in that what society expects you to do is be mournful, when you really are so happy that these sick and alien people, who have been miserable and have made you miserable, are gone. And that’s what happened with me. My father dies; we’ve been mourning him a year while he’s sick. He wanted out, he finally got his way. It was a very happy death. 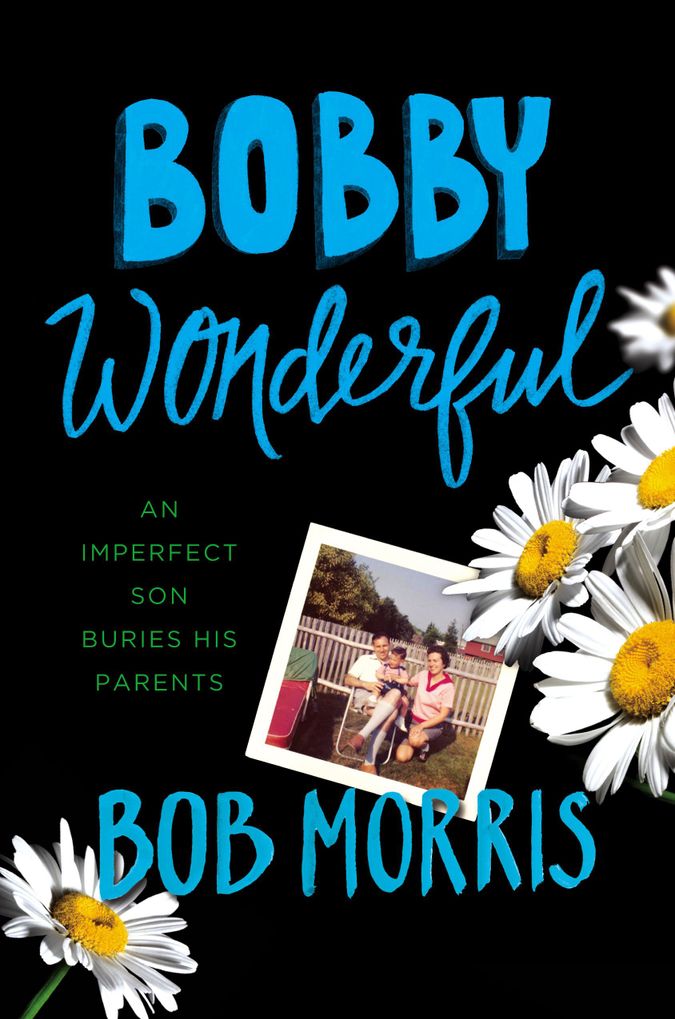 That final scene also, by the way, had me crying a bit as I was reading it.

See, you got your money’s worth. But society expects you to just be miserable. When my dad died, we had the funeral. The rabbi sang, off-key, his favorite song, “All the Way,” and within a few days I just wanted to go file another Times column. He died, and three days later it was Father’s Day, and I had a perfect 800-word column.

It’s interesting, the interplay of that Jewish pragmatism and Jewish guilt.

I think this book is trying to give people permission to get over it. But I’ll tell you one thing that I do think is probably a huge guilt thing, Jewish or not: the idea of being present for parents who clearly need you and want you — and still maintaining your own life, your own quality of life. They don’t have a quality of life, really. They don’t have anything to do. And when they love you to death, literally, like your parents love you, and like mine loved me, there’s tremendous guilt in not being there all the time. I think I did my best. I figured out, from a selfish point of view, what I could get out of it. Not that I was taking notes when this was happening, like Nora Ephron.

No. But I learned to play piano better, because I knew my father wanted to sing with me. And I figured out drives that we could take, that I loved, on the North Shore of Long Island, which is quite beautiful. And I had a good time. I mean, half of our times were good times. Did that help with the guilt that I wasn’t there all the time for him when he was asking me to spend eight hours a day? No. But it was something.

But my pop psychology remains that you worked through your mother’s death and your father’s singlehood in the last book, and now you’re working through both of your parents’ deaths in this book.

There’s a terrible scene in the book where we’re sitting in the hospital with my mom, and she’s been sick for 10 years, and you know, just a wreck. And she’s lying in this hospital bed for days and days, and I talk to a nurse who says, “This is what I usually see when somebody’s really about to go,” and mentions palliative care and a morphine drip. I said to my brother, “I think this may be the time to really just help ease Mom out.” And my brother said to me: “Why? Because it’s convenient for you?” That was, I thought, the most shocking thing ever — and it was terribly right at the same time. I was not wanting her out of that hospital, possibly with serious brain damage. Five years of serious illness is enough. But we don’t know that she really wanted to go.

As horrible as it must have been to get the call that your father had tried to kill himself, it also eliminated that anxiety of: “What does he want us to do?”

Oh, he made it very clear. My dad was a very pushy guy. He wanted to make it clear when he didn’t succeed at suicide. Then he was asking me to do him in. Which is really — you can do a whole bottle of Ambien and it’s not going to do the trick. So, do your research.

You did the research, but you didn’t tell him.

I researched it, and then I kept negotiating. “The bas mitzvah’s coming up, your granddaughter’s bas mitzvah. It’ll ruin the whole thing!” And then, “Oh, it’s your birthday coming up, and so you want to go back to Palm Beach.” Because do I want to be the son with the plastic bag and the helium tube? Not really. Would I have done it if it went on much longer? Yeah, I would’ve done it. I would’ve done it because I had some courage, after reading about how other people had done it.

It gave me permission. That’s what I want this book to do. Not permission to off your parents, but permission to feel anything and laugh, and also look for, God forbid, the silver lining in this. How do you grow? How do you become a deeper person?

Do you think your parents would have liked the book?

Yes. First of all, you make very clear that your father kvelled over everything that you wrote and did. And second, it’s incredibly loving; it shows incredible devotion to them.

Well, my father loves attention, so maybe. My mom was pretty shy. My father liked to control a lot, and so I’m not sure how he would feel. I’m worried to death that somebody will take issue, but what am I going to do?

What are you going to do?

You have to call it as you see it, and I just hope that there’s a catharsis. That little catharsis that you had is — I’m getting that response, even from some of the critics. There seems to be a lot of crying. And I think that’s a compliment. Or else people are mad that the book is $25 and a waste of their money.