Looking Back at ‘The Bridge’ and Germany’s Lost Generation 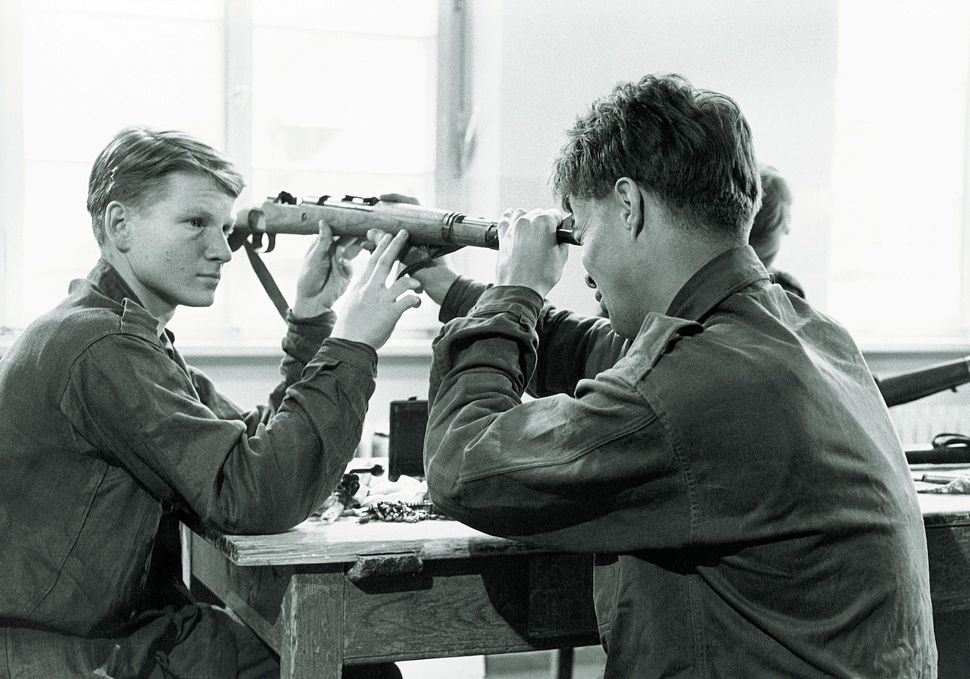 A View From the Other Side: ‘The Bridge’ was nominated for an Oscar and received the Golden Globe for 1959’s best foreign film. Image by Criterion Collection

If movies have taught us anything, it’s that the legacy of World War II is many times bigger and more varied than we thought – no matter what we had thought. Each year, documentaries are unleashed that limn another heretofore dark corner of the Holocaust, or the Jewish refugee experience, or an ambiguous Nazi pathology, while ordinary feature films have exploited every imaginable square inch of the war’s terrain. (Consider how far afield we are when you think about the long-standing and still-growing subgenre of Nazi zombie films.) It’s becoming increasingly hard to believe that we’re talking about only eight or nine years of history all told. Haven’t we heard it all yet?

Well, what about how the Germans felt? It’s a nettling, controversial question pressed by the lavish new Blu-ray from The Criterion Collection of an all-but-forgotten 1959 film, Bernhard Wicki’s “The Bridge.” Nominated for an Oscar in its day, as well as netting a Golden Globe and a best foreign film nod from the National Board of Review, Wicki’s gut-wrenching war film with Germans as the heroes was the first German film since the war to get a broad international release. But then, it vanished down the rabbit hole of moral neglect. As “witness culture” coalesced in the 1960s and ‘70s, and pop culture’s priorities realigned (comedies about Nazis arrived for a while and then left), there seemed to be little appetite to wonder how the impact of the war years affected Germans, and Wicki’s heartfelt stunner became cinema non grata.

It’s generally conceded that German cinema was an enfeebled and shame-scarred thing until the emergence in the mid-‘60s of the New German Cinema of Werner Herzog, Rainer Werner Fassbinder, Wim Wenders, Volker Schlöndorff and others— which in its quest for modernness all but avoided the topics of war; genocide; volkisch, or nationalist, ideology, and National Socialism. But actually, Germany never stopped manufacturing cinema. Its dire reputation stemmed merely from the fact that the German films of the late 1940s and ‘50s, however popular at home, didn’t travel terribly well. The Holocaust was naturally shunned as subject matter, but the legacy of Nazism was tackled with some frequency, with no narrative attempt at rationalization or self-exculpation left unexplored. The characters in these films, including “The Murderers Are Among Us” and “The Axe of Wandsbek,” both available on video, were always misled by propaganda, free of blame, horrified to find out what other Germans had been doing and often cornered as victims themselves.

“The Bridge” was different, as veteran filmmaker Volker Schlöndorff states on the Criterion disc’s supplements: It’s a generational testament. A rather superbly executed antiwar saga, Wicki’s movie hones in on a small village’s teenage boys at the tail end of the war – seven of them, covering the spectrum between rowdy hedonists and nerds and rabid proto-Nazis. Most of the village’s adults, even the local party leader, are all weary and cynical about National Socialism, a problem, it is implied, brought about by everything masculine in German culture. (While the mothers are wracked with worry for sons already in combat and eligible for the draft, the fathers are generally corrupt and indulgent blowhards.)

Personifying the lost generation that grew up with Hitler and was doomed as a result, the boys in question are caught in the middle, responding to the Wehrmacht’s last-ditch draft with a naive yen for soldierhood even before they’re over their first high school crushes. The machinations of the tale from there on in are mercilessly ironic: With one dumb day of training completed before being called to face the encroaching Allies, the boys join a grown-up army of liars, cripples and deserters, none of whom believes the war is worth fighting. Rerouted by a squeamish officer to pointlessly guard the bridge to their own hometown, the seven friends take their task too seriously and defy the official orders (that were intended to minimize conflict) by haplessly engaging with Allied tank squads and making things infinit- ely worse. 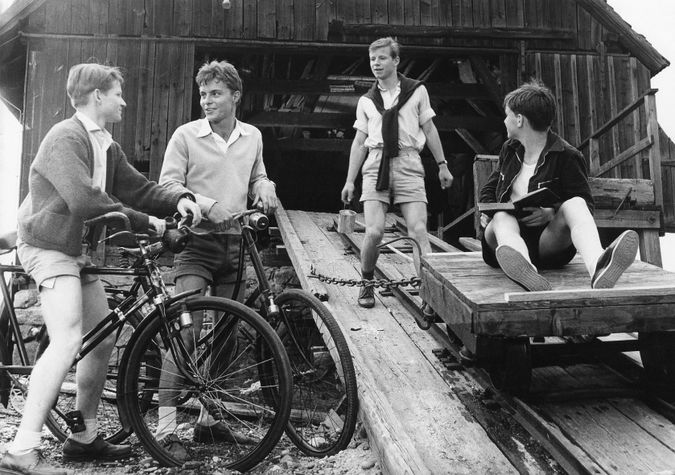 A View From the Other Side: ‘The Bridge’ was nominated for an Oscar and received the Golden Globe for 1959’s best
foreign film. Image by Criterion Collection

Shot in pearly black-and-white with a restless and observant camera, Wicki’s film is filthy with potent images; the boys standing on the fog-laden bridge after trucks of soldiers had just scrambled past them to escape is a vision that sums up the entire film’s thrust, without a word spoken. Of course, nothing ends well. This was the era of the pathological antiwar film, from Robert Aldrich’s “Attack!” to Stanley Kubrick’s “Paths of Glory,” David Lean’s “The Bridge on the River Kwai” and Kon Ichikawa’s “Fires on the Plain,” when the essence of war, not merely its tragic results for individuals, was seen as absurd and maniacal, its evil derived not from the enemy but from your own bureaucracy, officer class and nationalist thinking.

A German film in this context would seem to have a lot of grist for its mill, and “The Bridge” doesn’t miss any opportunity to lash out against the culture as it was. But therein lies the rub. A swamp of questions helplessly arises. How do we read such a film? Did Germany have a right to its own measure of self-interrogation in 1959? If not, how should German culture have dealt with the history?

One could hardly be blamed for looking askance on nearly any German address of Nazism and the Holocaust made within the life-spans of those responsible; whatever tack is taken, you could find efforts at excuse or resolution or deflection in there somewhere. Because it focuses on children, “The Bridge” comes with a built-in poignancy. But is it an evasion? War was indeed hell – but is it for the Germans to say? Can we take a WWII film seriously that posits only the Germans as their own victims and makes absolutely no mention of their other victims? Of any race? Is there room only for guilt over what the Germans did to their own teenagers?

Or is it too much to ask of a mere movie? Germany’s not alone in this regard; search in vain through the scores of Japanese war films for any hint of guilt over what the Imperial Army did in China. Let’s not even bring up the flag-waving solipsism of American film culture, as we’ve recently seen in “American Sniper.”

It would seem that we as individuals would need to decide for ourselves how moral mass culture has to be, and how long its memory must last. Does responsibility over representation ever fade? Does time ever forgive at the movies? Why, strangely, was “The Bridge” a popular succes d’estime in its age but can now seem dishonest? At the very least, Wicki’s film remains a vital piece of pop history – a necessary act of German self-excoriation, a sociocultural piece of the WWII puzzle we otherwise might have overlooked. But the tearful victimhood at its core may, to some, more than a half-century after the movie’s premiere, still seem very volkisch indeed.

Michael Atkinson is a writer for The Village Voice and In These Times, and author of the novel ‘Hemingway Cutthroat.’

Looking Back at ‘The Bridge’ and Germany’s Lost Generation