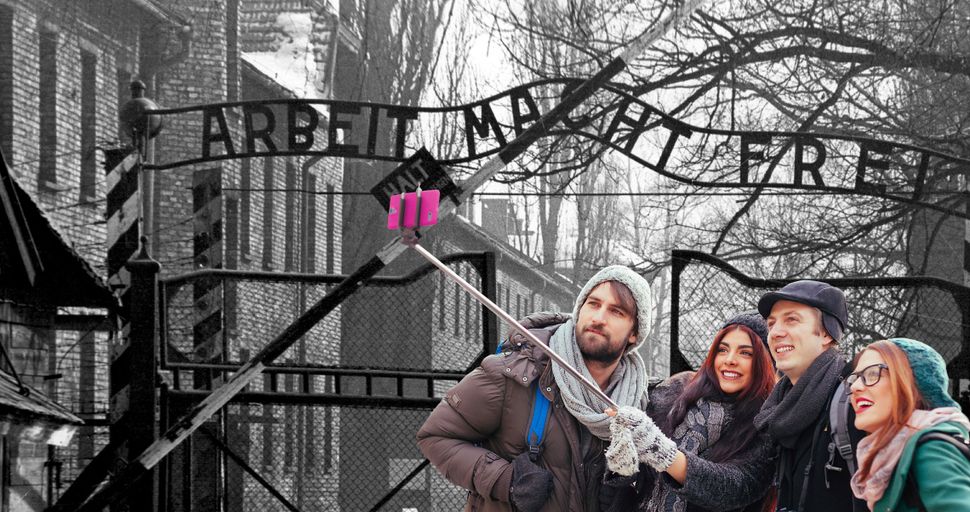 A couple of weeks ago, I stood before a crematorium at Auschwitz-Birkenau and listened to the tour guide talk about the sonderkommandos. The sonderkommandos, he explained quietly, were the prisoners tasked with removing dead corpses from the gas chambers – after the victims had been showered with cyanide and choked to death – and then with hurling them into ovens or onto piles of other lifeless bodies and burning them to ash. The sonderkommandos, who sometimes found their own family members in the heaps, would be killed off and then replaced to prevent their gruesome stories from circulating to others in the camp. I stood there and listened, catatonic and sick to my stomach, perturbed by the lush green fields and flowers growing along the perimeter of the gas chamber.

But what disturbed me just as much was the tourist I saw tiptoeing his way into the ruins of the gas chamber – which at this point looks like little more than volcanic rubble because the Nazis bombed it to erase evidence before they retreated. Selfie stick in hand, this guy was taking photos of himself in the remains of the crematorium where hundreds of thousands of people were murdered.

“Look at him,” I said under my breath to a friend, narrowing my eyes at the sight of this guy. “Is he serious? Someone should go confiscate that stick, now.”

More than 50 locations worldwide have formally banned selfie sticks. A couple of those places are sports stadiums. A couple nightclubs and music festivals, too. But the majority of bans are at museums – including Versailles, the Museum of Modern Art, the Getty Center in Los Angeles and Smithsonian’s National Air and Space Museum in D.C. Those bans are designed, primarily, to protect what’s inside the museums. But what about protecting the sanctity of a place and the feelings of those who visit? There are no selfie stick bans at Auschwitz.

“It’s really hard to ban everything that is somehow disrespectful,” says Thorsten Wagner, academic director for the Fellowships at Auschwitz for the Study of Professional Ethics, or FASPE, a program run through the Museum of Jewish Heritage. Twice a year, FASPE travels to Auschwitz with groups of current and soon-to-be lawyers, doctors, journalists, businesspeople and seminarians to explore how each discipline plays a role in genocide and war.

“You can try to set up rules, which moral sites like Auschwitz do – you can limit people from walking around in bikinis – but there are these gray zones, and I’m afraid that proscriptions and legal ramifications would only very partially deal with the broader culture of how we interact with [these places],” Wagner says. “It’s very hard to isolate the phenomenon of the selfie stick from a much broader theme: What does a certain site demand of me as a visitor?”

As we wrapped our way around the red-brick barracks, past the gallows and through the barbed wire fences, which 70 years ago were electrified and could kill a prisoner on contact, I kept thinking about the people I had seen with selfie sticks. I was disgusted and angry, unable to fathom why anyone would treat Auschwitz – where the Nazis murdered 1,100,000 human beings – like a red carpet in Hollywood.

I had seen the controversial “selfies at Auschwitz” posts (and the explosive criticism that followed) a year or two ago, but the physical selfie stick is an even newer phenomenon that has really taken off only in the last 6 months or so. Selfie sticks, manufactured largely in China, were the gift of the year this past holiday season, according to Bloomberg News — roughly 100,000 selfie sticks were sold in December alone. Using this hot new toy at Auschwitz just struck me as the next level of disrespect – at first impression, these narcissticks seemed to have made the death camp less about the perpetrators and victims killed there, and more about you and me. After a while, though, I slowly began to second-guess myself.

When I left Auschwitz, I couldn’t formulate sentences or articulate thoughts. But over the days that followed, I thought about how my visit to Auschwitz was so much more real than learning about it ten times over in Hebrew school, then again in elementary school, and again in high school and college. It suddenly struck me that in the next ten-or-so years, the last Holocaust survivors — many of whom we’ve had the honor of interviewing, hearing at lectures and getting to know in more intimate settings — may pass. My own children will learn only from textbooks, never from a survivor, and that’s a scary thing.

The need to bear witness to the Holocaust and to its camps is one of the most important factors in keeping the story alive after the survivors and onlookers are no longer here. I began to think that if capturing Auschwitz with a selfie stick is one person’s way of bearing witness and making sure the history never disappears, that must be acceptable. Maybe it’s unfair to cast judgment on how different people behave in these kinds of places, how they absorb it, how they decide to remember it. By the time I had digested my thoughts, I had done a near-180 on this selfie stick issue.

“I’ve seen people process, confront and deal with visiting Auschwitz in many different ways, and these are people I know are serious about being there,” says FASPE’s managing director, Thorin Tritter, who has been to Auschwitz eight times since 2011.

“It’s not what I would choose to do, but we have the technology to now enable yourself, through these selfie sticks, to put yourself into the picture and the memory, to show you were there, without having to ask someone to take a picture of you,” says Tritter. “It’s really hard to ask someone to do that for you [at Auschwitz].”

Perhaps my initial reaction was wrong. Perhaps the tourist who arrives, selfie stick in hand, is not taking the Holocaust any less seriously than the tourist who shows up with a notebook, prayer book, or a bouquet of flowers to leave beside the Death Wall, where naked, demeaned prisoners would line up to be shot in the head. Maybe that person is just trying to document the story in a peculiar yet effective way.

Wagner, however, thinks this may be a dangerous assumption. “I would not be so optimistic as you are,” says Wagner, who has served as an educator at the Jewish Museum of Berlin and a research fellow at the Danish Center for Holocaust and Genocide Studies. He is now a professor at the University of Copenhagen in Denmark, where he lectures on these very issues. He tries to raise awareness about what scholars call ‘dark tourism’ or ‘Holocaust tourism,’ the dramatic rise in interest to go to places of disaster or catastrophe.

“I have students in my class who delve into analysis of Holocaust tourism and have a naïve and optimistic approach, saying people come here so they can make sure they never do this again,” Wagner said. “But I try to nudge them to a more skeptical, cynical attitude, to think about whether this is really the attitude people come with.”

“If people are here [at Auschwitz] to bear witness and they choose to do it that way then I make my peace with it,” he adds, “but I’d challenge whether the bearing witness thing is the prime motivation for people. Although there are people who have a sincere, reflective approach to the place they go to, I’m afraid that this explosion of visitors numbers comes along with a diverse range of interests, so I’d at least be skeptical.”

The Auschwitz-Birkenau Memorial and Museum, located in rural Oświęcim, Poland, now brings in between 8,000 and 10,000 visitors per day, said the museum’s director of communications, Pawel Sawicki, during my visit earlier this month.

So what happens when these phenomena clash – when the booming global tourism industry meets sites that are charred, contaminated, complex and emotional? Each and every one of us who has visited Auschwitz is now a Holocaust tourist in some regard. And in return for seeing Auschwitz as tourists – 70 years later, from a place of safety and even privilege – we’ve now assumed the responsibility of sharing its tales and disseminating its history, whatever the medium, in the most sensitive, considerate way possible.

Alexandra Levine is the Forward’s culture intern. Contact her at [email protected]