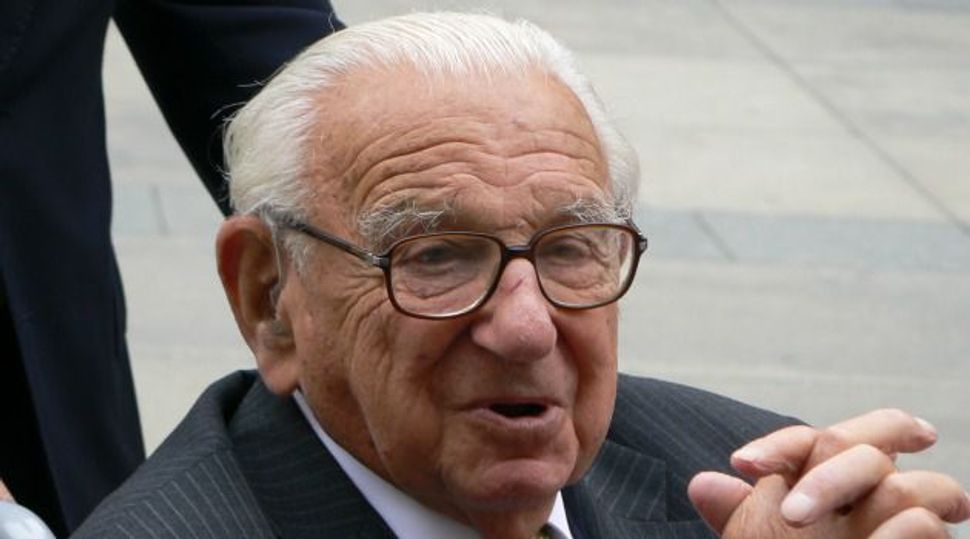 Nicholas Winton, who has died at the age of 106, exemplifies the fact that to do good deeds, years of preparation are not necessary. Effective humanitarian action can be impromptu and seemingly random in origin. Born Nicholas Wertheimer in London in 1909 to German Jewish parents, Winton was a young stockbroker in 1938, planning his winter vacation. Instead of skiing to Switzerland, at the last moment he decided to accompany a friend to Prague where he quickly saw that burning synagogues and other signs of anti-Semitic violence did not bode well for the future of Czechoslovakian Jews. Yet unlike the kindertransport initiative that saved a small minority of German Jewish children from being murdered, no such program had yet been put into place for the youngest and most vulnerable population in Czechoslovakia. So just like that, he decided to create one.

Despite being totally inexperienced and unprepared for such a venture, Winton succeeded in organizing the pre-war rescue of 669 children, the great majority of them Jews. (One preliminary list kept by Winton counted at one point “Jewish 561, Unitarian 52, Roman Catholic 34, without confession 17, 664 (total).” Among the saved children, most of whose families left behind were murdered by the Nazis, were the British film director Karel Reisz, Hugo Marom – a founder of the Israeli Air Force – and the writer Vera Gissing, who would later co-author Nicholas Winton and the Rescued Generation.

The above book is only one of the tributes to Winton in different media, including the drama All My Loved Ones (1999), starring Rupert Graves as Winton; the documentary The Power of Good: Nicholas Winton (2002); and the docudrama Nicky’s Family (2011). Homage was also paid to Winton in the Oscar-winning 2001 documentary “Into the Arms of Strangers: Stories of the Kindertransport” and its accompanying book (2000).

Yet none of this would have been known without the serendipitous decision of Winton’s wife Grete in 1988 to explore the attic of their home, where she found papers about the rescue. She shared these, now in the collection of Yad Vashem, with Betty Maxwell (1921–2013), a French-born Holocaust researcher married to the publisher Robert Maxwell. Due to the Maxwell media connection, Winton’s story appeared in the press, followed by a high-profile 1988 appearance on the BBC-TV show “That’s Life,” hosted by the English Jewish media personality Esther Rantzen, reuniting Winton with some of the children he had rescued.

From then on, celebrity was inescapable for Winton, whom the media dubbed “Britain’s Schindler” even if by all signs he was a far more likable and decent chap than the German industrialist Oskar Schindler celebrated by Steven Spielberg. Innately modest, Winton would always remind people that he himself was no hero since he was never in physical danger. He arranged for homes to receive the children in England, unlike colleagues on the ground in Czechoslovakia who dealt with daily menaces until the Nazi invasion made further transports impossible. Winton repeatedly noted to interviewers that when he asked American authorities to admit some of the Jewish children of Czechoslovakia, they refused. He was utterly convinced of the urgency of the rescue effort, and the need to save lives, even though some religious authorities were not happy that Jewish children were being placed with non-Jewish families. A handful of children also found refuge with the Barbican Mission home, a British evangelical organization whose declared purpose was to convert Jews. For Winton, it was a case of any port in a storm, and history proved him right.

As his daughter by Barbara Winton wrote in “If It’s Not Impossible: The Life of Sir Nicholas Winton,” (Troubador): “One day some rabbis arrived at Nicky’s house to complain about Jewish children going to Christian homes, or even worse, to the Barbican Mission home. Nicky, in calmer moments, understood their concerns, but with the invasion of Czechoslovakia, he was not conciliatory. He told them forcefully that he would not stop placing children wherever he could, and if they preferred a dead Jewish child to a converted one, that was their problem.”

Given the almost random situation which allowed him to do a mitzvah and save many lives, Winton’s motivation was clearly drawn from a profound belief in the value of human life. When he had hip replacement surgery at age 103, Winton was asked by doctors if he wanted to be resuscitated if he died during the operation. He replied forcefully, “Resuscitate me, of course! I want to live!”