Me and the Horse General Custer Rode In On 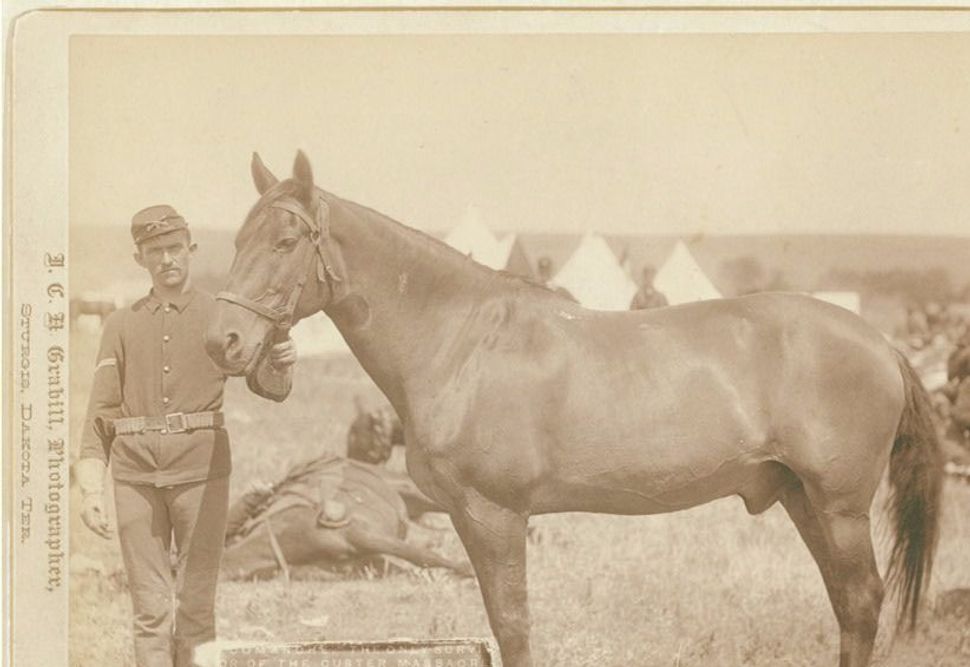 Last night I got one of those stomach-churning emails: I had made a mistake in the big feature I wrote about Jewish slaveowners in Kentucky.

The mistake was this: Towards the end of the piece, I had mentioned an 1871 visit that George Armstrong Custer, the cavalry officer famous for dying at Little Bighorn, paid to my subject, Benjamin Gratz. Trying to be clever, I wrote that the visit took place “five years before Sitting Bull’s men killed [Custer] and the horse he rode on.”

It seemed I’d been trying too hard. The horse Custer rode on, the emailer told me, was the Last Stand’s most famous survivor.

The forces under Sitting Bull and Crazy Horse totally annihilated Custer’s battalion in the Black Hills in 1876. It was the Sioux’s last military victory, and it was unconditional: The only member of the units under Custer’s direct command left living on the battlefield after the engagement, as the popular legend goes, was a horse named Comanche.

I’d heard of Comanche. Comanche is the most famous American warhorse in the not-particularly-long history of American warhorses. Born to a wild mustang mare, Comanche got his name after an actual Comanche shot an arrow in his butt in 1868. After Little Bighorn, the gelding lived out his life under the special protection of the 7th Cavalry. He was barred by military order from being ridden, awarded an honorary rank, and, when he died in 1891, given a funeral with full military honors.

Then he was stuffed and put on display. You can visit him today at a museum in Lawrence, Kansas. (A colleague has been there. She says he’s “nothing impressive,” which isn’t bad for an 120-year-old corpse.)

This alleged error about Sitting Bull and Custer was somewhat destabilizing. I’m no great expert on Little Bighorn, but I used to pretend that I was: In third grade, I had a bit of a Last Stand fixation. Sitting Bull was my Luke Skywalker, Custer my Darth Vader, and I checked out the same book about them at the school library week. Any error is bad, but an error that undermines a 22 years of feeling that I Know A Little Bit about Little Bighorn is deeply undermining.

I googled frantically. Google came through. In point of fact, I learned, despite persistent legend, Comanche wasn’t Custer’s horse, but the horse of another man killed that day, an Irish-born U.S. cavalry officer named Myles Keogh. The horse Custer rode on, named Vic, didn’t survive the battle.

Or maybe he did: Sitting Bull later reported that his nephew had met a Santee Sioux who claimed that one of his horses had been Custer’s.

Anyhow, I let the phrase stand. A lot of trouble for an attempt at cleverness.

Me and the Horse General Custer Rode In On