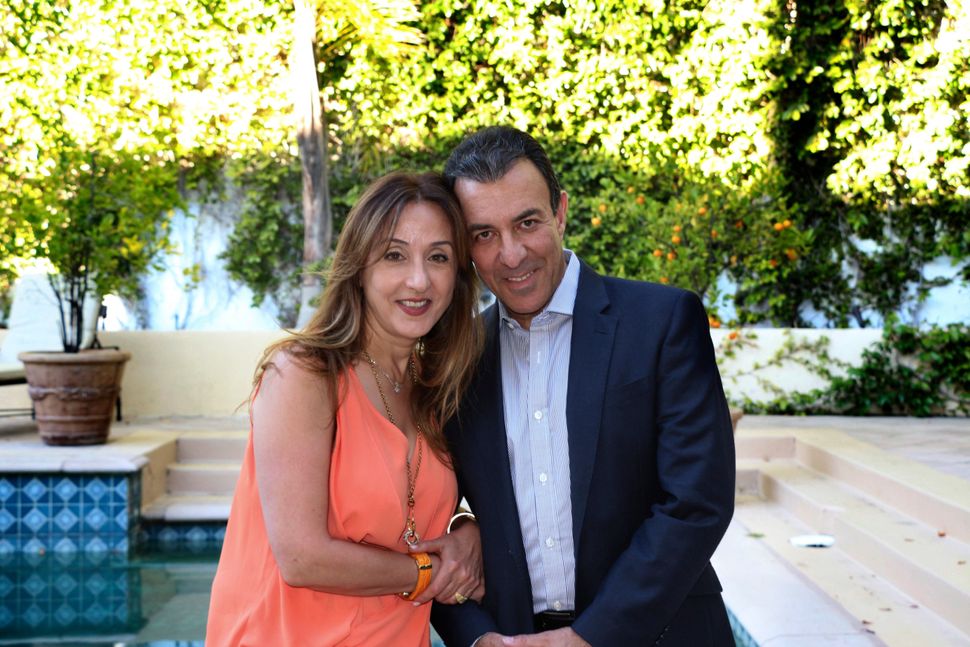 Image by Courtesy of Gina nahai

and her husband, David Nahai, have been living together in Los Angeles for 33 years — 24 of them in their current home in Benedict Hills. Both are of Persian descent. Gina, 54, is a writer and professor of creative writing at the University of Southern California. David is an attorney and environmental activist. Their 15-month-old dog, Gus, is a half Labrador half Dachshund mix rescue that the adult Nahai children have given to their parents. Gina Nahai’s most recent novel, “The Luminous Heart of Jonah S,” was released in the fall of 2014. She has written about Los Angeles’s Persian Jewish community in the pages of the Forward before, and answered the questions below.

GINA: We met in the lobby of the Beverly Wilshire Hotel. My friend was marrying his friend. It was a Persian style big wedding, which means 500-plus guests, two dozen bridesmaids and ushers, dinner served at midnight and no one goes home till the band packs it in at 2 o’clock in the morning. I was talking to an older friend; he was with his younger sister. I was 19; he was 27. The four of us chatted for a while, and then everyone went on their way. A couple of weeks later his aunt called my parents to ask permission for David to call me. This was two or three years after the Islamic Revolution of Iran. Most of L.A.’s Iranian population had only been here for a handful of years, and we did things very much the traditional way.

David takes out the garbage, and if I’m not around he’ll even put a new bag in the trash bin. He’s good with light housework — picking up dishes, making his own dinner, even filling the dishwasher — but he’s the least handy person you’ll ever meet. Once, I asked him to change a light bulb and he said, “Why don’t you hire an electrician?” I swear this is true.

I do everything or pay for someone else to do it. David is very encouraging. He’s also very good at asking me to ask the gardener not to put the sprinklers on more than three times a week.

That’s easy: work, work, work. We’re terrible that way. Weekdays, weekends, morning, noon and night. We do watch a movie or two on Netflix or go to the movie theaters, and we go to dinner with friends once every few weeks.

Its airiness, and the fact that I have all three of my kids’ bedrooms still intact, even though they’ve moved out. I don’t think I’ll ever get used to not being a full-time mom, though I’ve always had a career and good friends and family.

Who was first to get up when one of your children started crying?

Our first two kids were very bad sleepers. When they cried, I was the first to get up, but David was the one who walked them for hours at a time through the night.

Iranian Jews are very big on Shabbat dinner. My family meets every other Friday night at my parents’ house. There’s always my two sisters and me and our children, a couple of aunts and uncles, a friend or two, and often, a stray acquaintance or a newly-discovered cousin my mother has invited.

Have you have ever experienced anti-Semitism?

Anti-Semitism was rampant in Iran, and Jews experienced it in 1,001 ways in daily life. I have a few painful memories of that, but the more shocking, even hurtful instances occurred in L..A. — right there in Westwood, which some call Little Tehran. Most of the shops and restaurants there are owned by Iranian Muslims, and many of them barely contain their dislike for Jews.

What one moment stands out in your mind of when you felt most connected to Judaism?

The summer I spent in Tel Aviv, where I had gone for my cousin’s wedding. I was 14 years old. I met a few soldiers and thought, this is what I want to do when I finish high school.