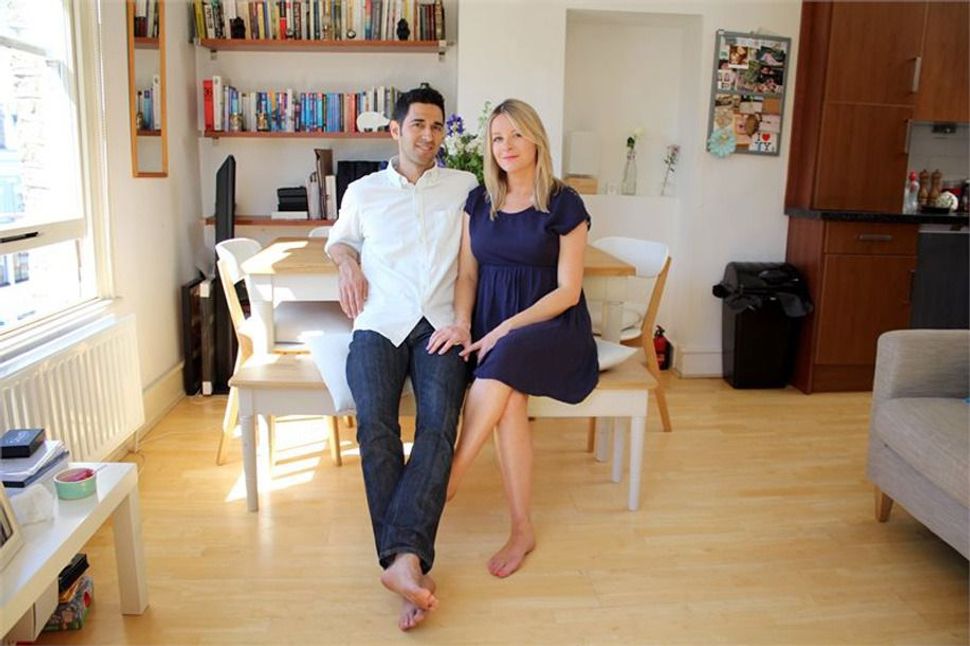 Eytan Bayme and his wife, Cymbeline Kellett, met in New York City, his hometown, and after a whirlwind romance they made the move to London, her hometown. He is 35 and a writer born and raised in Riverdale, a predominantly Jewish neighborhood in the Bronx. She, 34, runs a specialist media-buying agency for the arts world. The two have been living together for two years in the Stoke Newington section of London and are expecting a baby by the end of August. Eytan’s first book, a coming-of-age memoir, comes out the same month.

CYMBELINE: We met when I was living in New York for a few months in the summer of 2012. I came back to London in September and Eytan came to see me a month later. We traveled together to various far-flung places over the next six months, and in March he called his boss from our hotel bathroom in Hong Kong and said he was leaving work and moving to England to live with me.

EYTAN: For the first six months or so I was here on a tourist visa. When I finally spoke to a lawyer about immigrating and told her how long I’d been in London, she said to leave the country immediately or risk getting my settlement application rejected. We had to find somewhere to go in less than a week. It was all pretty dramatic, but I got the visa in the end.

CYMBELINE: I bought the flat five years ago. I’d been saving for a while, and I had already viewed this one to rent a year prior, so when I saw it was for sale I put an offer in. It felt like home as soon as I walked through the door.

EYTAN: I do, proudly.

CYMBELINE: One of the really nice things about living with Eytan is I no longer have anything to do with the rubbish.

EYTAN: I clean dishes, fold laundry and vacuum, sometimes. We have a very small fridge — like an oversize hotel minibar — and assembling the groceries so they fit just right is very satisfying.

CYMBELINE: I cook more. Eytan is the king of the dishwasher. I am not allowed anywhere near it. We have a weekly cleaner for everything else, which is the best thing ever.

EYTAN: Sometimes Cymmie will cut up fruit and put it in yogurt, other times we’ll cook up tofu sausages and baked beans and cottage cheese. It sounded crazy when I first moved here, but it’s grown on me.

CYMBELINE: We go through phases, depending on our schedules. I usually make a morning smoothie with almond butter, berries and various other ingredients for us to share.

EYTAN: Mornings I look after the accounting side of Cymmie’s business. I leave the house at 10 to write in the library until the early evening. Once or twice a week we get tickets to a play or dance performance. London’s theater scene is less expensive than New York City, and a bit easier to navigate. Also, one of the many perks of being married to Cymmie is that there is always an art show or fair to attend.

CYMBELINE: We have breakfast together, and then Eytan goes off to the library and I to my office or on to meetings. If it’s a busy time in the arts world we’ll go to an opening in the evening and then have dinner somewhere nice afterwards. If we’re staying in, then it’s dinner at home, or out locally, followed by a movie on the sofa.

CYMBELINE: Lots of subscriptions to newspapers and magazines. I get a lot free with my job, but Eytan likes to keep up on all his New York titles, so we always have copies of The New York Times, New York Review of Books AND? The New Yorker floating around the flat.

EYTAN: Cabbages. Sometimes we go through two a week. You heard it here: Shred and toss with cider vinegar. It’s the new kale. 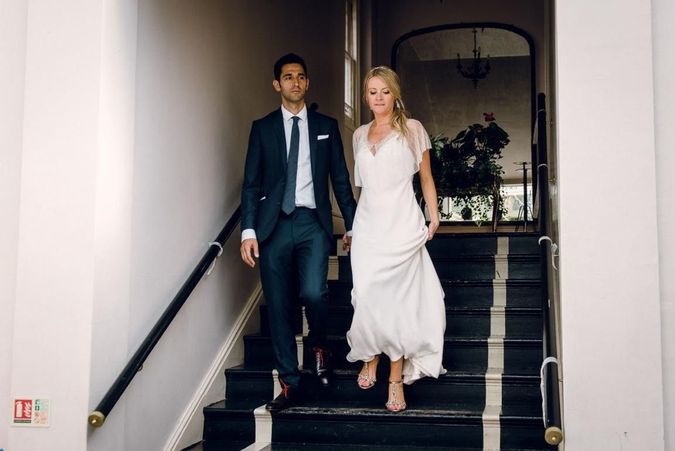 CYMBELINE: We have lots of windows, and we get sun streaming into our living room until it sets — which, in the summer, is very late.

EYTAN: We recently bought a kitchen table with a bench that makes me feel 10 years old whenever I sit on it. Also there’s a Ping-Pong table in the park directly across from our apartment. It’s where I proposed.

EYTAN: My 5-year-old nephew has become quite the ladies man. Cymmie has four sisters, and the night before our wedding he asked for one of them to tuck him in before sleep. I asked him which one, and he said, “It doesn’t matter.”

CYMBELINE: We love Szechuan food, and I got bored of having to go out and find it, so we started making it at home. Eytan also loves the paella I make, especially when I get the bottom really crispy.

CYMBELINE: We’ve been watching a lot of “Broad City” recently.

EYTAN: I think they are the best thing on TV right now.

What is your favorite room in your home?

EYTAN: The dining area overlooking the street and park. Although there’s a phone booth down there, which attracts some sketchy characters.

CYMBELINE: Probably my office. As soon as I sit down at my desk I feel ready for anything. I’ve worked from many different apartments and cities in the last few years, but I’m most productive in this space.

EYTAN: Either a picture of us on our wedding day just before the dancing or a signed photograph of all the original “Beverly Hills, 90210” characters that my friends and I have been passing between us since 2005.

CYMBELINE: My brother gave us a wooden train with letters that spell out our two names that he got made for us in a market in France when we got engaged. It’s very special to me.

What is your happiest or saddest memory in your home?

EYTAN: When I first arrived in the flat after flying in from New York with my three pieces of luggage. I walked in the door and said, “I’m here” and Cymmie hugged me and I knew I made the right decision.

CYMBELINE: Shortly after Eytan moved to London, his sister flew over for the weekend. My siblings and friends were here, too, and we drank lots of champagne before heading out to a local music festival. It felt like everything had fallen into place. 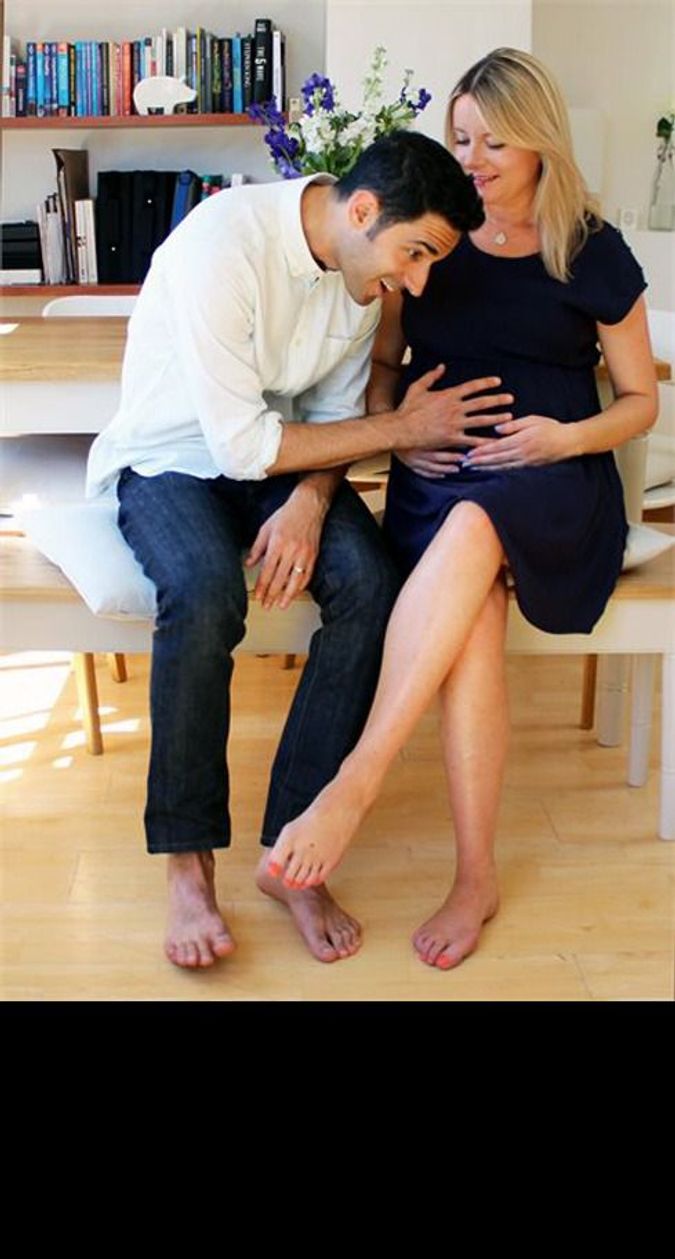 If you could change one thing about where you live, what would it be?

EYTAN: That my niece and nephews lived nearby.

CYMBELINE: Also that my family lived nearby and that we had an extra few rooms so that we never have to move.

If you could change one thing about your Jewish practice, what would it be?

EYTAN: For a long time in New York, my affiliation began and ended with High Holidays and the occasional Friday night dinner at my parents. Since moving here we’ve been practicing Judaism on our own terms. We adopt rituals that are meaningful to us and discuss those that aren’t. It’s difficult to say I want to change something, because it’s constantly evolving in our life.

CYMBELINE: We have a brilliant rabbi named Barry Katz who flew over to marry us last year, so it would be nice if his shul were here in London.

Is there an active Jewish community near you? If not, how do you create your own?

EYTAN: Most weeks I attend an independent shul called the Walford Road Synagogue, and once a month we go to a nearby Masorti congregation called the New Stoke Newington Shul.

What’s one thing you do that defines your Jewish identity?

EYTAN: Helping to make a minyan at my local synagogue on Shabbat. It’s a small 100-plus-year-old shul with Indian, Kurdish, Israeli,? British and American Jews of various denominations. Community is the most important part of Judaism for me, and I’m so touched at how welcoming the people I’ve met there have been.

CYMBELINE: Candle-lighting on Friday night — I take time to send some good thoughts to every person in both our families and everyone else close to me. It’s a nice moment to collect myself and remember what’s important after a busy week.

Does being Jewish distinguish you from others around you?

EYTAN: I try not to let it. For me, being Jewish means committing to a history and trying to make it relevant today. While I may be part of a community that others aren’t, I try not to make a show of distinguishing myself from the world around me.

What one moment stands out in your mind when you felt most connected to Judaism?

CYMBELINE: I spent my first Rosh Hashanah with Eytan’s family in a house near Atlantic Beach in New York in 2013. There was a moment after candle lighting when everyone hugged each other and said Happy New Year. I remember feeling so much warmth and love, and I felt very lucky to be part of their family.

EYTAN: Recently I led the Shacharit services on Shabbat at the New Stoke Newington synagogue. The whole process of preparing the tunes at home to delivering them before the 70-member congregation reminded me of how spiritual hazan liturgy can be. I was really nervous leading up to it, and the only thing that calmed me was singing louder.