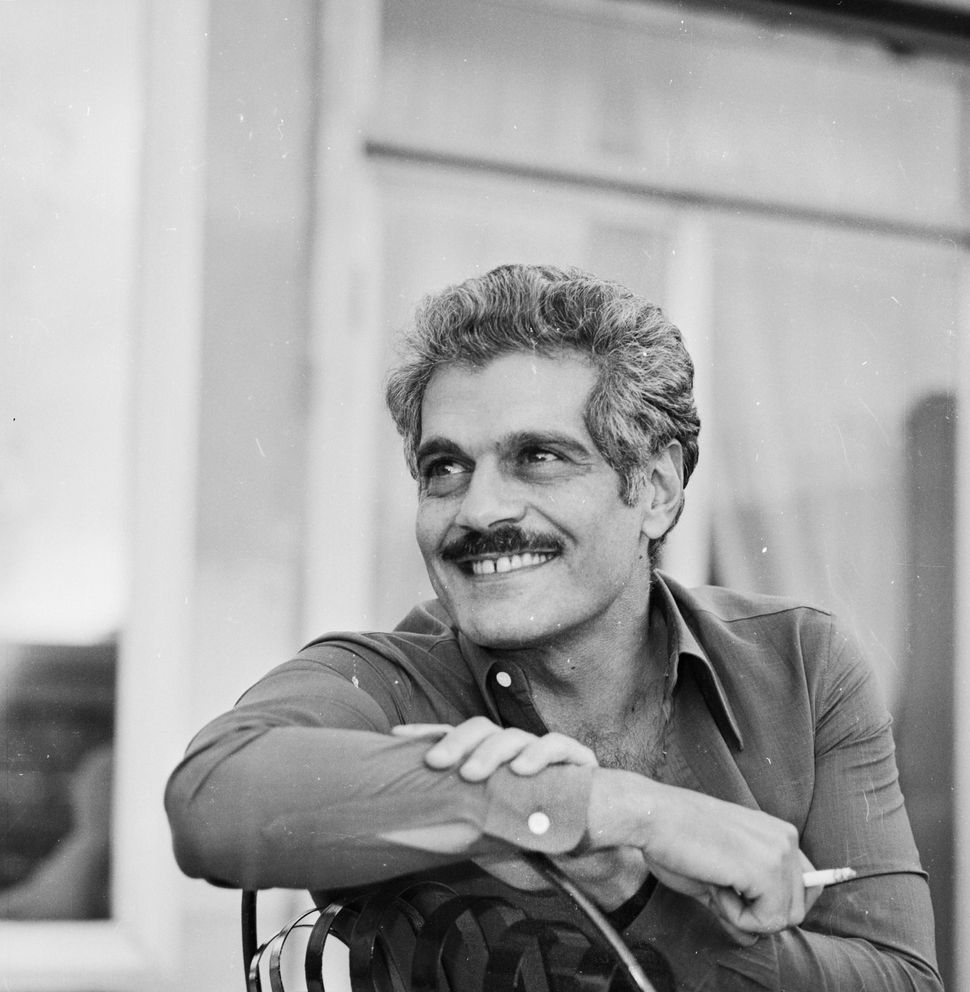 The greatest achievement of Egyptian actor Omar Sharif, who died on July 10 in Cairo, may have been to prove that simple nonchalance may be the best path for mutual tolerance between religions. Acclaimed for screen performances in “Lawrence of Arabia” and “Doctor Zhivago,” Sharif courted controversy by accepting the role of American Jewish gambler Nicky Arnstein, the love interest of Barbra Streisand’s Fanny Brice in “Funny Girl.” (1968). A publicity shot of the couple kissing was released as principal photography began on June 5, 1967, just when the Six-Day War broke out among Israel and its neighbors. The Arab press – as well as some Jewish film fans – were offended by this coincidence. (Little has changed in nearly a half-century; last year the Arab press was likewise offended by a screen kiss in the Luc Besson film “Lucy” between American Jewish actress Scarlett Johansson and Egyptian actor Amr Waked.

Sharif noted about “Funny Girl” in a 1976 memoir: “All the investments in the production were Jewish. The atmosphere of the studio was pro-Israeli and my co-star was Jewish. Most of the newspapers backed Israel. And I was an Egyptian.” Discussing the Omar/Barbra smooch, screen histories such as “Roadshow!: The Fall of Film Musicals in the 1960s” claim that in reaction to a headline, “Omar Kisses Barbra: Egypt Angry,” Streisand supposedly wisecracked, “Egypt angry? You should have heard what my Aunt Sarah said!” Sharif would repeat this gag in interviews, referring instead to an Aunt Rose. His own personal reply to the controversy, acting the role of insouciant screen Lothario: “Neither in my professional nor private life do I ask a girl her nationality or religion when I kiss her.” Decades later, he would state in interviews that more than a screen kiss was involved. For a few months, according to Sharif, the couple had an affair and he was “ready to convert to Judaism for Streisand, but she refused to leave New York, and he didn’t want to live there.” Streisand was also still married to Elliott Gould at the time.

Whether or not the prospect of Manhattan life really broke up the Streisand/Sharif amour, Sharif soon found solace the year after “Funny Girl” was released with the French Jewish actress Anouk Aimée (born Nicole Dreyfus in 1932), with whom he acted in Sidney Lumet’s “The Appointment” (1969). In 2004, Sharif told the French newsweekly “L’Express” that he had moved away from Egypt during the time of President Nasser’s reign: “I didn’t like the military regime and I was afraid that the authorities would pick on my family because I worked with Jews.”

Although sidetracked for some decades by a passion for bridge, and the financially-motivated urge to appear in lesser films, Sharif made a comeback in 2003 with “Monsieur Ibrahim and the Flowers of the Koran,”. As Ibrahim Demirci, a Turkish Muslim shopkeeper in Paris, he shows kindness and generosity to Moїse Schmidt, a small Jewish boy. As Sharif told “J Weekly” in 2004: “I wanted to say that it is possible to love each other and to live together. It’s not some huge message, and it won’t have any effect, unfortunately,” referring to tensions in the Middle East. Despite the familiarity of such onscreen Gallic friendships between young Jewish boys and older French people in Claude Berri’s “The Two of Us” (1967) and Moshé Mizrahi’s “Madame Rosa” (1977) starring Simone Signoret, “Monsieur Ibrahim” proved charming.

So seductive was the influence of Sharif’s character that the boy later adopts Sufi Muslim beliefs. Sharif, born as Michel Demitri Chalhoub in Alexandria, Egypt, was similarly flexible about religious matters. From a Melkite Greek Catholic family of Syrian-Lebanese origins, he converted to Islam to wed the Egyptian actress Faten Hamama. A comparable suppleness only gradually became evident in his acting style. Unlike the woodenness of some earlier Sharif screen appearances, in “Monsieur Ibrahim” he is so relaxed and natural that his performance was honoured with France’s César Award – usually given with more discernment about actual achievement than Hollywood’s Oscars – and the best actor prize at the Venice International Film Festival.

This amenability extended to his family life as well. In 2012 Sharif voiced public support of his grandson who models and acts under the name Omar Sharif Jr. and identifies as a gay Jewish man. As his grandfather stated: “No one has the right to control [my grandson’s] actions or limit his freedom.” This message of acceptance was also expressed in Sharif’s performance as the idealistic old Kemel, a defender of personal liberty, in a 2007 radio dramatization of Naguib Mahfouz’s “Cairo Trilogy,” available from BBC Audiobooks. In recent years, the Arab media have circulated an unfounded rumor that Sharif converted from Islam to the practice of Kabbalah. Instead, as Sharif told “L’Express” in 2004, he merely taught his son “tolerance. My philosophy of life is very easy to remember. When you leave home, you must be prepared to love everyone. If people are nasty, you are allowed to dislike or even hate them if you so wish. But if they aren’t nasty, you aren’t allowed to dislike them on the grounds that they are black, white, or yellow, Muslim, Jewish, or Christian. I have one Jewish grandson and one Muslim one. I cannot do better.”

Streisand herself seemed to agree, when posting a message online that Sharif was a “proud Egyptian, and in some people’s eyes, the idea of casting him in Funny Girl was considered controversial. Yet somehow, under the direction of William Wyler, the romantic chemistry between Nicky Arnstein and Fanny Brice transcended stereotypes and prejudice.”