I Am a Fugitive From a Catholic School 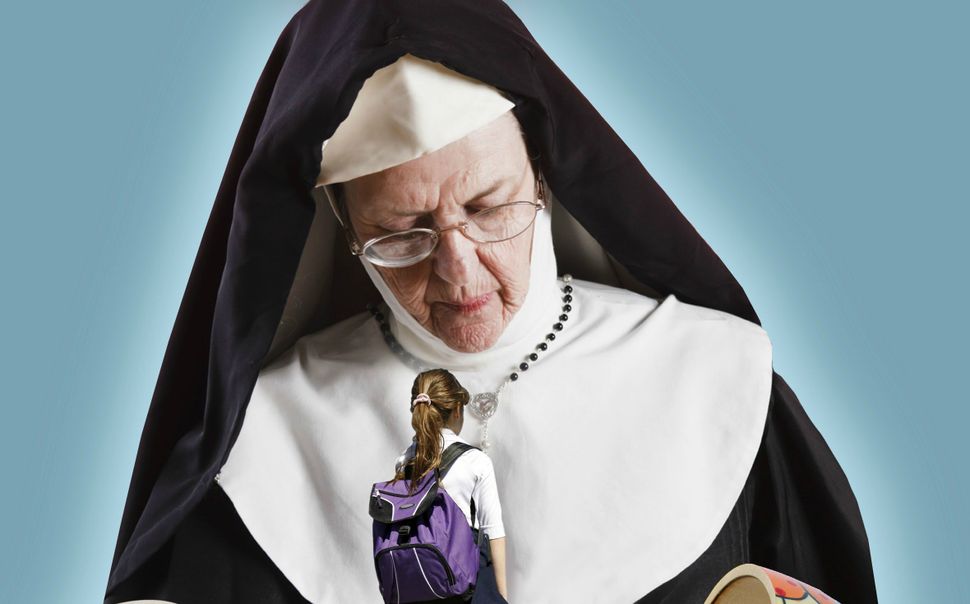 Soviet kids had it bad upon immigration. My fellow Soviet refugees and good friends were sent by their well-intentioned parents to a yeshiva, only to be circumcised at the tender age of 12 (Soviet Jews didn’t circumcise their kids because of military hazing). Welcome to the 12 tribes of Israel, boys. Their parents handed them Nintendo Gameboys in post-op as consolation prizes. My friends might argue that nothing beats the agony of being snipped as a preteen, but my brother and I would have to disagree. Try going from a godless state to becoming a Catholic overnight.

During their first months of trying to navigate the New York City school system, my immigrant parents were inundated with wild tales about the iniquity of public schools and the unhygienic yeshivas. They were told that public schools were rife with sex, drugs and HIV, and that signs of lax American parenting were everywhere. The alternatives were the various yeshivas in Brooklyn. Yet, the fables of Brooklyn recounted to my poor, unsuspecting parents scared them into thinking that their kids would get lice and never learn to speak English properly.

When we got to New York in 1989, we moved into an Italian and Irish enclave. Across the street from our apartment building was a Catholic school, the Immaculate Heart of Mary. Faced with a Scylla or Charybdis of choices, my parents decided that Catholic school was the right choice.

My immigration took me from atheistic mother Russia straight into the strict embrace of Sister Lawrence, our librarian. The first three floors of the building housed the classrooms; the nuns lived on the fourth floor. Every Wednesday, we would go to Mass, where we would take communion and pray. To this day in a contest of communion wafers versus matzo, I’ll take the communion wafers. Every Friday we had religion class, where we filled in a workbook with all sorts of New Testament trivia; we were also tested on the Hebrew Bible (or Old Testament in Christian parlance).

My parents should have known better. Hadn’t they seen Mel Brooks’s “History of the World”? Even if they had forgotten about the expulsion from Spain and Portugal, Brooks’s film, one of the few American movies we Russians knew by heart, should have taught us all we needed to know about the Inquisition. While few foreign movies were available in the Soviet Union, my father had rented Brooks’s film from one of the first video stores in Leningrad. We watched it over and over again on our VCR. (The second American movie that I remember watching at age 8, another American cinematic classic, was “Bad Military Babes” or some such title, a lesbian porn flick. Which come to think of it, maybe wasn’t so far from being immersed among nuns.)

Although there was no Judas cradle, Spanish donkey, head crusher or rack in her office, one of the nuns, the local Torquemada of my junior high, was not below chastising me for chewing gum and interrogating me about my pseudo-Christian identity. Specifically, when the nuns suspected that I was Jewish, they would ask me whether we really had a Christmas tree, for Christmas. I related to them the joy and wonder of getting a tree every year, which we decorated with exquisite Soviet glass ornaments. What the Catholics did not know was that everyone in the former Soviet Union had trees, New Year’s trees. Stalin had replaced Christmas with New Year’s Eve, a secular holiday, in 1935. Jews like people of all other religions and nationalities celebrated New Year’s, lit their trees, and distributed presents after midnight on January 1.

In my four years at Catholic school I did not learn to be a vessel of purity and sacred teaching; instead of writing about the catechisms, my diary from middle school and junior high reads like a litany of crushes. While I should have been concentrating on the New Testament, I spent my time contemplating boys. In 1993, I — like all my other fellow Catholic school students — underwent confirmation (my parents felt that there was no reason for me to stand out), intended to be an affirmation of one’s Christian maturity and a joining with the Holy Spirit.

I had to accumulate a certain amount of confirmation hours, which I did by working at the rectory and helping with a food drive. A diary entry describes my confirmation experience (my confirmation number was 54, and I had a crush on number 53, Frank, who was in 8th grade): “Today in church everyone was kneeling and my kneeler wasn’t out, so I took it out but instead of landing quietly it dropped on his feet, he looked at me and blushed.” A religion that tried so hard to instill chastity spurred kids to be even more aggressive in pursuit of the other sex than they otherwise would be. Catholic schoolgirls dressed like sluts in training; our uniform looked chaste with knee-length maroon plaid skirts and wool vests, claret tights, and white or pink collared shirts. Yet, girls found ways to distinguish themselves, and they would roll up the waistband on their plaid maroon skirts until the knee length skirt would turn into a mini skirt, barely hiding what it was meant to protect.

I abandoned the Catholic fold as soon as I graduated from junior high and went to public high school, where I went back to regarding myself as Jewish. The Immaculate Heart of Mary School has long gone out of business, and the building has been taken over by Brooklyn Prospect Charter School; it is rumored that the nuns in their starched, white wimples continue to live on the fourth floor. In an irony of fate, my 4-and-a-half-year old son goes to pre-K in what used to be the Catholic high school, Bishop Ford. Like many Catholic schools across the nation this one was bankrupted, and the city took over the building. Mayor Bill de Blasio has opened dozens of universal pre-K classes there. Meanwhile, my brother remains uncircumcised.

Anna Katsnelson writes about theater for the Forward.

I Am a Fugitive From a Catholic School