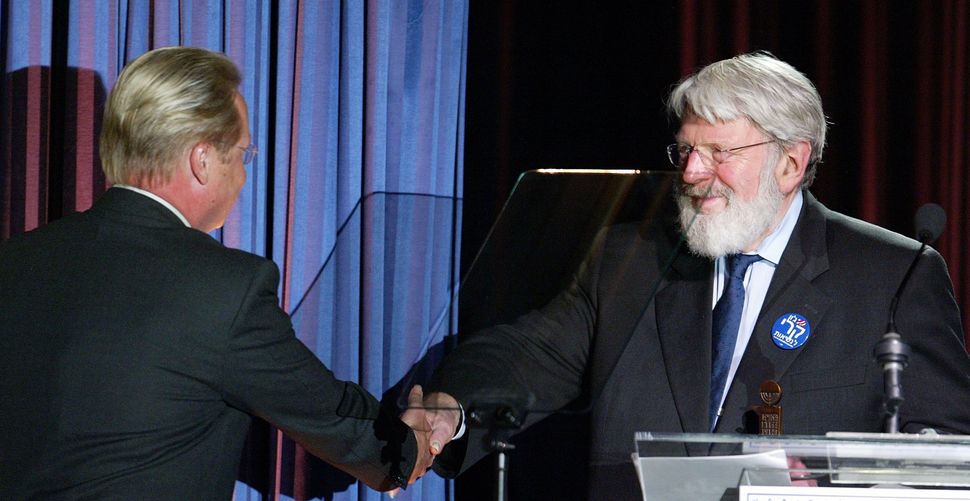 Theodore Bikel, who has died at the age of 91 in Los Angeles, was a shtarker, unlike many showbiz stars who merely play shtarkers on TV or onscreen. The barrel-chested, booming-voiced actor and singer had talent and stamina, the kind that allowed him to play Tevye in “Fiddler on the Roof” over 2000 times. After over sixty years as a folk singer Bikel offered resonant, blunt, direct performances that captivated audiences.

A lifelong fighter, as a youngster in Vienna after the 1938 Anschluss, he returned home bloodied from schoolyard brawls with anti-Semitic classmates, as he recounted in “Theo: An Autobiography”. Bikel was equally combative as an ambitious young Israeli actor after his family made Aliyah. Bikel’s Bukovinian Jewish father Josef, who toiled in an insurance company, was a deeply cultured, ardent Zionist who made sure his son’s Hebrew lessons began at age five, before any other schooling. At-home readings of Hebrew and Yiddish classics made Bikel ultra-aware of Jewish heritage, as to be expected for a boy named after Theodor Herzl, whose birthday he shared.

In Tel Aviv, Bikel struggled for roles at the Habima, Israel’s National Theatre, only getting a bit part in a 1943 adaptation of stories by Sholem Aleichem. So he co-founded his own chamber group in 1944, the still-thriving Cameri Theatre After training in London’s Royal Academy of Dramatic Arts, Bikel did not return to live in Israel after its statehood was declared in 1948, although he narrated the film “Ein Breira” (Song of the Negev;1949) a U.S.-Israel co-production directed by the Polish Jewish filmmaker Joseph Lejtes (1901–1983). Bikel wrote in “Theo”: “A few of my contemporaries regarded [not returning to Israel] as a character flaw, if not a downright act of desertion. In me there remains a small, still voice that asks whether I can ever fully acquit myself in my own mind.”

Whatever Bikel’s possible guilt as a “yored,” combined with his survivor’s guilt after the Holocaust, he was immediately occupied as an actor in London. He was cast in bulvan roles, such as one of the brutish cohorts of Stanley Kowalski in a London staging of “A Streetcar Named Desire” with Vivian Leigh. He remained with that production in London for a year and a half, understudying the roles of Mitch and Stanley. Bikel enjoyed an even longer run of two years in London playing a Russian officer in Peter Ustinov’s cold war satire “The Love of Four Colonels.”

Director John Huston saw the play and cast him without an audition in “The African Queen” (1951) for what would turn out to be Bikel’s film debut. Eventually moving to America, Bikel stayed for two years on Broadway as Captain von Trapp with the 1959 original stage performance of “The Sound of Music,” although he reportedly wearied of singing “Edelweiss” at some point in that run. His only Oscar nomination came for Best Supporting Actor in 1958 for “The Defiant Ones,” playing a surprisingly humane sheriff who leads a posse in search of a pair of escaped chain gang convicts (Sidney Poitier and Tony Curtis).

Often defiant himself, Bikel’s social consciousness grew during the 1960s. He was arrested for participating in civil rights demonstrations in Birmingham, Alabama. As an opponent to the Vietnam War, he was elected as a delegate for Eugene McCarthy at the 1968 Democratic National Convention where he led other delegates in folk songs and ballads decrying Chicago’s mayor Richard Daley, who had authorized the use of force against demonstrators.

Rare for a successful actor — Bikel was twice nominated for Tony Awards, in 1958 for “The Rope Dancers,” a domestic tragedy by Morton Wishengrad (1913-1962), and also for “The Sound of Music” — he was concerned about the fate of other actors. Circa 1960 he became active in Actor’s Equity, in 1964 he was elected vice-president and in 1973 became president of the organization, a post he held for a decade. An advocate of collective labor, Bikel noted: “If it were not for the unions and guilds, we would have nothing to protect us from our own folly or from those who seek to abuse our love for what we do.”

Despite his varied career, including screen appearances as Zoltan Karpathy, a Hungarian phonetician (the “hairy hound from Budapest”) in “My Fair Lady” (1964) to a rock group manager in Frank Zappa’s rock film”200 Motels” it is as a fighter for social justice that Bikel may be best remembered.