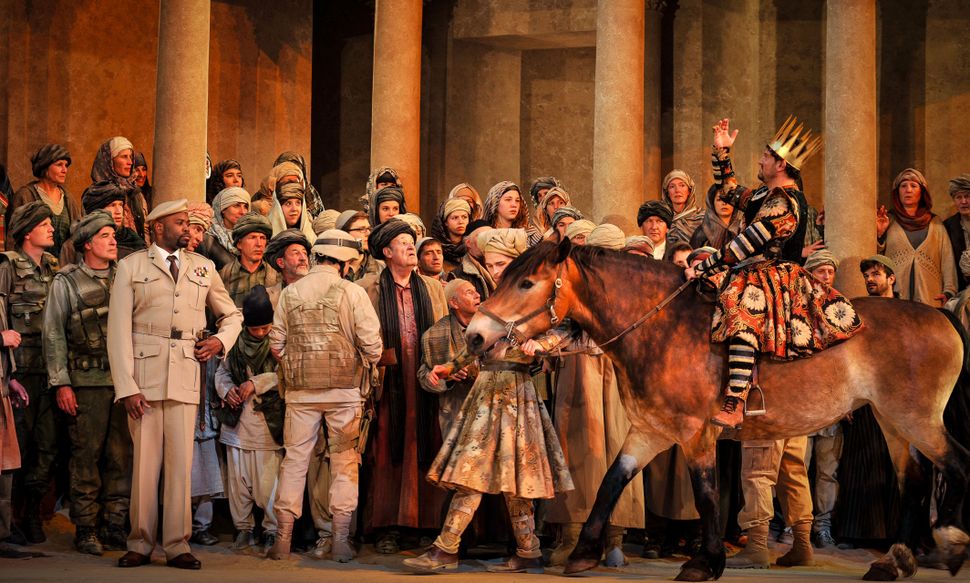 The village of Oberammergau might be the least Jewish place on earth. Nestling at the foothills of the Bavarian Alps, the town is synonymous with the Passion play that residents have been putting on since 1637, a theatrical and religious spectacle that for much of history transmitted anti-Jewish prejudice, inciting pogroms and other violent acts in nearby towns and, later, winning the admiration of Hitler, who attended the 1934 performance.

The streets are named for New Testament figures and crucifixes stare down from virtually every house. In other words, this is not a place where one might expect to find anything Jewish that prefigures Christianity.

And yet, this summer, the plaintive strains of “Va pensiero,” the famous lament of the Hebrew slaves in Giuseppe Verdi’s “Nabucco,” is filling the Passionstheater, the 4,700-seat auditorium where the Passion play will be presented for the next time in 2020.

Staged by Christian Stückl, the director of the Passion play since 1990 and the galvanizing force behind Oberammergau’s other theatrical outings over the past decade, “Nabucco” is the first opera put on during the village’s summertime festival, which became a yearly event only after the 2010 Passion play. Given Oberammergau’s natural resonance with religious themes, it should come as no surprise that Stückl has been drawn to plays with biblical motifs. Past summers have seen productions of Thomas Mann’s epic “Joseph and His Brothers,” Stefan Zweig’s little-seen “Jeremiah,” and the world-premiere of Feridun Zaimoglu and Günter Senkel’s drama “Moses.”

Stückl, who runs the Munich Volkstheater in addition to his activities in Oberammergau, chose “Nabucco” for its religious resonance as well as the mammoth role assigned to the chorus. In this production, the majority of its 180 members are villagers who normally sing in the Passion play.

“Nabucco” was Verdi’s first smash hit when it premiered at La Scala in 1842. Although not as frequently performed nowadays as the composer’s middle and late works, such as “La Traviata,” “Rigoletto” or “Aida,” it is nonetheless a mainstay of many leading opera companies as well as a popular choice for outdoor venues, such as the Arena di Verona, whose lushly historical production is being performed this summer, and even at Masada. 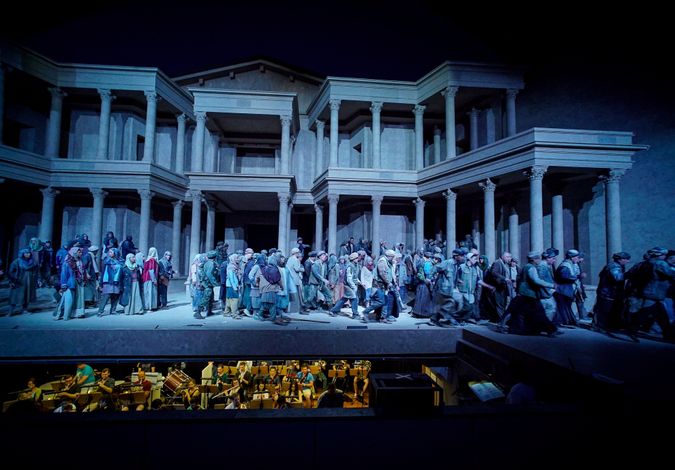 Show of Shows: Giuseppe Verdi’s ‘Nabucco’ is currently being performed at the Passionstheater in Oberammergau in Bavaria. Image by Arno Declair

“Nabucco” is undeniably effective as a historical epic and political potboiler, but just how Jewish it is is open to debate. Temistocle Solera’s libretto, based on an earlier French play, provided the composer with a grand historical panorama set amid exotic locales, much like Antonio Ghislanzoni’s libretto for “Aida” would 30 years later. The two main Jewish characters, the high priest Zaccaria and the Hebrew prince Ismaele, are musically memorable but psychologically flat. Verdi characterizes the Jews mainly as a proud yet downtrodden collective. During the struggle for Italian unity in the decades following the opera’s composition, Verdi’s dispossessed Hebrews who yearn for a return to their homeland resonated with the patriots of the Risorgimento. Even nowadays, “Va pensiero” is one of the best-known and loved hymns in Italy (as well as, ironically, a favorite of the racist Lega Nord, a political party that wants Northern Italy to become its own state).

An arguably more Jewish opera is Giacomo Meyerbeer’s “Les Huguenots,” which premiered in Paris five years before “Nabucco.” A tale of forbidden love and religious strife that culminates in the St. Bartholomew’s Day Massacre, it was the most successful opera of the 19th century. It has also been suggested that for Meyerbeer, a German-Jewish composer whose real name was Jacob Beer, the Protestants slaughtered by zealous Catholics were stand-ins for the persecuted minority to which he himself belonged. Given the bloodbath in Act Five, things certainly end much better for Verdi’s crypto-Italian Hebrews; although contrived solely for dramatic (rather than political or ideological) ends, Nabucco’s conversion to Judaism at the end of the opera was possibly the most striking example of a Jewish wish fulfillment fantasy until Quentin Tarantino’s “Inglourious Basterds” over 150 years later.

Stückl opted against a historically grand production style, instead depicting Jerusalem and Babylon as contemporary Near Eastern societies ravaged by despotism and humanitarian crises. Watching the harried masses, the foreign mercenaries, and the desert warriors rushing around stage, it was impossible not to think of recent headlines, from Libya to the Syrian Civil War to ISIS to the refugees pouring into Europe. It was a clever and dramatically effective device for thinking about how the world of “Nabucco” is still torn apart by religious strife. It was also refreshing to see a “Nabucco” where the Hebrews were not shuckling under tallises and shtreimels. (I’ve seen at least three productions where that happens.) Speaking over coffee several hours before the premiere, the director called attention to the absurdity of such depictions. “In many productions of ‘Nabucco,’ the Jews look like they came out of photographs of Europe in the 1930s,” the chain-smoking and energetic director explained. “And you wonder, who then is Nabucco supposed to be? Hitler? And what would it mean for him to convert to Judaism at the end?” The questions hung in the air like the smoke from his Lucky Strikes.

The director is deeply aware of Oberammergau’s problematic history and seems determined to confront it head-on. In 2000, he presided over the most significant revision of the text of the Passion play in over a century. The infamous “oath of blood” from the Gospel of Matthew that ascribed collective guilt for Jesus’ death to the Jews in perpetuity, was excised from the text. Many of the changes that Stückl fought for emphasized the political conflicts within Judaism under the Roman occupation. The changes also helped remold the Passion as a Jewish drama. In the 2010 edition, the chorus recited “Shema Yisroel” in the Temple while Jesus held a Torah scroll aloft. And during the Last Supper, Jesus recited Kiddush and Hamotzi. That year, Stückl invited a group of American Jewish students to Oberammergau, along with Noam Marans, a rabbi from the AJC, one of the main groups (along with the ADL) that had been pushing for reforms to the Passion script for decades. For the past five years, students from the Ernst Ludwig Ehrlich Stiftung, a German-Jewish scholarship program, have been invited to take part in a weekend-long theater workshop. Over the course of this year’s program (in which I participated), the fellows attended the premiere of “Nabucco” and the opening reception, were given a backstage tour of the Passionstheater by Stückl, who regaled the students with tales from Oberammergau’s colorful history, including his own struggles to institute the Passion play reforms, and attended lectures and discussions. 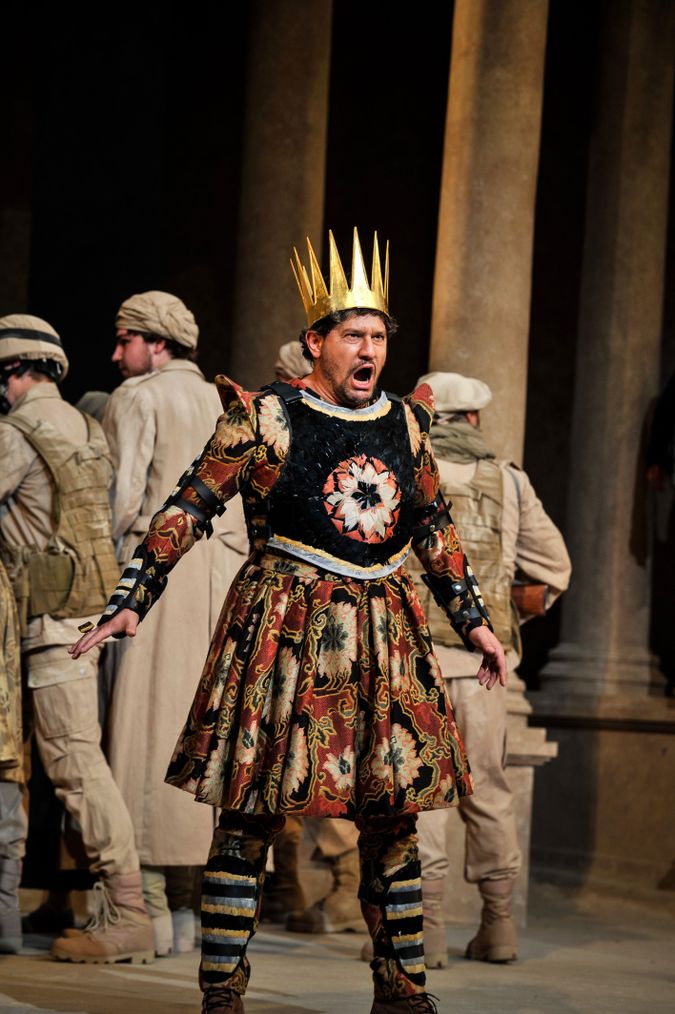 Stückl was the group’s near-constant companion, sitting and drinking beer with them late into the evening and even participating in a song-filled outdoor Havdalah ceremony that seemed to confuse the passersby. Stückl said he looked forward to German Jewish students’ reactions to the Passion play in 2020. “Up until now, the only Jewish comments we’ve received on the play are from American organizations,” he said. It may be five years away, but Oberammergau plans well in advance. The artistic team for 2020 was finalized a few weeks before the “Nabucco” premiere. Stückl has already courted controversy by appointing Abdullah Kenan Karaca, a 26-year-old director whose parents emigrated from Turkey to Oberammergau, to be his second in command. “There are some critical voices in the community about having an assistant director who is Muslim, of all things,” Stückl commented. And while it’s too early to say what will be different in 2020, Stückl says more script revisions are inevitable. “I don’t think our work with reexamining the text will ever be over,” he said, exhaling.

A.J. Goldmann, a longtime Forward contributor, writes about arts and culture from Europe.