This Is Your Brain on Kabbalah 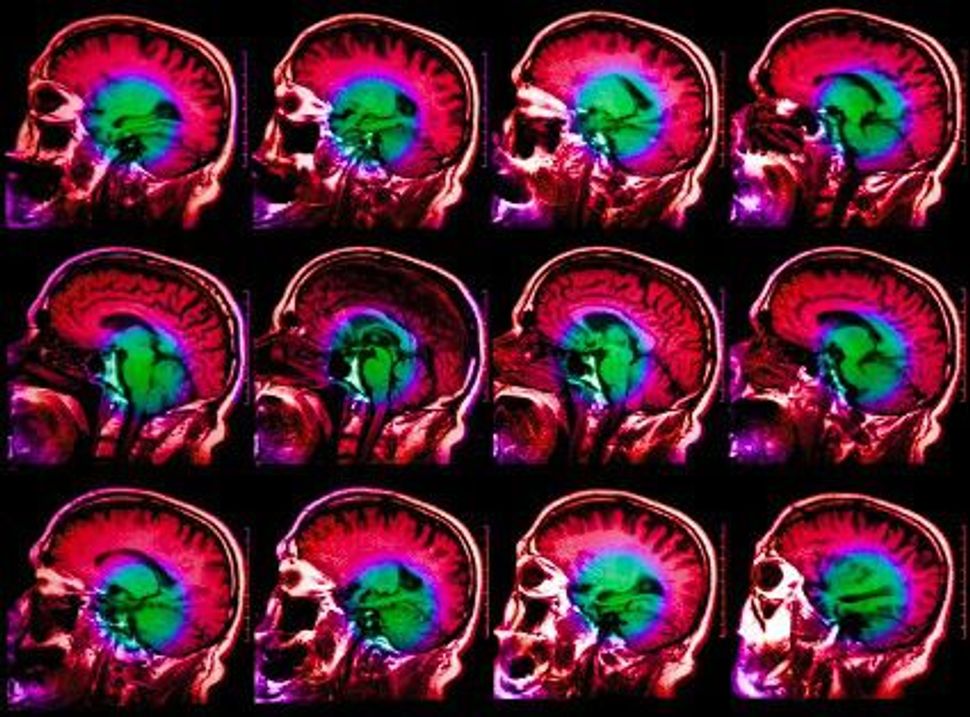 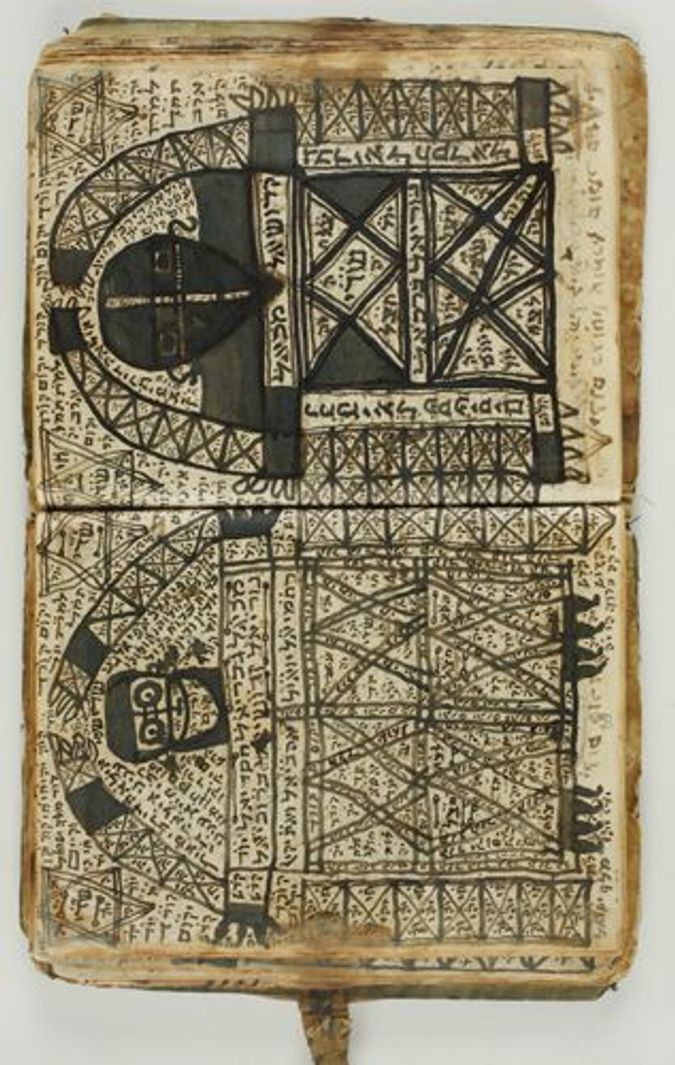 Eight hundred years before Oliver Sacks started poking around patients’ brains to see how they produce hallucinations, another Jew, Abraham Abulafia, was doing similar research on himself — by purposely inducing his own hallucinations.

Except, he wouldn’t have called them that. To the 13th-century Spanish Kabbalist, these visions, which often featured a human figure that looked just like Abulafia himself, were mind-blowingly great because the figure would reveal secrets about God. Abulafia got this mystical doppelganger to appear by experimenting on himself with sleep deprivation, letter recitation, fasting, breathing exercises — all techniques that can alter your brain.

So, does that mean early mystics were the original neuroscientists?

“Yes” is more or less the answer we’re given in “Kabbalah: A Neurocognitive Approach to Mystical Experiences,” a collaboration between two Hebrew University of Jerusalem scholars: Shahar Arzy, a neurologist, and Moshe Idel, a professor of Jewish thought. By comparing first-person accounts written by medieval Kabbalists with data from modern neuroscience labs, the authors try to identify the brain mechanisms underlying out-of-body experiences, doppelganger experiences, and other paranormal-sounding stuff.

Turns out people in the Middle Ages had lots of the same hallucinations people now have — though the reactions to those visions can be strikingly different. Take this account of a modern neurological patient who saw a doppelganger:

When he got up from bed, he turned around and saw himself still lying in the bed. He was angry about “this guy who I knew was myself and who would not get up and thus risked being late at work.” He tried to wake up the body in the bed by shouting at it, then by shaking it, and then by repeatedly jumping on it. His double did not show any reaction. Only then did the patient realize that he should be puzzled about his double and became increasingly scared by not knowing which of the two bodies he really was… because he experienced his self-location to be alternating between the two bodies.

This patient was so desperate “to stop the intolerable feeling of being divided in two” that he jumped out of his window. And who can blame him? The experience sounds freaky as hell. Which makes it all the more incredible that a mystic like Abulafia actually chased after it, with the furious zeal of a bride lunging for the last Vera Wang gown at a sample sale.

And he succeeded. Assuming others would want to do the same, he wrote instructions:

Sit as though a man is standing before you and waiting for you to speak with him; and he is ready to answer you concerning whatever you may ask him, and you say “speak” and he answers… and begin then to pronounce [God’s name] and recite [the first combination of letters], drawing out the breath and at great ease; and afterwards go back as if the one standing opposite you is answering you; and you yourself answer, changing your voice.

As Abulafia toggled between his perspective and his doppelganger’s, he never seemed to wonder: What if I’m just hallucinating? What if I’ve gone temporarily insane? But one man’s success is another man’s symptom: Abulafia’s student Nathan Ben Sa’adya Har’ar did worry that “perchance, God forbid, it is a spirit of folly which has entered me.”

That seems like a reasonable reaction when you suddenly can’t tell where your self (that most un-lose-able of possessions!) is located. And sure enough, many of the symptoms that accompany mystical experiences — dissociation, depersonalization — are listed in the DSM-IV. Show up at a shrink’s office with enough of them and you’ll get diagnosed with a personality disorder. You might even end up on the psych ward. 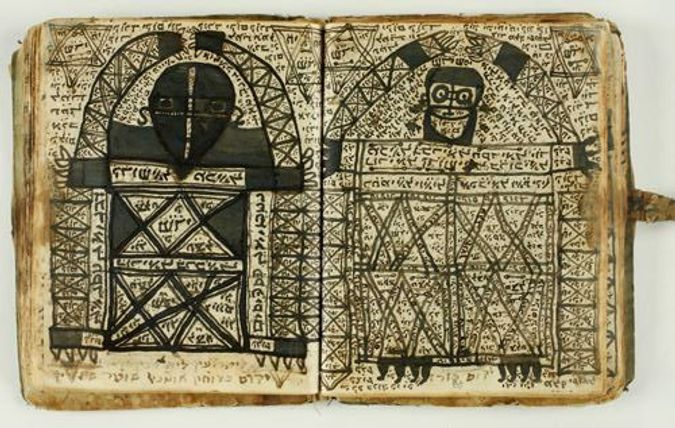 Arzy and Idel are aware of the similarities between mysticism and mental illness. They hope that by shedding light on mystics who voluntarily induced these states, their work can “illuminate the continuity of the psychiatric scale from healthy subjects through personality disorders to psychiatric patients.”

This might just be the book’s most important contribution: It highlights the fact that hallucinations like these don’t automatically make you “crazy,” and that “crazy” people aren’t inherently different from the rest of us. With the help of a few choice techniques, we can taste some of the same altered states of consciousness that they experience. Doing that can lead to important breakthroughs — just think of Oliver Sacks, whose personal experiments with drugs gave him usable insights into his patients. If we recognize the brilliance of that, why not recognize the Kabbalists as “pioneering investigators of human consciousness”?

In some other respects, though, Arzy and Idel’s book is disappointing. The fact that it focuses on 11 Jewish mystics seems to artificially limit the study to a small sample size. Comparing reports of ecstatic mystical experiences across a few world religions would yield more compelling results. Of course, to pull that off you’d need a broad coalition of scholars spanning many areas of expertise — so for now this project is a good start. Hopefully, it will point the way to a broader cross-cultural comparison before long.

A word of warning: Don’t turn to this book if you’re looking for a “Kabbalah 101” crash course. The language is dense, even by academic standards. The argument would have been more compelling if the authors had included more case studies from contemporary labs, and juxtaposed them side-by-side with each first-person report of a mystical experience. As it is, we spend a lot more time in the Middle Ages than we do in the lab, so your inner medievalist will be entertained but your inner science geek may feel neglected.

If, on the other hand, you’re looking for an answer to the question “Why do Orthodox Jews keep telling me that Kabbalah is a ‘don’t try this at home’ sort of thing?” — well, this book is for you. You’ll reach the last page understanding the upsides of delving into mysticism. But you’ll also be pretty freaked out.

This Is Your Brain on Kabbalah