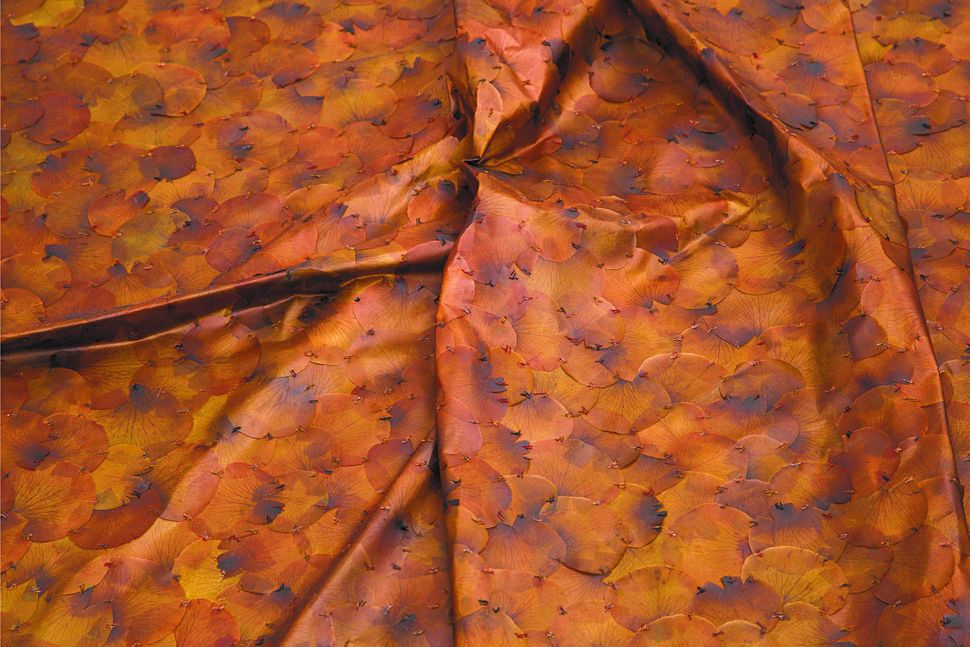 Throughout her career, the Colombian artist Doris Salcedo has devoted herself to exploring and quietly uncovering lethally efficient acts of human cruelty. Her sculptures and public installations, which she terms “interventions,” confront instances of violence and oppression, legacies of injustices and historical perpetrations. They excavate what has been repressed and buried, and dig up what would be forgotten.

It is tempting to say, as many have, that Salcedo’s art is a form of mourning, that she has taken on the role of designated mourner. But it might be more accurate to understand Salcedo as someone who invites others to mourn, who designates the audience to be mourners. She cajoles and coaxes us to consider, forces us to encounter and engage.

In one part of Salcedo’s tightly curated, eponymous show at the Guggenheim, where it arrives from the Museum of Contemporary Art, Chicago and where it will be exhibited until October 12, visitors walk between and among paired tables, one set, inverted, atop the other, with mounds of dirt precariously holding the two together, young blades of grass breaking through the coffin surface of the top tables. It might make you mad, this graveyard: The piece, called “Plegaria Muda” (meaning “silent prayer”), serves as a memorial to the victims of mass killings, specifically those of young men who died in gang-related shootings in South Central LA and to the murders of impoverished rural migrants carried out by the Colombian army, from 2003 to 2009. Or else those tender filaments of brightly green grass might fill you with hope, might lead you unto acceptance.

But you also might call the aesthetic effect of this incongruity “optimistic despair.” You might think about how life goes on. Tears are not atypical, and there is plenty of hushed reverence. But mostly there is the sense that life, though fundamentally tragic, also includes moments of searing, profound beauty. Salcedo is acknowledging the forces that would — and do — strip people of dignity. In doing so, she transforms the humiliations wrought by tyranny into an assertion of human (and humane) agency.

Elsewhere, in what is perhaps Salcedo’s best-known work, entitled “Atrabiliarios” (a word meaning, roughly, “The Defiant”), old shoes, mostly women’s, some in pairs, some orphaned, are placed in niches cut directly into gallery walls and covered by a haze of partially translucent cow bladders, held to the museum wall by surgical sutures. “Atrabiliarios” is the result of Salcedo’s discovery that often the only means of identifying victims who had been “disappeared,” of recognizing bodies found in mass graves, was their footwear. The shoes staring out from behind the hazy scrims become portraits of sorts, stand-ins for people no longer around to stand in for themselves. And of course the shoes make literal the idea of “walking in someone else’s shoes”: They compel us to empathize with the “disappeared,” to embody those who have been forcibly removed. This is surely part of the defiance suggested by the work’s title.

It is probably impossible to see “Atrabiliarios” without thinking of the Holocaust, the iconic piles of shoes as synecdoche for destruction whose scale is too grand to fully fathom. But it may also be that Salcedo presents an important, even essential, means of thinking about memorializing incomprehensible suffering, about speaking of and to loss, about remembering what victims are no longer present to remind us of. 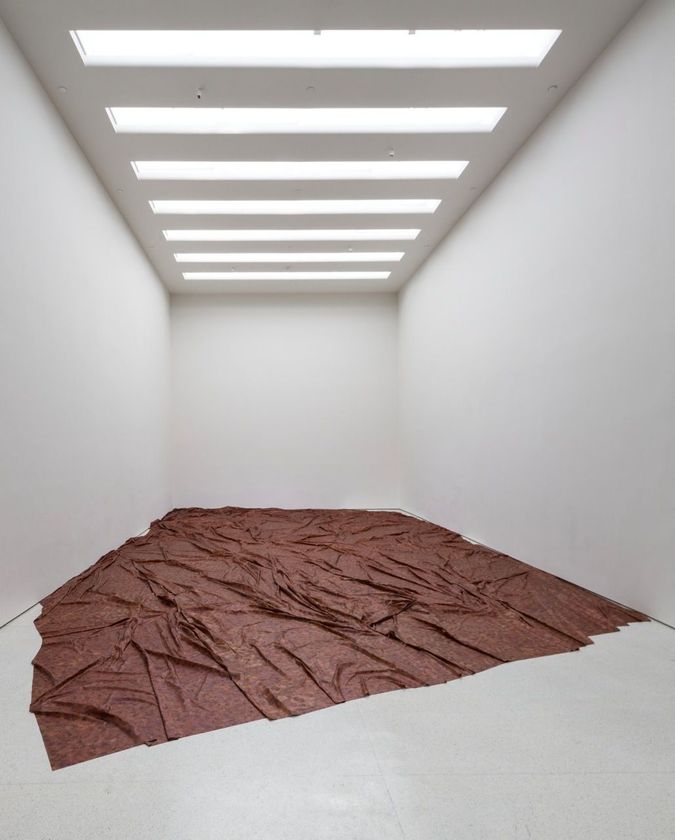 Designated for Mourning: A view of the artist’s installation at the Guggenheim Museum. Image by David Heald

Salcedo’s trademark may be her curious, necessary combination of vulnerability and solidity, her ability to juxtapose, often in the same work, the delicate and the durable. Consider “A Flor de Piel,” a tribute to a slain Colombian nurse, which consists of a shroud made of painstakingly sewn together rose petals, chemically preserved to maintain their blood-red vitality. It suggests a majestic sea of gore, a romance undone by brutality. Or stop in front of the sculptures that make up “Unland.” Three tables that have been broken apart, mismatched, and reassembled, held together by threads of raw silk and of human hair, wispy wires that have the strength to repair fractured wood, even as their presence testifies to other instances of violence. The series title alludes to the work of Paul Celan, the Holocaust survivor poet who documented his lived experience; each of the three sculptures bears a subtitle — “the orphan’s tunic”; “irreversible witness”; “audible in the mouth” — that directly refers to Celan’s poems. Celan’s work concerns itself with the breakdown of language in the face of destruction, with the barbarity of poetry after the Holocaust. Salcedo’s work is quieter, more coherent, at once subtler and more direct. I’m not sure it can be described. You may have to see for yourself.

Yevgeniya Traps writes frequently about art and literature for the Forward.