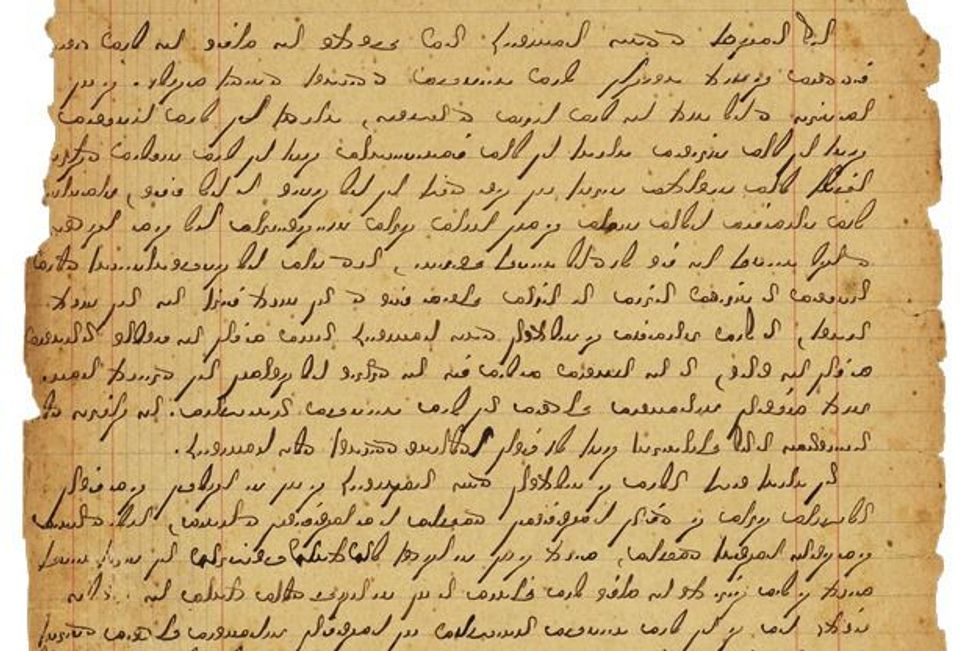 The preface page of Sa’adi’s soletreo manuscript. Image by Department of Manuscripts, National Library of Israel

Born in Paris in 1950, Dominique Vidal is a French author and journalist specializing in the Middle East, the Holocaust, far-right-wing European politics and related issues. A contributor to Le Monde Diplomatique, he has co-written “The New A-Z of the Middle East,” among other books. He is the son of Haïm Vidal Sephiha, a Judeo-Spanish linguist and activist born in Brussels in 1923 to a Sephardic family from Istanbul.

Vidal Sephiha survived Auschwitz, where he was a slave laborer for 16 months in the Fürstengrube subcamp, toiling in a coal mine. Moving to Paris after the war, he gradually became a leading light in the scholarly study of Judeo-Spanish, usually referred to in America and Israel as Ladino — erroneously, according to Vidal Sephiha. The United States Holocaust Memorial Museum, in Washington, D.C., houses the Haïm Vidal Sephiha Judeo-Spanish Library, donated by the scholar. Father and son have collaborated on a new book of conversations, “My Life for Judeo-Spanish: My Mother’s Language,” recently published in France by Le Bord de l’eau Editions.

Benjamin Ivry: How is your father doing? He is 92 now, right?

Dominique Vidal: His mind still works very well, although his legs are somewhat less reliable. He lives in Sceaux, a suburb to the south of Paris.

Your father believes we should use the term Judeo-Spanish for the language spoken by Jews in Spain before they were expelled in 1492. He and other scholars reserve Ladino for word-for-word translations of Hebrew or Aramaic liturgical texts into Spanish. Yet in America and Israel, Ladino is the common term for the spoken language. Are such differences in terminology important?

Judeo-Spanish is like a museum of 15th-century Spanish. It’s very special, dating from before that language’s reform. So according to my father and many specialists who share his views, there are in fact two languages: the vernacular one spoken in 1492, which is Judeo-Spanish; the second language is the word-for-word translation of biblical Hebrew, which was never spoken, but used for reading because few Spanish Jews were fluent in Hebrew.

“My Life for Judeo-Spanish” describes how, at a 1999 conference in Israel, former Israeli president Yitzhak Navon interrupted your father each time he said “Judeo-Spanish” by exclaiming “Ladino!” until your father replied, “Your political authority does not surpass my scholarly authority!” Navon reacted by disinviting your father to a Yad Vashem memorial for deported European Jews.

My father’s argument seems to me quite valid. Historically, Ladino means Latin. Ladino does not have the adjective “Jewish” in it; it’s a way to be Jewish without saying so. I must agree with my father, opposing Navon’s claim that because he had been president of Israel, he was qualified to decide matters that politicians should not decide. For years, Israel generally suppressed all Jewish languages that were not Hebrew. In the 1920s and ’30s, it was difficult to impose Hebrew on new residents. Navon was part of a political establishment, and his approach to resolving such questions was not serious. And my father thought it unacceptable to be barred from a ceremony at Yad Vashem.

In 1948, La Vara, the last American newspaper printed in Judeo-Spanish, folded. In Israel Aki Yerushalayim magazine is published a few times per year in Judeo-Spanish. Modern writers such as Enrique Saporta y Beja, Isaak Benrubi, Clarisse Nicoïdski, Salamon Bidjerano and Lina Kohen Albukrek have written in the language. Is that enough to guarantee its survival?

Certainly not. My father’s work in universities and in organizations reawakened Judeo-Spanish in France and around the world. My father sees this as a real advance, but if a new generation of people does not speak Judeo-Spanish to its children, then it will remain a dead language. The problem is the same for Yiddish. The principal cause of the progressive disappearance of these languages is the Holocaust. One of the countries which had the highest proportion of Jews speaking Judeo-Spanish was Greece, especially in Salonica. A high percentage of Jews from that area died in Auschwitz, so it is a demographic problem. Thanks to the work of my father, there is a university renaissance of Judeo-Spanish but not yet in the vernacular.

Your father is equally precise about the word “Sephardic,” which he believes should be applied only to Jews of Spanish origin. Those from North African countries should be called Mizrahi.

He is absolutely right in linguistic terms. Sephardic means Spanish, just as Ashkenazi means German. There are great differences between Sephardic Jews and those from the East, in their languages and religious practices. 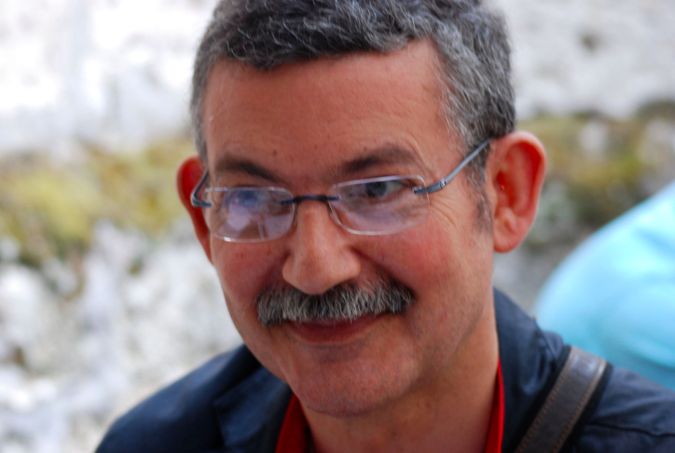 In a preface to “My Life for Judeo-Spanish,” you note that your father’s name implies survival: Haïm (the plural of “life” in Hebrew); Vidal (“life” in Spanish), and Sephiha (“renewal” or “survival” in biblical Hebrew). He states that in Auschwitz, “No one survived there on sheer faith… only those who could and would ‘organize themselves.’” What did he mean by that?

He means organize in the German sense, Organisieren or stealing. He felt it is immoral to steal your neighbor’s bread, but if you steal from the collectivity, it is not immoral. Stealing from supplies of soup or potatoes means you manage to survive. The fact of having survived Auschwitz imprinted his personality in ways that marked the rest of his life. All my paternal family was deported, but my uncle was deported as a Turk to Buchenwald, where there was a powerful clandestine communist and socialist prisoner movement. So my uncle left the camp believing that solidarity and collective action were all-important. My father returned thinking one can only rely on oneself, and thereafter he was never involved in politics. Instead, he focused entirely on his studies and the promotion of Judeo-Spanish.

In 2000, revisiting Auschwitz for the first time since the war, he sought to place a memorial plaque in Judeo-Spanish among those in other languages to remember 160,000 Sephardim murdered by the Nazis, but he faced opposition. Why?

One reason was the relationship between the Ashkenazi and Sephardim, and the mistaken belief that only Ashkenazi Jews were exterminated at Auschwitz, which is totally idiotic. To be sure, Ashkenazis were the majority killed there, but the percentage of Greek Jews who died there was overwhelming. My father pointed out that there was at least one memorial at Auschwitz in a language of which no native speaker was killed — English. No British Jew was killed at Auschwitz. When my father fights, he knows how to convince and persuade people which helps a lot, so his argument won.

In 1960 he decided to abandon your mother and you to live alone and devote himself entirely to scholarship. You have forgiven and come to terms with this decision, but what if he had been a failure at his studies?

It was a long time ago, and that question is answered for me. His mission was to reawaken Judeo-Spanish. I understand and accept that it was done at the price of breaking up with my mother and not seeing me for almost 10 years. If we had lived through that and nothing resulted, I do not know if I would have the same empathy today. My father is not at all cynical; he is very sensitive, romantic, and it’s true that when his mission in life is involved, he defends it tooth and nail. And he can be very tough with his intellectual adversaries.

Your mother decided that your name would be Vidal and not Vidal Sephiha, to sound more French. Was that necessary for making a career in journalism and publishing in France?

No. In 1950, when I was born, the memory of war was very much present. My father had returned from Auschwitz, and five years later my mother thought it best to avoid making Judaism obvious. Many of my colleagues with names considered Jewish had careers in journalism and it did not turn out to be a problem, as it might have seemed to my mother at the time.