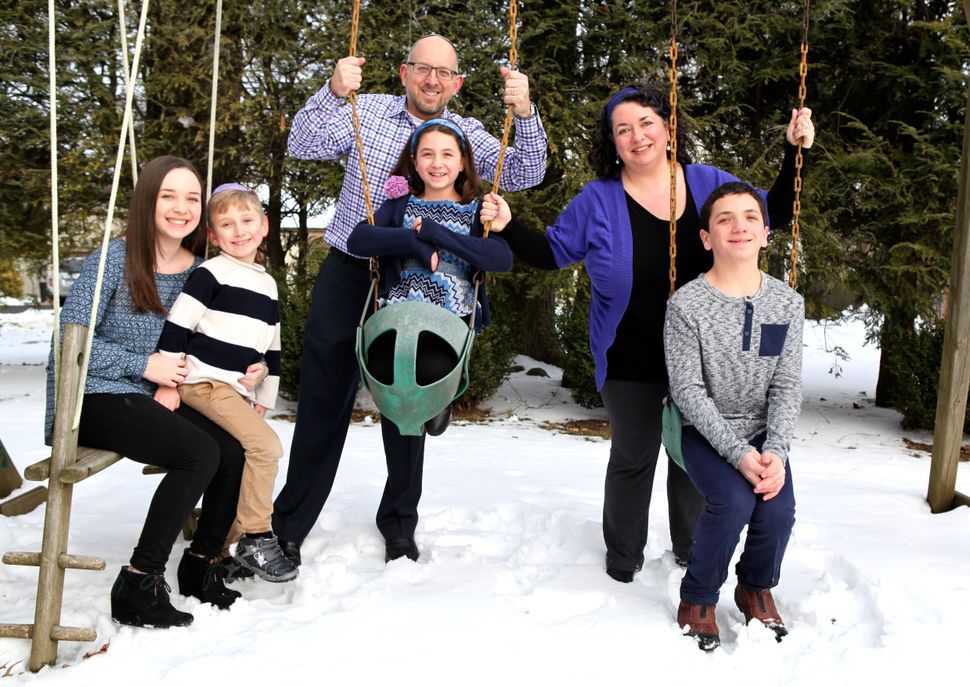 As of July, Ron Fish, 46, is the new senior rabbi of Temple Israel in Sharon, Massachusetts. His wife, Leah Bieler, 43, is a Jewish educator and Talmud scholar and carried on the couple’s love for music when she served as Fish’s cantor at their former synagogue. The two recently moved to Sharon with their four Fish-Bieler children, Hani, 15; Dore, 13; Nili, 11, and Lavi, 7.

Bieler, a native of New York, has lived in the New York City area nearly her whole life, while Fish, as the son of a Conservative rabbi, moved around quite a bit, attending three high schools in three states. Now he is sharing his love of basketball with his new congregants and may even bring out that video of his — sort of — appearance on Stephen Colbert’s show. He has answered all the questions for the family.

Leah and I met in the Hevruta room at JTS [Jewish Theological Seminary]. It was the study area in the library, in those days, where students could learn traditional texts in dialogue with a partner. Leah was studying for a degree in Talmud, and I was in my fourth year as a rabbinical student. We talked about learning using the Steinsaltz versus the traditional Talmud text and agreed that there was great value in using Steinsaltz. Of course, she does not remember this encounter. Obviously she made more of an impression on me than I did on her. We subsequently met again, at a mutual friend’s wedding. We started dating very soon after this friend’s wedding in the fall of my last year of rabbinical school. When I was ordained the following spring, I took a job in West Hartford, Connecticut. We were engaged within six months and married a year later.

We have just moved into our third home together. We had a very short window in which to look. And the house has to be within walking distance of the shul. So, not a lot of choices. But we are thrilled with our beautiful new home in Sharon, Massachusetts.

Our chores are very much shared. However, Leah is the cook. She is an outstanding chef, and so I do little in the food prep department. I do much in the food cleanup, shopping, organizing and straightening-up end of things.

Breakfast is a hurried affair during the week. With four kids who have to get out of the house by 7 or so, there is not a lot of time. We usually split our mornings of breakfast responsibility: three to Ron and two to Leah. With my minyan now at 6:30 and 6:20 a.m., this may need to be shifted in our new home.

Our week has revolved around Shabbat. With the weekdays usually involving various kinds of nighttime meetings for me, I hope to be part of bedtime at least twice a week. On Shabbat the whole family comes to shul and participates. Very often, Leah leads part of the service, and Hani, our 15-year-old, pitches in with youth services. During some of the summer we have “Shabbat Basketball” at our home, inviting the whole community to enjoy Shabbat afternoon together with us. We often have Shabbat dinner guests as well.

Our budget’s standout item might be airline tickets to Israel. We manage to spend summers in Jerusalem almost every year. This summer was an exception.

The story you will hear in our home many times is when Leah was a superhero. We were in Israel, and my father became very ill. I flew back to the states and helped my mother deal with a whole range of issues. Meanwhile, Leah was left with a 3-month-old, a 2 ½-year-old and a 5-year-old. When she flew back on her own with them the whole plane applauded for her, including the Haredi moms. You might also hear how our American kids went to Israeli camps, without Americans, from the age of 3.

Our ideal Sunday brunch — is [having] one. I work on Sundays. Ideal Shabbat dinner is in Jerusalem with our whole family, singing and enjoying great steak and fantastic wine.

What is your favorite room in the house?

Best room in the house — dining room. Filled on Shabbat.

Who is your favorite Jewish comedian?

Comedian — Leah would say Jon Stewart. I say Stephen Colbert. Even though he is Catholic, he gets it. Stewart still seems to be working out his Jewish “issues.” Colbert gets faith and irony, he gets the meaning of tradition and he can poke fun at it at the same time. Full disclosure: I was once “on” “The Colbert Report.” Google it.

What is your happiest or saddest memory in your home?

Most powerful memory in my home was sitting shiva for my father. I have never felt more supported by family, community, friends and Jewish tradition.

We have a beautiful piece of art from the naive art gallery in Tel Aviv; our family friend is the owner of the gallery. It depicts a version of the Queen Esther story while its figures of fish move in a magical way from the water to the sky, becoming birds, and then angels, along the way. The powerful figure of Esther is in contrast to the small, powerless men, especially Haman. Even Mordechai and Achashverosh seem mild and weak in her presence.

If you could change one thing about where you live, what would it be?

We would love to live a little closer to Saba, Savta and Grandma.

What’s one thing you do that defines your Jewish identity?

I am a rabbi. My wife is a scholar of Talmud, a writer on largely Jewish themes and a singer of Jewish music. Our home is permeated with the smells, rhythms and meaning of Jewish time. There is no moment which defines our Jewishness; they all do.