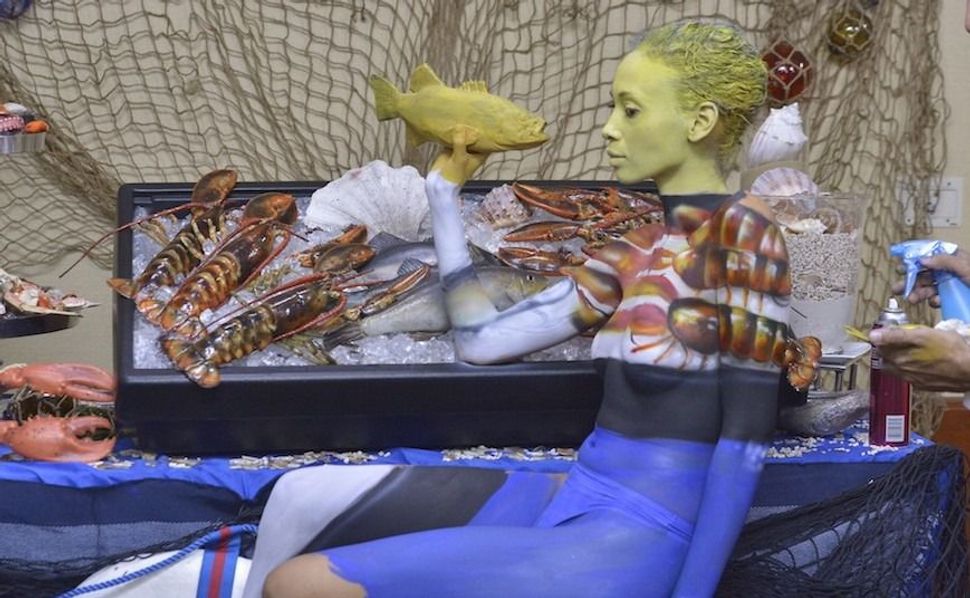 (JTA) — The world of reality TV is vast and scary, and I know because I watch way too much of it. But there are surprising gems to be found, and Game Show Network’s is one of them. Currently in its second season, the reality competition show is modeled after “Project Runway,” but instead of fashion-design hopefuls creating a new look for models to don each week, the contestants on “Skin Wars” bring their art directly to the model’s naked skin (save for some pasties and nude underwear).

This is the world of body painting, a burgeoning art form with festivals and competitions worldwide. Done right, it’s absolutely breathtaking. Body painters typically use both airbrushing and hand-painting techniques to create striking, if temporary, masterpieces — models can be painted to look like anything from mythical creatures, abstract interpretations or someone wearing realistic-looking clothes.

One of the front-runners on the current season of “Skin Wars” is Avi Ram, a 29-year-old Israeli artist living in Fort Lauderdale, Florida. Ram was born in Kiryat Gat and moved to the United States after serving in the Israel Defense Forces for three years, and now owns a successful airbrush shop. I spoke with Ram about his time on the show, how the Israeli army prepared him for reality TV and what he’s working on now.

When did you first start practicing art, and what medium did you begin with — assuming that it wasn’t human bodies?

Ram: I’ve been doing art all my life. I started doing airbrush when I was 18 years old, so that was about 11 years ago. I saw someone doing airbrush on the street and I was asking a lot of questions, and I started practicing by myself. I did my first job in Israel at a clothing store airbrushing T-shirts.

Do you remember the first body you ever painted?

That was when I moved to Florida, which was about five or six years ago. I got connected with this nightclub, and they asked me to show my work and asked if I could do body painting. I said I think I can do it, so they invited me to this event and I did body painting on bartenders and dancers. Of course everyone likes being naked, so it was fun.

Was it really awkward?

No, because I just look at the body as another canvas. I worked it out. I was very comfortable — I wasn’t nervous. They were very happy, and since then they’ve called me for every event. It just started to be a big hit.

While you were in the Israeli army, were you ever able to sneak in some time to practice art?

I did it mostly here and there — not on a daily basis. I did murals for my friends; things like that. Once a month I would try to find time to work and practice.

Do you feel like your time in the army helped you prepare for dealing with the stress of the competition on “Skin Wars”?

Definitely, yes. In the army it’s all about being on time and barely sleeping. On the show you always have to be on time, and you’re working so many hours you barely sleep, so I’m kind of used to it. And you always have people telling you what to do, so I’m used to that, too.

What was your favorite challenge on the show?

The camouflage challenge (in which contestants had to camouflage a model in a food tablescape), when I actually took the fish and camouflaged him. Everyone was talking about that fish! 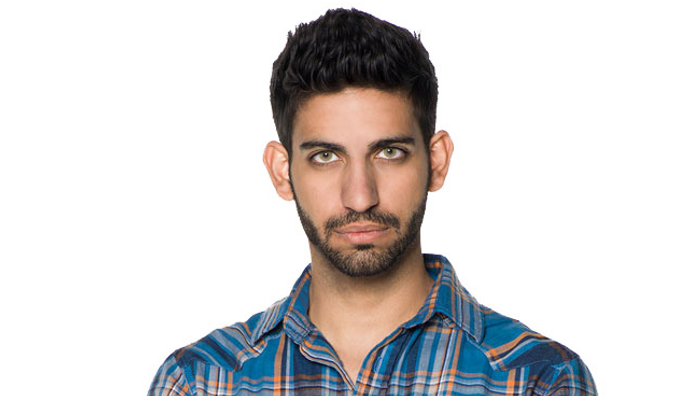 How long did the show film for? And did you get close with the other contestants?

Two months. We lived together in the same house, and because we didn’t have any media with us — no phones, no Internet, no music, nothing — we were talking 24 hours. We learned everything about each other, from our childhoods to what we want to do in the future. We started to become a very close family. Still today, we talk almost every day.

There’s a video of you on the “Skin Wars” website where you say you do art to support your mother in Israel, which is very touching. Has she always been supportive of your work?

Yes. Even when I moved to the States — I moved to achieve my dreams and to help my family, too. To be an artist in Israel, it’s not easy. It’s very hard at the beginning to be a very successful artist there, and I believe there is not too much appreciation of art in Israel.

When I moved over here, and I started seeing the different reactions from people, and how you can grow as an artist and what you can achieve, it opened a lot of different doors. You can be an artist in Israel, but not as a main job. It can be like a hobby. Over here, it’s more possible for it to be a professional job. So that’s something that I can do to help my family and send money to Israel.

Do you get to visit them often?

Not often, no. For the last eight years I’ve lived here, I went to visit them one time, and that was about five years ago. So I haven’t seen my family for five years. It’s very difficult. I can go and fly there and everything — but the only thing is, because I’m working so hard every day, and I do send money to my mom every month, I have to work and I can’t take a long vacation. So it’s really hard to live over here. But I do talk to my mom on a daily basis; we do video chats all the time.

Do you think your Israeli or Jewish upbringing influence your art in any way?

Even when I’m far from it, I always keep the culture of Israel. I might not keep kosher … but I do celebrate the holidays. You don’t see body painting in Israel. I know some Israeli body painters, but in Israel it’s not a big deal. So it’s nice that I represent Israel on the show, to bring some pride and to bring some taste of Israel.

So what are you working on now?

I’m actually working right now on wall murals for elementary schools in Fort Lauderdale. Every summer vacation when the kids are off from school, I’m decorating schools with colors and pictures on the walls to make the kids happy. I’ve been doing that for five years now.

Obviously you can’t tell me the final outcome of the show, but overall, are you happy that you went on it?