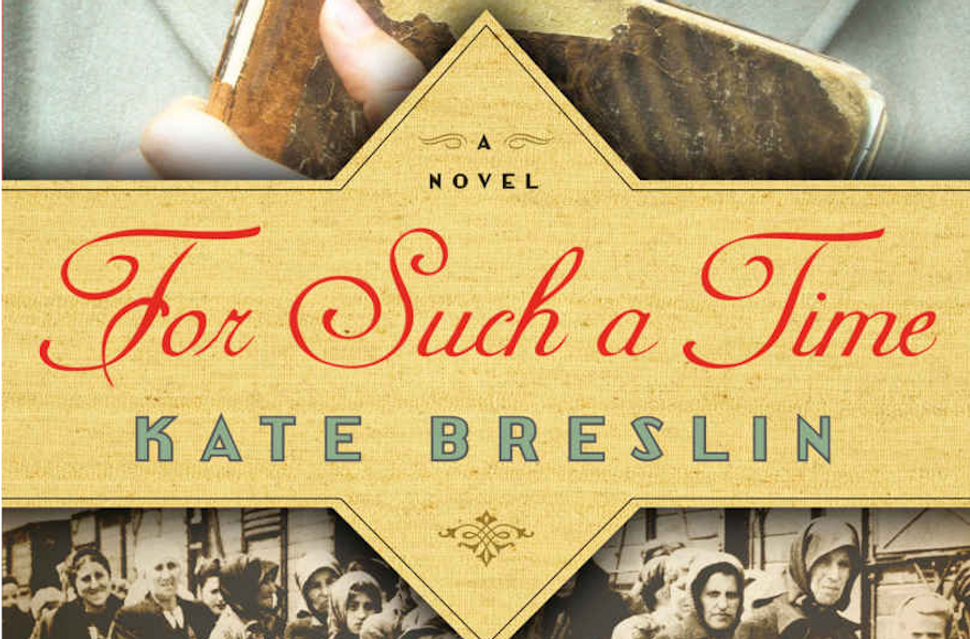 (JTA) — German thinker Theodor Adorno famously stated that it’s barbaric to write poetry after Auschwitz, but he said nothing about romance novels.

For author Kate Breslin, the Holocaust apparently provided just the right amount of narrative tension for her new book “For Such a Time,” inspired by the Book of Esther.

The novel, which chronicles the blossoming affections between Hadassah Benjamin, a blonde-haired, blue-eyed Jewish inmate of the Czech concentration camp Theresienstadt, and Aric von Schmidt, a German commander, was nominated for two RITA awards, given by the Romance Writers’ Association, and has generated outrage in the romance writers community.

“The fact that this book was nominated in two categories is deeply hurtful,” author Sarah Wendell wrote in an open letter to the RWA board of directors and posted online. “I don’t understand exactly how so many judges agreed that a book so offensive and insensitive was worthy of the RWA’s highest honor.”

“For Such a Time” was nominated for best first book and best inspirational romance of 2014. “Inspirational” is romance-novel code for “Christian.”

The book was published by Bethany House, which deems itself the “pioneer and leader in Christian fiction.” And Breslin’s biography begins, “I’m grateful that I’m a follower of Jesus Christ.”

Unlike Esther, who comes out as Jewish to save her people from genocide, Bresflin’s Hadassah (who escapes detection as Aric’s secretary under the name Stella Muller) converts to Christianity in the end to save herself.

Romance writers took to social media to express bewilderment that such a book should be recognized, calling attention to the obvious power imbalance within the relationship and the use of the Jewish genocide as a vehicle for Christian redemption.

“The reality of Aric’s relationship with Hadassah is that, at all times, he holds her life in his hands — and they both know it,” wrote a . “In that context, his repeated expressions of desire for Hadassah and his penchant for grabbing and kissing her aren’t just your standard romance dubious-consent hash, but are an incredible, intolerable abuse of his power.”

Katherine Locke, a Jewish romance writer and the granddaughter of a camp liberator, wrote on Tumblr about feeling betrayed by the community of romance writers and readers who have given the book enthusiastic reviews. She warned against using the Holocaust as a subject and pleaded that Breslin, the publisher, the Romance Writers’ Association and readers “consider Jewish voices that they co-opted, stole from, offended, undermined and erased through the publication and award of this book.”

The controversy surrounding “For Such a Time” joins other uproars about representation in so-called “genre fiction.” In 2014, a movement in the world of young adult literature sought to bring attention to the lack of diversity amongst its authors and characters under the social media hashtag #WeNeedDiverseBooks.

Earlier this year, the Hugo Awards, which recognize science fiction and fantasy writing, faced a backlash from a small cohort against nominations of women and writers of color. Romance fiction, which has a significant white, female, Christian readership, is now also grappling with being a niche form subject to shifting social expectations of inclusion and cultural sensitivity.

At the end of July, Kate Breslin and her Holocaust fantasy left the RITA award ceremony empty-handed. But Breslin has already moved on: Her latest book, “Not By Sight,” released earlier this month, is set in World War I-era England.