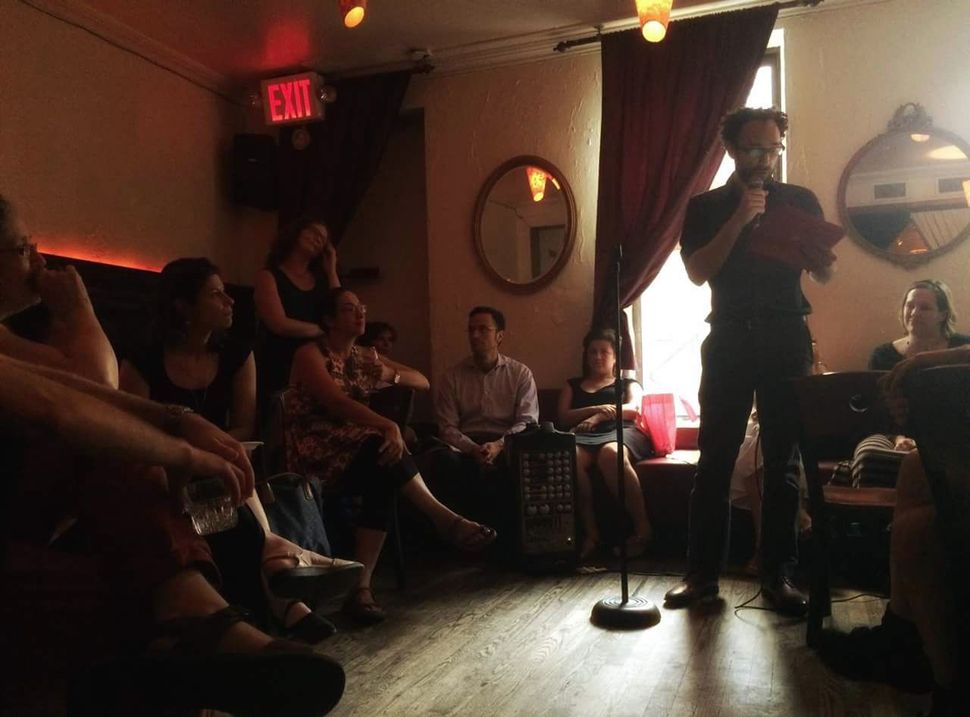 On August 3 more than 100 people packed the second floor of Solas, a trendy bar in the East Village. Over the din of music by Nicki Minaj and Drake, a group of people huddled in a corner discussing stills from a new website being displayed on a laptop. A passerby, seeing a large group of stylishly dressed young people listening to someone reading a speech off of a tablet, could have easily mistaken the event for the launch of a tech startup. If he listened closely, however, he would have heard that the speaker was greeting the supporters and editors of a new Yiddish Studies journal.

The evening, organized by In Geveb, which will officially launch on August 17, attracted a unique mix of Yiddish students, young academics, Yiddishists, artists and socially inclined young Jews. They embodied the spirit of In Geveb, which aims to serve as both a peer-reviewed academic journal and a blog covering Yiddish culture for a popular audience.

“We’re very excited about the possibilities for reaching new audiences through our journal and blog,” noted Saul Zaritt, a future Yiddish professor at Harvard University who serves as the journal’s editor together with Eitan Kensky, who will soon begin working as the Director of Collections Initiatives at the Yiddish Book Center. During their short speeches both editors emphasized the role that the journal will play in Yiddish Studies and noted that they, together with In Geveb’s managing editors (Madeline Cohen, Sarah Zarrow and Emma Morgenstern) have been working on the project for more than two years.

Zaritt emphasized the journal’s multidisciplinary approach, noting that In Geveb will seek submissions not only from scholars working in Jewish Studies, Germanic languages and other closely related fields, but also from historians, sociologists, art historians and literary scholars.

David Roskies, the Sol and Evelyn Henkind Chair in Yiddish Literature and Culture at the Jewish Theological Seminary, who serves as the journal’s senior advisor, spoke to the overflow crowd in Yiddish, stressing the journal’s importance as an intellectual home for Yiddish Studies. During his speech Roskies thanked the Naomi Foundation, the journal’s primary fiscal sponsor, which had initially contacted him several years ago looking for his advice on possible editors for a new Yiddish Studies journal. The Naomi Foundation, which supports a range of Yiddish educational programs in memory of Naomi Prawer Kadar, was represented at the launch by its managing director, Lindsey Bodner.

During an informal chat near the bar Zaritt explained that the journal would be different from most academic publications. Rather than being published as full issues at regular intervals the journal will appear in the form of thrice-weekly posts. The staff of In Geveb hopes that the frequent publishing schedule will be able to keep the attention of its readership throughout the year. Zaritt added that the journal has enough material already accepted to publish a few posts every week through November. In Geveb will also accept articles, translations and blog posts throughout the year. “We want to receive as many submissions as possible,” Zaritt told the Forward in Yiddish.

Attendees could be heard discussing the journal in a mix of English, Yiddish and Hebrew while eating pierogi and latkes from Veselka, a popular Ukrainian restaurant. Most people I spoke with felt that the journal has a very good chance of bringing new researchers to Yiddish Studies and helping to bring the field to a wider popular audience. If the enthusiasm at the launch party can be taken to be any indication, the journal will probably be quite successful as both an academic publication and an organizer of cultural events.

If only all Yiddishist organizations were able to get more than 100 young people to come out to a bar on a Monday night.