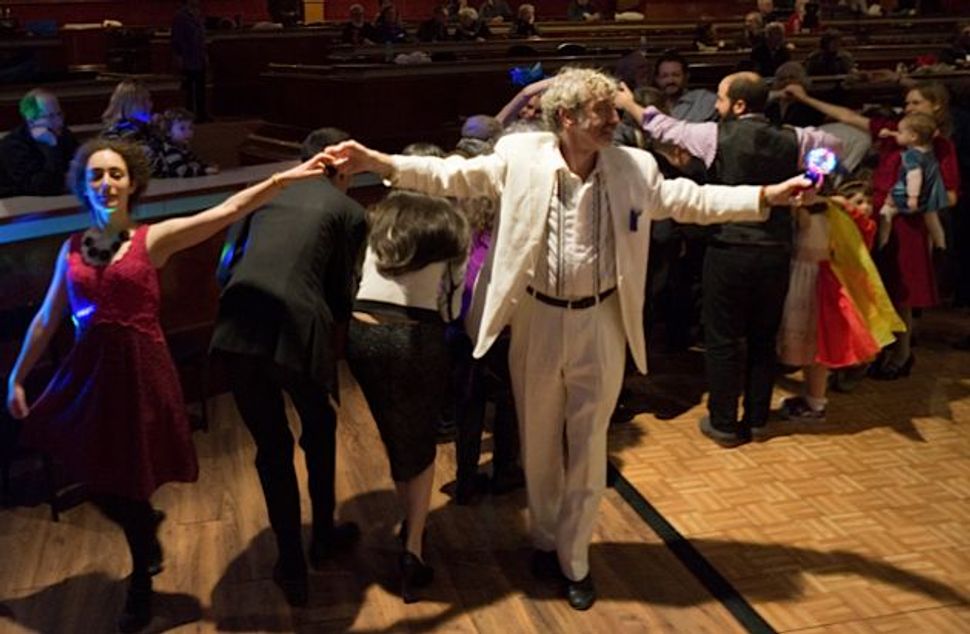 Chain of Continuity: Dancers take the floor at KlezKamp 2013. Image by Bob Blacksberg

When the announcement was made last fall that KlezKamp, the Yiddish folk arts gathering that took place in the Catskills every winter for the last 30 years, was ending, some of the movers and shakers in the klezmer scene resolved to organize a replacement. Now comes word that Yiddish New York will take place in Manhattan and just like Klez Kamp, it’s going to take place during Christmas week, from December 24 through December 29.

“We’ve been committed to figuring out how to fill the void left by KlezKamp and how to not have Christmas,” said Sarah Gordon, a vocalist in the band Yiddish Princess and a member of the nine-artist collective that is organizing Yiddish New York.

The gathering will feature workshops, concerts, dance parties and jam sessions at the 14th Stree Y, the Town and the Village Synagogue a few doors to the west, as well as other venues around the city. Local groups involved in the week-long event include the Sholom Aleichem Cultural Center in the Bronx, the Eldridge Street Synagogue and the Stanton Street Shul. The event’s fiscal sponsor is the Center for Traditional Music and Dance (CTMD).

“We’re hoping that doing this as a non-residential event will keep the cost down significantly and that people who otherwise couldn’t afford it will find friends with couches to stay with,” said Gordon, who started attending KlezKamp at the tender age of 6 with her mother, the late Yiddish singer Adrienne Cooper.

The cost of paying for a hotel stay during KlezKamp made the experience cost-prohibitive for many, according to Pete Rushefsky, executive director of CTMD and a member of the artist collective behind Yiddish New York. The cost of tuition, room and board for adults at the final KlezKamp last December ranged from $1,240 to $1,645.

“Everybody wants to see continuity for this community,” said Rushefsky. “I met my wife [Yiddish singer Madeline Solomon] at KlezKamp. There’s a lot of people like me.”

Online ride and housing boards will be set up to facilitate sharing of transportation and lodging. The Yiddish New York website says that tuition will be affordable, “under $500.”

“I think [the cost] will enable a wider audience to check it out,” said Rushefsky.

A core faculty of 20 to 25 teachers will be paid to give workshops during the day. The program will include an extensive offering of classes for children and teens, something that KlezKamp pioneered. Rushefsky says that Yiddish New York will draw upon the city’s artists, scholars and Hasidic community as resources for teaching Yiddish instrumental music and song, as well as dance, theater, language, history and cooking. He adds that New York is also rich in “co-territorial” masters of ethnic traditions that East European Jewry absorbed.

For many veterans of KlezKamp, the faculty jam sessions that took place at night in the hotel ballroom were a kind of klezmer Woodstock. The Klezmatics trumpeter Frank London, just back from a collaboration with the Italian Jewish musician Enrico Fink, said jam sessions will be happening at Lower East Side bars, some of them in the wee hours.

“We’re trying to make jamming one of the corner stones of Yiddish New York,” London said. “Our goal is to use the Lower East Side as a venue.”

Asked about the creation of Yiddish New York, Henry Sapoznik, a founder and director of KlezKamp, said: “It’s very exciting. Anything that raises the visibility of Yiddish is a good thing.”