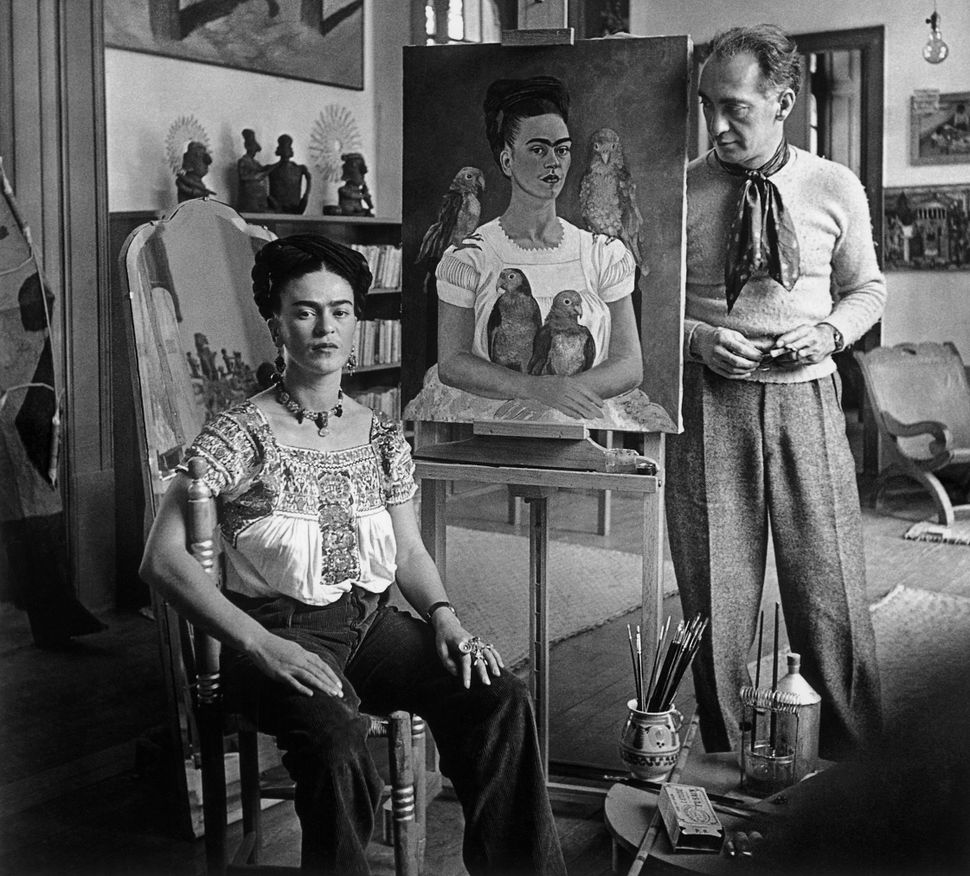 Image by Courtesy of the Nickolas Muray Photo Archives

Staring out of more than 50 portraits spread across a sprawling third-floor gallery, Frida Kahlo’s intense gaze greets visitors to the Textile Museum of Canada in Toronto.

But an unseen face on the other side of the camera looms just as large. Nickolas Muray was the Hungarian-born Jew who photographed Kahlo for over a decade in New York, Paris and Mexico City.

And as “Frida Kahlo: Through the Lens of Nickolas Muray” makes clear, he was also her lover, sounding board, intellectual sparring partner, and moral — and occasionally financial — supporter.

“It was an open secret during the time they were off-and-on intimate,” Mimi Muray-Levitt, the photographer’s daughter, told the Forward by email from Utah, where she now lives. “When Frida divorced Diego [Rivera] in 1939, my father thought Frida would marry him. But when she remarried Diego in 1940, he ended their intimate relationship and continued with her as friends.” Muray, who had been married and divorced, met and married his fourth wife, Peggy Muray, in 1942.

The exhibition’s genteel surface — it pairs Muray’s portraits with Mexican textiles typical of the period — hints at the pair’s torrid intimacy, according to Muray-Levitt.

“In 1938, at the height of their affair, Kahlo painted ‘Xochitl,’ which in the Nahuatl language means ‘flower’ and ‘something delicate,’” said Muray-Levitt, the manager of the Nickolas Muray Photo Archives, which licenses the late photographer’s images. “It is a painting of a flower composed of a stylized vagina receiving a penis from above. Muray’s private name for Kahlo was Xochitl, which he used in letters to her and she, referring to herself, in letters to him. Interestingly, Kahlo’s most famous portrait was made by Muray, and Muray’s most famous portrait is the same photo.”

Artistically, the couple generated equally intense heat, according to Sarah Quinton, the Textile Museum of Canada’s curatorial director and a curator of the show. “In terms of his bringing out her drama, the theater in how she wanted to be presented, her presence itself as a work of art — that’s where they brought each other out,” Quinton said. “He as a wizardly portrait photog, she as an exquisite specimen. That’s where there were sparks.”

Nickolas Muray was born Miklós Mandl in Szeged, Hungary in 1892, according to the official Nickolas Muray website. “Although his name appears in the Book of Birth Registration of the Jewish Community, he was not given a Jewish name,” the site notes.

Two years later, in 1894, Nickolas Muray’s postal worker father Samu Muray moved the family to Budapest in search of work and education opportunities. But the move proved harsh for young Nickolas. “Repeatedly humiliated by rampant anti-Semitism, he resented being denied, for being Jewish, opportunities given other boys,” the site notes. “He decided as a boy that he would one day see the world, and never be confined to the limitations imposed upon him by an unfair society.”

Levitt-Muray said her father never talked about that experience, but it seemed to scar him; Jewishness was largely absent from his adult life for fear “that Nazism would arrive in America. He feared for my mother and his children,” she said.

Muray emigrated to the U.S. in 1913, “armed with $25, a 50-word Esperanto dictionary, and an unrelenting determination.” Settling in New York, he managed to land a job doing engraving and color separation at a Brooklyn printing plant; in the meantime, he took English classes at night — “eager to leave behind any trace of his accent” — and declared himself an atheist.

Muray’s life in New York quickly became a charmed one. After setting up his own photo studio in Greenwich Village in 1920, his big break came almost immediately in the form of a commission from Harper’s Bazaar.

“As a child, I recall sitting on the stairs leading to our living room in NYC, and watching the action and thinking it was very exciting,” Muray-Levitt recalled.

He also became a championship fencer who represented the U.S. in the 1928 and 1932 Olympics, building on a passion he began pursuing in his teens. According to the West Coast Fencing Archive, Muray trained in Hungary with Italo Santelli, “the father of modern sabre fencing.”

In New York, Muray continued training with U.S. Olympic coach Giorgio Santelli, the master’s son, honing “a technique, speed, and brilliance surpassed by few,” according to the Archives. Muray ended up designing championship medals for the Amateur Fencers League of America, which named an annual tournament for him.

One of Muray’s A-list circle, the Mexican-born artist Miguel Covarrubias, introduced him to Kahlo while on a trip to Mexico City in 1931.

Handwritten letters between Kahlo and Muray, many on display in public here for the first time, document their subsequent affair that took place over the course of a decade.

While Muray’s profile has risen in recent years, and his iconic portraits have come to represent Kahlo in the popular imagination, the photographer’s name has largely faded from memory. A PBS film, “The Life and Times of Frida Kahlo,” didn’t even mention Muray as one of the “people in Frida’s world” on its web site.

Ironically, a book called “I Will Never Forget You…” compiled Muray’s stunning color photos of Kahlo in 2005. But until the Textile Museum’s exhibition, Muray’s role in Kahlo’s life hadn’t received the same attention as her other paramours and partners.

Muray’s photos, however, continue to rise in value; Muray-Levitt sells color-carbon prints of the Frida portraits for thousands of dollars through the web site. She also spends much of her time fighting image pirates. Unauthorized use of the portraits “is a huge problem, and I’m sure that sites like eBay and Etsy are only the tip of the iceberg,” she said. “I spend hours every month going through and alerting people that the images are copyrighted.”

Muray died of a heart attack in 1965 while doing something he loved: fencing. “As a fencer, he is already famous, counted among the top 20 American fencers of all time,” Muray-Levitt said. “I would like my father to be remembered as a self-made man, a man for all seasons, an artist and a gentleman. He was a pioneer in color photography in the United States, producing the first natural color advertisements in American magazines. As a celebrity photographer, he photographed everybody who was anybody.”

“Frida Kahlo: Through the Lens of Nickolas Muray” runs through September 7 at the Textile Museum of Canada in Toronto.

Michael Kaminer is a contributing editor to the Forward.